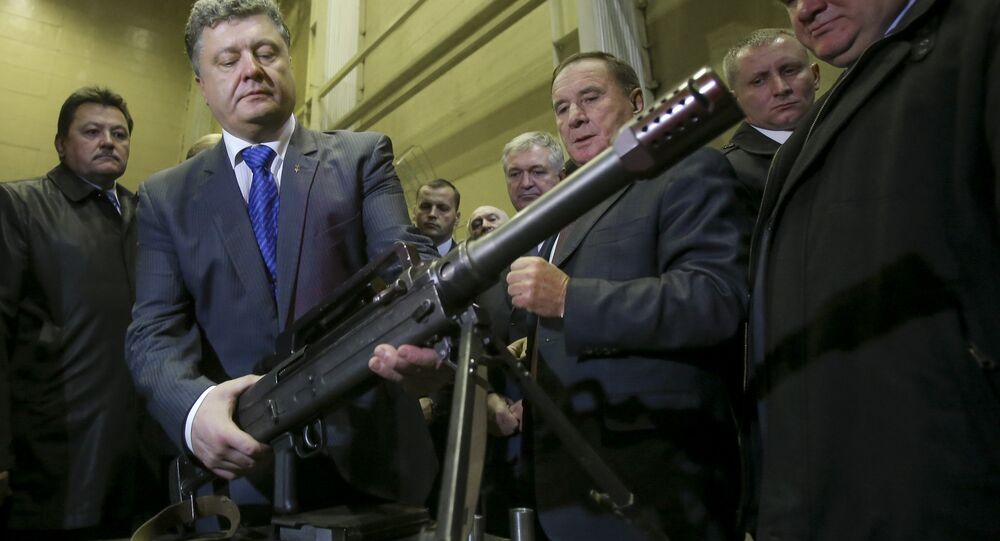 The announcement came as Petro Poroshenko visited Ukrainian military personnel in Kramatorsk. In his speech he stressed that now the country will be ready for war with Russia. Some users, commenting his post on Facebook, expressed skepticism concerning his promises.

Ukrainian President Petro Poroshenko has announced that his country is now ready to deal with "Russian aggression" and that he saved "nine grams [of lead]" for everyone who comes with evil intentions. Among dozens of amazingly similar supportive comments under the president's post on Facebook, featuring a video with his speech (with some of them being written twice — in Russian and Ukrainian, but for some reason from different accounts), there were a few Ukrainians who questioned the sanity of his enthusiasm for a military resolution of the conflict.

"Our soldiers should be at home with their families, not dying out there, while officials get even richer," a user named Maria Klimovich wrote.

"Oh shut up, you ass kissers! People will be sent to the slaughter, again! They have been doing it for 4 years now!" the user, named Alex Filman said.

"Why can't you people [crying out "we will be victorious!"] understand that no one is a winner in the end of civil war," another user wrote.

READ MORE: Moscow Calls on Ukraine's Western 'Patrons' to Stop It From Destroying Itself

"It's a real shame to see all this boot-licking. Bunch of Pro-Poroshenko bots, paid with the money that was stolen from the people [of Ukraine]," the user, named Valentina Svistun wrote.

Russians on social media were also quick to react to Poroshenko's speech, most of them suggesting another use for those "9 grams."

"Don't forget to save 9 grams of lead for yourself!" a user named Dmitry Balykoff wrote.

"Why doesn't your ‘Mr.' Poroshenko do a good deed and use those 9 grams for himself?" the user, named Gennadi Oreshkin wrote.

"Petro Poroshenko ate too many sweets with cognac and claimed in Kramatorsk, that he has ‘9 grams of lead' for everyone who invades Ukraine. He failed to mention whether he is going to save 9 grams for himself, just in case, or he is planning on fleeing to a neighboring country, just like his predecessor," another user wrote, alluding to the fact that Poroshenko owns the large confectionery manufacturing group called Roshen.

The deputy head of the committee on ethnic affairs in the Russian State Duma, Ruslan Balbek noted that threatening Russia is the only option for Poroshenko as his tanks are being destroyed in Donbass. He added that the main goal of such statements is to shift the attention of the Ukrainian people away from the real problems. Balbek also noted that Poroshenko uses expressions from Russian films in his anti-Russian statements, referring to the classic USSR film White Sun of the Desert, where the phase "9 grams to the heart" was used in one song.

The Ukrainian president signed the Donbass Reintegration Law on February 20. The law allows him to use armed forces inside the country without the consent of parliament. Also all notes on adherence to the provisions of Minsk agreements were removed from the finalized version of the document.

After the anti-government coup in Kiev on February 2014, supported by the western countries, two Ukrainian regions, Donetsk and Lugansk, announced their break away from the rest of the country and established independent republics. The Ukrainian Security Service (SBU) launched the so-called "anti-terrorist" military operation in the two Ukrainian regions in cooperation with ultra-right volunteer battalions, leading to the thousands of deaths, including among civil population.

Nearly 40% of Ukrainians Back Immediate Dismissal of President Poroshenko - Poll