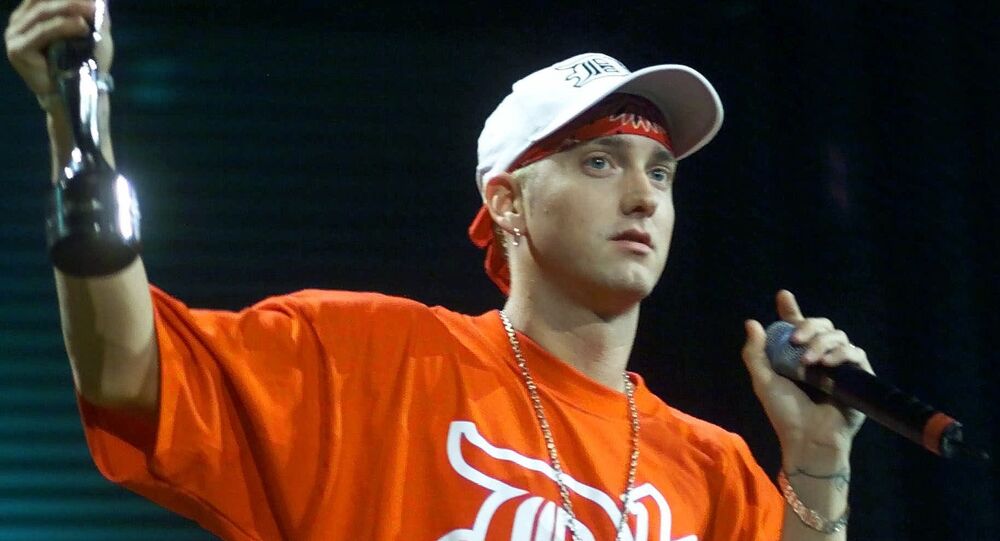 Continuing his run of politically charged performances, Eminem slammed the National Rifle Association (NRA) during his iHeartRadio performance Sunday night at the Forum in Inglewood, California.

The 45-year-old rapper, whose real name is Marshall Mathers, was introduced on stage by fellow Detroit rapper Big Sean and Alex Moscou, one of the survivors of the mass shooting at Marjory Stoneman Douglas High School in Parkland, Florida, last month.

Instead of singing the first verse of his single "Nowhere Fast," the artist broke into an explicit freestyle criticizing the NRA.

"This whole country is going nuts and the NRA is in our way," he rapped.

"They're responsible for this whole production/they hold strings, they control the puppet/and they threaten to take donor bucks/so they know the government won't do nothing and no one's budging/ gun owners clutching their loaded weapons/they love their guns more than our children," he went on.

The emphatic freestyle was met with enthusiasm by the live audience. However, some of the rapper's critics were quick to point to Eminem's gun-related incidents, including one in 2000 when he was charged with possession of a concealed weapon and assault and another gun-related transgression a year later for which he received a sentence of probation and community service.

​Eminem's attack on the NRA comes after the rapper Common condemned the group and the Trump administration during a performance at the Oscars earlier this month.

″On Oscar night, this is the dream we tell — a land where dreamers live and freedom dwells," Common rapped in the opening verse. "Immigrants get the benefits. We put up monuments for the feminists."

"Tell the NRA they in God's way. And to the people of Parkland, we say ase," he continued, referencing the West African concept that there exists a power to make things happen and enact change. "Sentiments of love for the people from Africa, Haiti to Puerto Rico."

During his freestyle performance, Eminem referenced Trump: "Any fan of mine who is a supporter of his, I'm drawing in the sand a line — you're either for or against — and if you can't decide who you like more and you're split on who you should stand beside, I'll do it for you with this: F*ck you."

"When I [put out ‘The Storm'], I felt that everybody who was with him at that point doesn't like my music anyway," Eminem told Billboard in January. "I get the comparison with the non-political-correctness, but other than that, we're polar opposites."

In an interview with New York Magazine published online in December, the Detroit rapper said the president "makes my blood boil."

"I can't even watch the news anymore because it makes me too stressed out," he said.