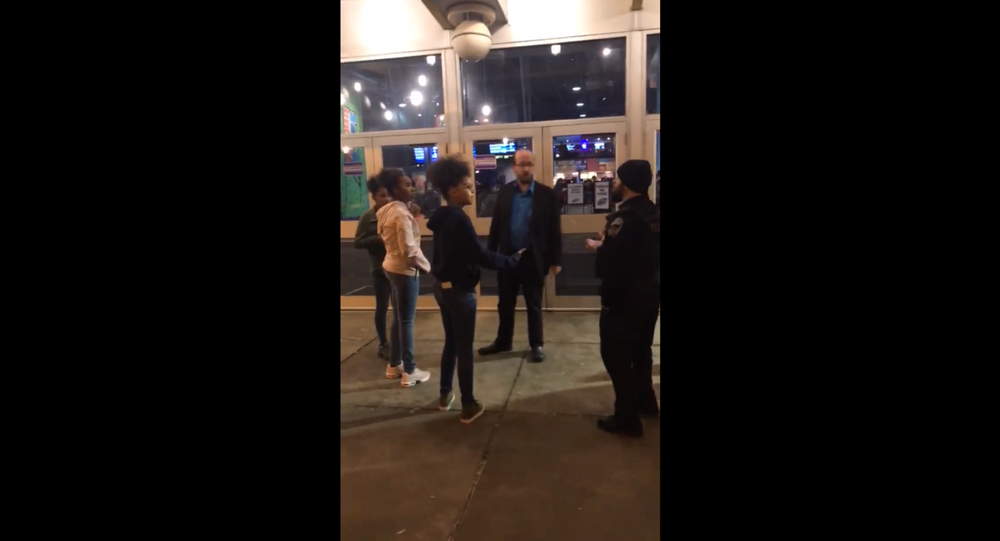 Pennsylvania resident Melanie Carter released video footage Thursday showing a North Versailles police officer arresting her for filming him kicking a group of teenagers out of a local theater.

The video, recorded on February 23, begins with Officer Christopher Kelly asking Carter for a lighter. The situation escalates after a manager at the establishment accuses a group of girls of starting trouble.

In the video post, Carter wrote that she got involved in the situation because Kelly was "pushing a young black girl out the door aggressively." Carter and the girls who were removed from the theater are African-American. The manager and Kelly are white.

"Listen guys, there's camera [footage], we've watched you guys," Kelly said, jumping into the dispute between the manager and the teens. "You guys have been a problem since you got here."

As Kelly tells the kids they have to leave, Carter remarks that both officials are treating the girls "like animals."

"Yeah, because you're behaving like an animal," the manager tells Carter, inching up close to the camera before walking away.

Screenshot/Jardiel Ochoa
WATCH: Cali Woman Goes on Racist Rant After Man Asks Her to Clean Up After Dog

Approaching Carter with a lit cigarette dangling from his mouth, Kelly tells Carter that she, too, has to leave because she's suddenly "trespassing."

"I didn't trespass anything, I didn't do anything wrong," she said while slowly moving away from Kelly, who pulls out his handcuffs. "I have not broken any laws… get off of me… what are you doing?"

After two minutes of recording the incident between the girls, the manager and Kelly, Carter ends up pinned to the ground and in handcuffs. Before the footage cuts out, the manager is heard saying that she's being arrested for "resisting arrest."

Within hours of Carter publishing the video, an internal investigation was launched by North Versailles Cinemas and the manager was fired.

"We determined that the manager's conduct does not reflect our values, his training or our policies," a statement from the theater notes. "This is certainly not the way we treat people and this manager has been relieved of his duties."

The statement later indicated that Kelly's actions were also reported to his superiors.

Carter, who was ultimately charged with disorderly conduct, resisting arrest, defiant trespassing and failure to disperse, is expected to appear in court April 19, the Post Gazette reported.

It is unclear if Kelly will receive any disciplinary action. The North Versailles Police Department has not released a statement on the matter.