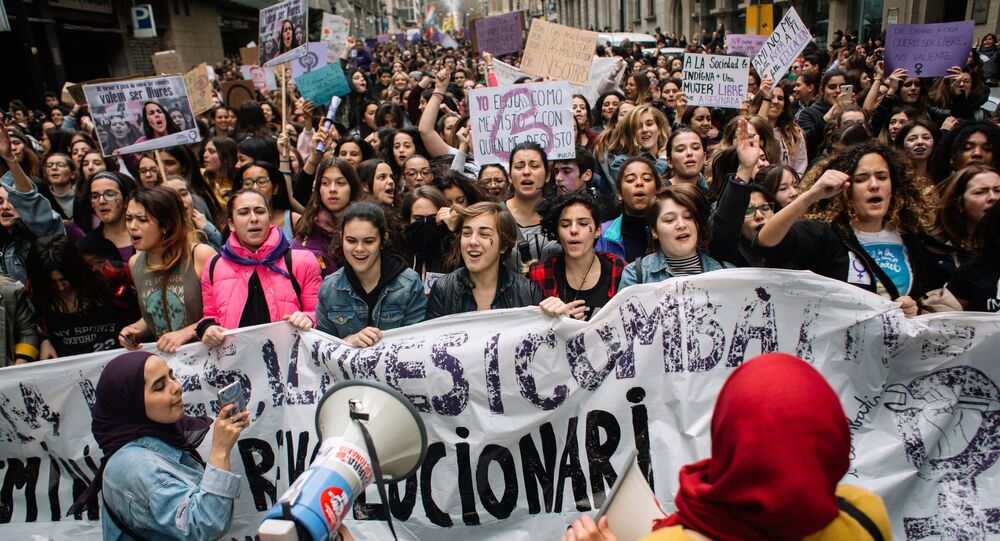 If We Stop, the World Stops: Women's Day Demos Around the Globe (PHOTOS, VIDEO)

Millions of demonstrators across the world took to the streets to mark International Women’s Day on Thursday. They were all inspired by the same celebration of the empowerment of women, although the goals of their rallies were different.

More than 5 million women attended the nationwide strike across Spain under the slogan “If we stop, the world stops.” Activists called on everyone to join to the 24-hour strike, trying to draw public's attention to the problem of the gender pay gap and violence against women. Female workers in Spain are said to earn 14.9 percent less than male ones.

Women were encouraged to give their household chores a rest and hang aprons over their balconies to symbolize a strike for the day.

The pot-banging rally, backed by a coalition of 10 unions, brought the country to a standstill, causing the cancellation of over 300 trains, disrupting service on Madrid’s subway and prompting traffic chaos in Barcelona as women blocked the streets.

Two female mayors of Barcelona and Madrid Ada Colau and Manuela Carmena supported the strike, aimed at ending the so-called “macho culture” in the country.

“The goal has been achieved. It is not only about claiming real equality, but about facing the need to change the relationship between the world and women. It is feminism. The world needs feminism,” Carmena wrote on Twitter.

The mass event was the first-ever nationwide strike held on International Women's Day in Spain.

The Eiffel Tower in Paris was lit up to honor women's rights; the message "Maintenant On Agit" ("Now We Act") was displayed on the monument as "a message to men and all of society, " Paris Mayor Anne Hidalgo said.

Demonstrators called for everyone who supported the rally to put down tools in their workplaces in solidarity with women. On the occasion, French daily newspaper Liberation pointed out that despite equal pay for equal work, French women earned on average 25.7 percent less than men, and asked men to pay 25 cents more for their paper on Thursday in solidarity with women.

Hundreds of protesters wearing pink and purple shirts gathered in Manila to demonstrate against President Rodrigo Duterte, denouncing him as one of the worst violators of women’s rights. Human rights groups have strongly condemned Duterte's sexist remarks, including one in which he ordered the military to shoot female communist rebels in the genitals to make them “useless.”

Duterte effigy in #internationalwomensday2018 protest in Manila, symbol of sexual attacks by military on women of the Philippines #IWD2018 pic.twitter.com/fBplxaV6S5

While singing and dancing, activists continued their rally in Plaza Miranda, handing out red and white roses to families of drug crime suspects murdered under Duterte's clampdown on illegal drugs.

International Women’s Day has amplified feminism in many Asian countries and Pakistan was no exception.

Minister of State for Information and Broadcasting Marriyum Aurangzeb says the women day celebrations across the country are an acknowledgement of women's sacrifices and their important role in different strata of life.#InternationalWomensDay pic.twitter.com/IJtBPx7lLs

Rallies took place across the country: in the capital Islamabad, in the largest city of Karachi and Lahore, Pakistan’s cultural capital, with female protesters holding banners demanding equal rights and better employment opportunities, denouncing violence against them such as the so-called “honor killings.”

India: My Body, My Choice

Indian women marched toward parliament demanding action for discrimination in the workplace, sexual assault, and domestic violence. Gang rape of women and sexual harassment of young girls has been a widespread practice in the country; and women do not want to tolerate it anymore.

“Unite against violence against women,” one banner read. “My body, My choice,” read another placard.

Protests were held in South Korea too; hundreds of women wearing black and holding black #MeToo signs, marched in Seoul. The anti-harassment campaign gained momentum in the country in January when a female prosecutor shared her experience of being sexually mistreated in the workplace.

© REUTERS / Kim Hong-Ji
Women attend a protest as a part of the #MeToo movement on International Women's Day in Seoul, South Korea, March 8, 2018

Hundreds of women marched in Kabul despite fear of the Taliban movement. Female protesters took to the streets to remind the authorities that there is much to be done to give Afghan women a voice, guarantee their rights and protect them from increasing violence.

Speaking about women in the country’s security forces, the head of the Afghan Independent Human Rights Commission, Sima Samar, said that they should report any abuse by superiors.

“Your safety represents the safety of all Afghan women,” she said.

Brave Iranian women gathered for a rally to protest against compulsory hijabs on International Women’s Day in Tehran. The police arrested some women for refusing to wear a veil, thus violating the Islamic dress code requiring them to cover their hair.

March 8 — Tehran- #Iran
Women's gathering in front of the Ministry of Labor on March 8th
Fierce control of the officers could not stop the chanting of women#WomenForce4Change #InternationalWomenDay #IWD2018#IranProtests pic.twitter.com/lyqCPaEYVY

@iamIqraKhalid, Do you know in Iran brave women face dire consequences by removing their headscarves in silent protest against religious controls imposed on them? Will you show solidarity with them or is criticism of Islamic regime in Iran Islamophobia?#March8_Iran #IWD2018 #M103 pic.twitter.com/IvPQvAASwq

Over 2,000 women rallied in Istanbul against growing violence and sexual abuses by men to mark Women's Day. They carried banners reading "Another world is possible!" "We defend our lives!" and "Stop femicide," shouting slogans condemning homicide against women.

Argentina: People Are Waking Up

Tens of thousands of people gathered in Buenos Aires to protest against violence and call for equality. The strike addressed the problem of femicide — one woman is murdered every 30 hours in Argentina.

“This year will be bigger than the last because we have historical momentum; each time more people are becoming more conscious, and people are waking up,” said Vanina Escala, a leader of the “Not one Less” (“Ni Una Menos”) movement that has organized marches against femicides.

El Salvador: Say No to Violence

El Salvador also joined the rally to call for an end to violence against women during International Women's Day.

I’m in San Salvador at a protest for women’s rights for #IWD2018 — women here are protesting against violence against women, femicide and for abortion rights pic.twitter.com/mXU2fM348l

A big crowd moving through the streets of city centre. Chants include: “if you assault one of us, you assault us all.” And “the streets are ours.” pic.twitter.com/yHqAcNXKCW

This teenager wearing a #niunamenos scarf around her face while hula hooping is a Mood. #iwd2018 pic.twitter.com/hr0DYxlqPv

This little girl: “I have two moms that want to protect and take care of me.” #iwd2018 #niunamenos pic.twitter.com/txYK0AvTy1

Two ladies holding a #niunamenos means “not one more” — it’s a rallying cry for the murder of girls and women to stop. pic.twitter.com/zO5s9BcVRq

A lot of signs in support of reproductive rights — here in El Salvador abortion is still illegal, and women are jailed if they have the procedure. pic.twitter.com/KP2pQR9M60

The United Nations headquarters in New York was filled with female empowerment as Women’s Day was marked by a panel featuring prominent Hollywood star Reese Witherspoon.

She has been campaigning for women’s rights for a long time now, stressing the need to narrow the gender pay gap even in the film industry. Witherspoon was the one who helped to kick-start the Time’s Up movement against sexual harassment.