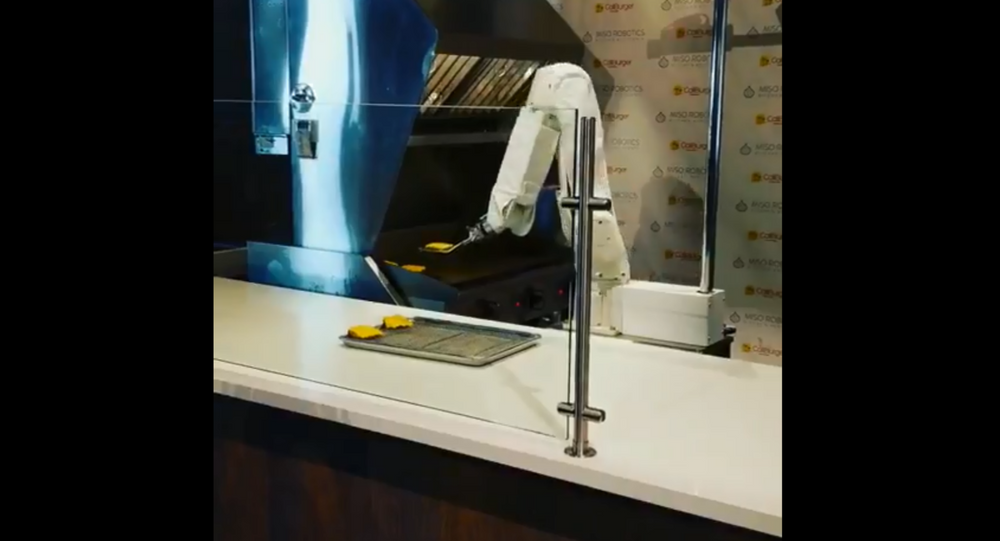 Move Over Spongebob! Burger-Flipping Robot Takes Over Grill at CaliBurger

After a long two years of conducting tests and making adjustments, Miso Robotics and CaliBurger unveiled Flippy, a burger-flipping robot, on Monday to a crowd of spectators eager to witness the bot's abilities.

With a hefty price tag ranging between $60,000 and $100,000, the robotic assistant can do anything from flip burgers, change spatulas and even use a scraper after each set of burgers cooked to order.

​Although Flippy can do the majority of the work solo, the robo-grill cook did get its own assistant on Monday as a fellow employee worked alongside it for seasoning purposes. However, once the secret spices and bits of salt were tossed on, Flippy showed off his burger skills by continuously monitoring temperatures and even taking burgers off the griddle to make sure they had cooled enough before they were to move down to the next line cook.

"People see a robot, they hear ‘robot,' they assume ‘job replacement,'" David Zito, CEO of Miso Robotics, told USA Today. "This isn't about replacing jobs. This is about a third hand in the kitchen."

Though mistakes can be made by robots, Zito says that those mistakes will simply become learning opportunities for Flippy.

Dealing with a high turnover rate and an ever-increasing demand for prepared food, CaliBurger partnered with Miso Robotics in 2016 to create the first robotic kitchen assistant that could help out at the restaurant's Pasadena location.

Speaking with KTLA, Zito told the local news station that "the kitchen of the future will always have people in it, but we see that kitchen as having people and robots."

For John Miller, the CEO of Cali Group, the company behind CaliBurger, will also provide hungry customers with a sense of "consistency."

"The key to success in the restaurant industry is consistency," Miller told KTLA. "So anytime you go to a CaliBurger anywhere you know that the patty will be cooked exactly the same."

Though it's clear Flippy will take jobs away, it's unlikely that people will end up on the unemployment line because of Flippy-like bots taking over the restaurant industry, according to Julie Carpenter, a research fellow with the Ethics and Emerging Sciences Group at California Polytechnic State University at San Luis.

"People might think it's cool or [they might get] angry that machines are taking over," Carpenter told USA Today, suggesting that restaurants will still need actual humans to operate stations.

If you're wondering whether a robot-made burger tastes better or worse than a human-made one, rest assured, there was no difference, according to reporters invited to the event.

Flippy is just one of 50 robots that CaliBurger will use in its establishments across the US.