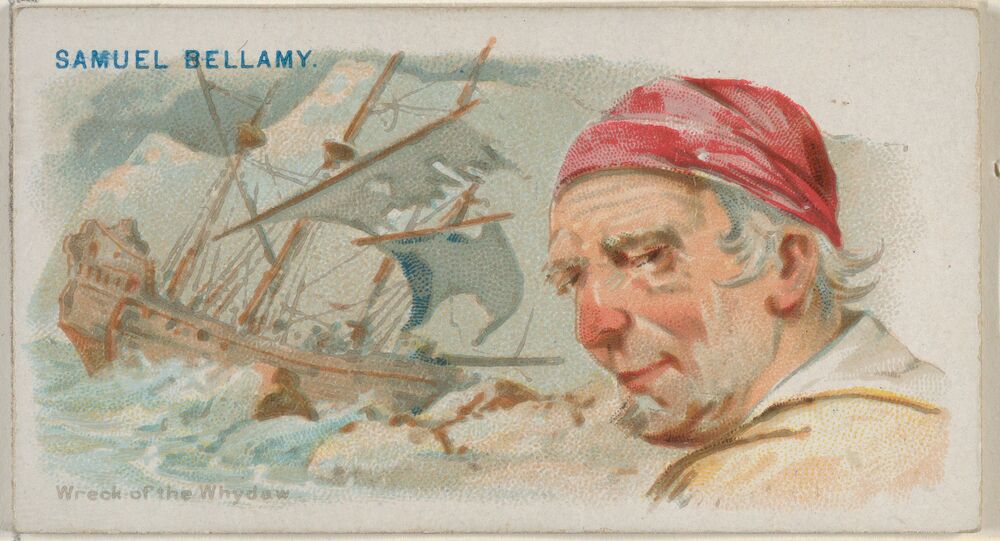 Researchers are now conducting a series of DNA tests with help of the corsair's living English descendants.

This Monday, Whydah Pirate Museum in Massachusetts displayed the supposed corpse of Captain "Black Sam" Bellamy, an infamous pirate, who accumulated unprecedented wealth before perishing at sea over three centuries ago.

The latest archeological discovery constitutes a notable breakthrough in the efforts to identify Bellamy's corpse ever since the remnants of his ship, the Whydah Gally, were discovered off the coast of Cape Cod in 1984.

Speaking to the Daily Telegraph, director of the museum's ship exhibit Chris Macort stated that it is highly likely that the body belongs to Bellamy and not to one of the 40 sailors, who sank with their captain during one of the most violent storms ever recorded.

"There's a very ornate pistol that was wrapped in a ribbon," Macort noted.

"It's expensive so that might have belonged to the captain, so that's another indicator for us that it's more probable for us that it is Bellamy".

© Photo : imomi.unn/Lobachevsky State University
Russian Archeologists Discover Ancient City’s Artifacts in Crimea
By the age of 28, Bellamy and his crew successfully raided over 54 ships along what now is the US east coast, hoarding treasure worth some $120 million in today's currency, making him the world's richest pirate.

The pirate was known as "the Prince of Pirates" for his lavish lifestyle and love of fancy clothes; he originally hailed from Devon, England.

In fact, according to Macort, living descendants of Bellamy still reside in the UK and are actively helping the researchers with DNA identification procedures.

"They came to the museum two years ago and showed the paper work, including Bellamy's mother baptizing Sam at their parish," he said.

The archeologists had to overcome significant obstacles in their effort to extract the pirate's corpse, as the shipwreck is buried under 40 feet of water and sand, and the site is frequented by great white sharks.

"We call it an exploded site — it's kind of like throwing a jigsaw puzzle in a washing machine," Macort said.

Nevertheless, the researcher emphasized the importance of further exploration of the site, which he described as "a real time capsule", which may shed more light on the fate of the infamous pirate.