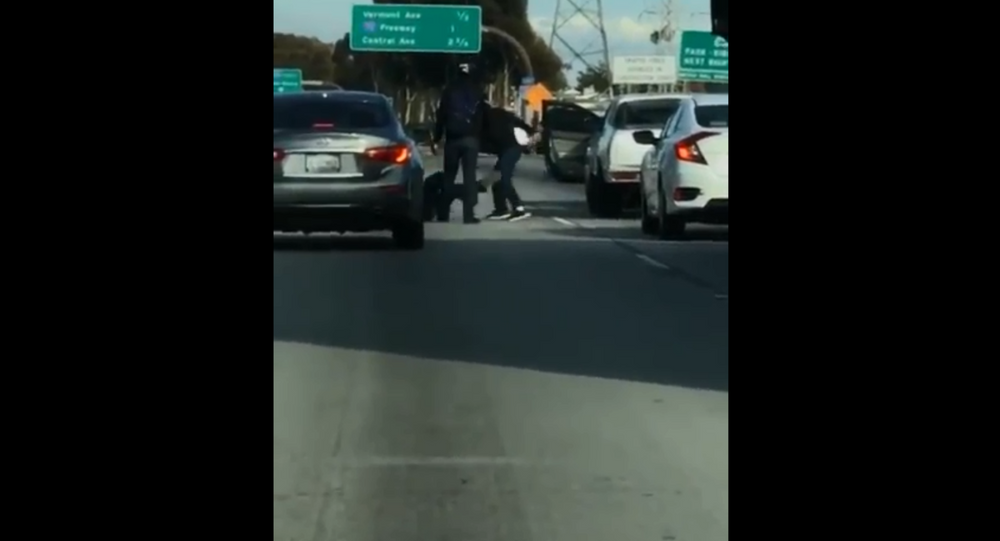 On top of already dealing with typical traffic on California's 105 Freeway in Los Angeles, commuters Wednesday were given front-row seats to a fight between two grown men.

Filmed by driver Brittany Torres, the footage shows two men exchanging punches before one falls to the ground. Two bystanders later intervene to break up the brawl after the two men appeared to get ready for a second round.

​"It was something I've never seen. All I saw was just blood all over his entire face," Torres told CBS LA. "I've seen road rage — people flipping people off — but I've never seen this before."

"We don't know if they crashed and hit each other. I don't know if it was road rage," she added. She noted that the situation could've gotten worse if a gun had been pulled out.

"It's scary," she told the station. "You don't know if bullets will fly and if I had my kids I probably wouldn't have recorded it."

When speaking with KABC, Torres also noted that when the man driving the silver sedan attempted to drive away, he ended up crashing into an embankment on the freeway.

The California Highway Patrol is now investigating the altercation. It is still unclear what caused the fight.

‘The Fire is Out of Control’: Blazes Fueled by High Winds Sweep Los Angeles