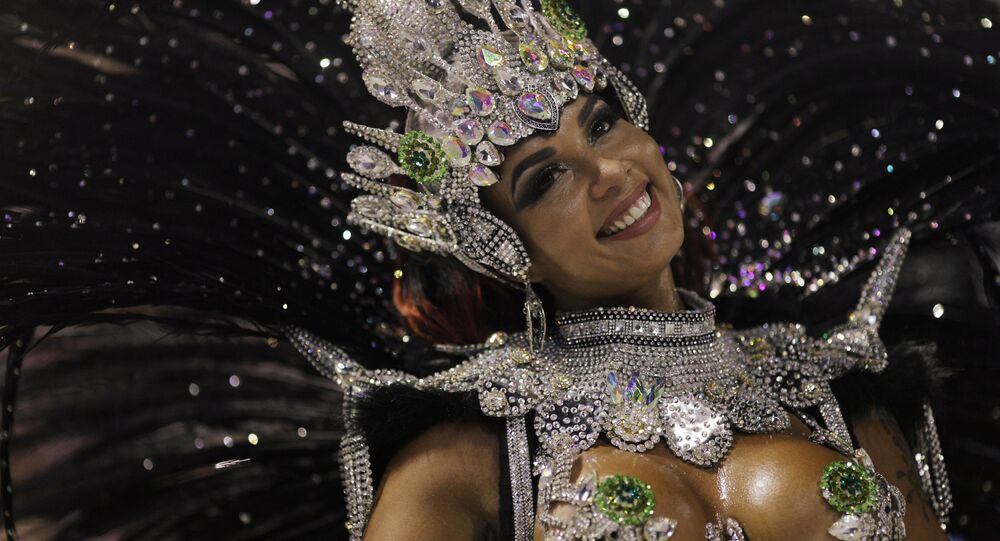 Meet the Dark Side of Brazil's Legendary Rio Carnival

Brazil’s female samba dancers the spill the beans on the darker side of working at the iconic Rio de Janeiro Carnival.

Viviane Morais Ferreira Guimarães, 24, works for a living as a street pizza saleswoman, but when the Carnival is in full swing, she dons her garbs and represents the Unidos do Porto da Pedra school.

As she told Sputnik Brazil, the Carnival brings both joys and woes to its participants.

"The image of a woman in Carnival is very complex, not just for those on the ‘inside’ but for the people on the ‘outside’ as well. We are really being regarded as objects. The sensuality and the bodily aspect that are intrinsic to the dancers, they are not bad by themselves. However, when we dance we represent our block, and people seem to be unable to differentiate between these aspects," Viviane said.

Viviane explained that female dancers have to deal with this kind of prejudice both at dancing schools and in everyday life, and that she has been approached to become a prostitute on numerous occasions.

Her concerns were echoed by Rayane da Silva Ferreira, a dancer representing the Acadêmicos do Salgueiro samba school, who claimed that the image of a female dancer at the Carnival is being "overly sexualized."

"We are being harassed always and everywhere," Rayane said.

And Fernanda Florentino, representing Império da Tijuca, Paraíso do Tuiuti and Lins Imperial, also confirmed that sexual harassment toward dancers is not limited to carnival performances.

"I experience indecent behavior of others towards myself every day, even outside of the Carnival. I’d even say that women get even more respect during the Carnival," she remarked.

A samba dancers’ family life is often fraught with complications.

For example, Rayane ended up divorcing her husband who was against his wife’s love of carnival dancing.

According to Ariane, she also often encounters a peculiar form of prejudice when people immediately assume that she’s a samba dancer because she’s black.

"They tell me ‘Oh, you’re from Rio, you’re black, so you must be a samba dancer.’ No! Why they assume that I have to be able to dance? Because I have black skin and I’m from Rio? No!" she fumed.

"They think that if you’re a samba dancer they have a right to caress you and say something salacious, but that’s not true. We come to the Carnival because we like it. Samba is a dance. We dance because we want to make people happy, not to listen to these bawdy jokes; they’re so unpleasant," Ariane said.

Carnival as a Symbol of Liberty

Dr. Rosane Borges, who teaches journalism at the University of Sao Paulo, pointed out however that the Carnival always was, and still is, a form of cleansing oneself from sin; it is a realm of pure freedom so it’s small wonder that the image of a woman is being sexualized, often up to a point of vulgarity.

"A female body – whether it belongs to black woman or white doesn’t matter – is displayed during the Carnival simply as a beautiful body for everyone to see, there are no strict censorship limits there," she explained.

Borges noted however black women and mulattos are being discriminated against, and that an old proverb recorded by the sociologist Gilberto Freyre – “white to marry, black to work, and mulatto to fornicate” – sums up the tensions that are being exposed during the Carnival.

She added that women’s role in Brazilian society is essentially the result of a collective image of women created by mass media.

"Society is being fed these images, these paradigms that say what is a black woman and what is a white woman… I call it a two-way street. These images, these symbols are being discussed and relayed by the media which is a part of society," Borges surmised.

Happy No Matter What

And yet despite all these grievances, it appears that Brazilian women have no intention of abandoning their country’s carnival traditions.

For Viviane, dancing at the carnival helps her forget about everyday problems.

"When I start dancing, when I hear the bateria’s rhythm, I become a completely different person. It is a character that exists there to be happy and to interact with the audience. When I see a child, a girl looking at me just like I once looked at dancers when I was a child myself, it is a magical feeling,” she said. “I cannot live without samba anymore."

"I’m in love with the samba school whose honor I uphold, and when I die I think they’ll put a Salgueiro crest on my coffin. Even if at some point I’ll have to leave the school, it will forever remain in my heart… This passion can only be explained via bateria," Rayane added.