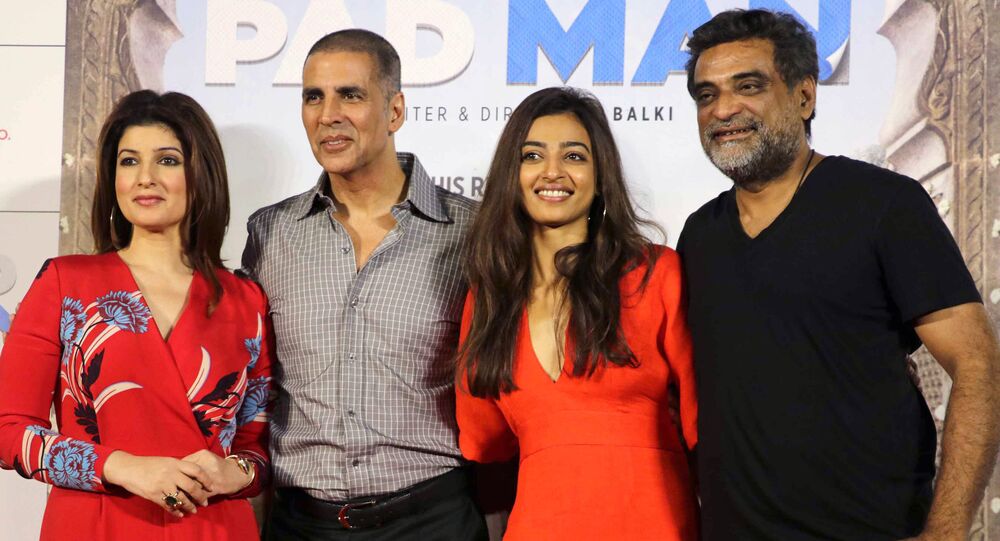 The Pakistani government’s “against our culture” excuse to ban "Padman," an Indian mainstream film dealing with menstrual hygiene, has become the latest target of rage and mockery on social media.

New Delhi (Sputnik) — Padman, an Indian film that has, to a large extent, succeeded in disassociating shame and menstruation, has failed to get the Pakistan censor board's approval.

"We can't allow our film distributors to import films which are against our traditions and culture," Pakistani Federal Censor Board member Ishaq Ahmed was quoted as saying by the Pakistani media.

The decision to issue an NOC by the Ministry of Information Broadcasting National History and Literary Heritage is yet to be taken on the release of a foreign feature film "Padman" as the film has not yet been pre-viewed by the Central Board of Film Censors. pic.twitter.com/NExGsWGV8M

Ironically, the film is based on the life of a man's struggle to fight the taboo associated with menstruation and sanitary pads in Indian society. Akshay Kumar plays Arunachalam Muruganantham, from south India who is credited with revolutionizing sanitary pad manufacturing by innovating cheaper machinery. The film also stars Radhika Apte and Sonam Kapoor as female leads.

The Censor Board says, “the film deals with taboos such as menstruation which are against our traditions & culture thus can’t be released in Pakistan.”

I think we should just hand the country over to extremists and backward jaahil people.

Those banning should know this “taboo” topic is the reason they are alive. No menstration means no fertility. No fertility 4 means no babies. Banners were babies 2 na. Nature se bhi panga. Leh. Apas ki baat. 🙄 Misogyny much? ‘PadMan’ banned in Pakistan https://t.co/ANkxyt194i

Punjab film board can't watch #Padman but will have no problem seeing lecherous men slobber over a haplessly objectified heroine. #ReleasePadman #WeirdPriorities https://t.co/goJOfEYStW

Those vouching for the movie's relevance in the Pakistani society included some of the country's top journalists.

Yes, Pakistani Women menstruate too. I support #Padman and menstrual hygiene. Ban on @PadManTheFilm in Pakistan is senseless. Release it now. pic.twitter.com/KpsTL6Rc3a

It's wonderful to see Pakistani actresses, journalists and activists speaking up against the ban on PadMan in Pakistan. Films, notwithstanding where they are made, that focus on changing regressive views on women-oriented issues need our categorical support. @akshaykumar

​#Padman should have released in Pakistan also. This film is equally relevant for pakistani audience as well. Hope pakistan censor board will change their mind & release it in pakistan.

Criticism also came in the form of spoofs that left many amused.

Akshay Kumar starrer Padman banned in Pakistan, Pakistan Censor board Chief Fakhr-e-Alam says 'Our women don't need sanitary pads, Pakistani men are smart, they make sure their women are always pregnant so they don't need to use pads'. pic.twitter.com/FtZ171ZkBB