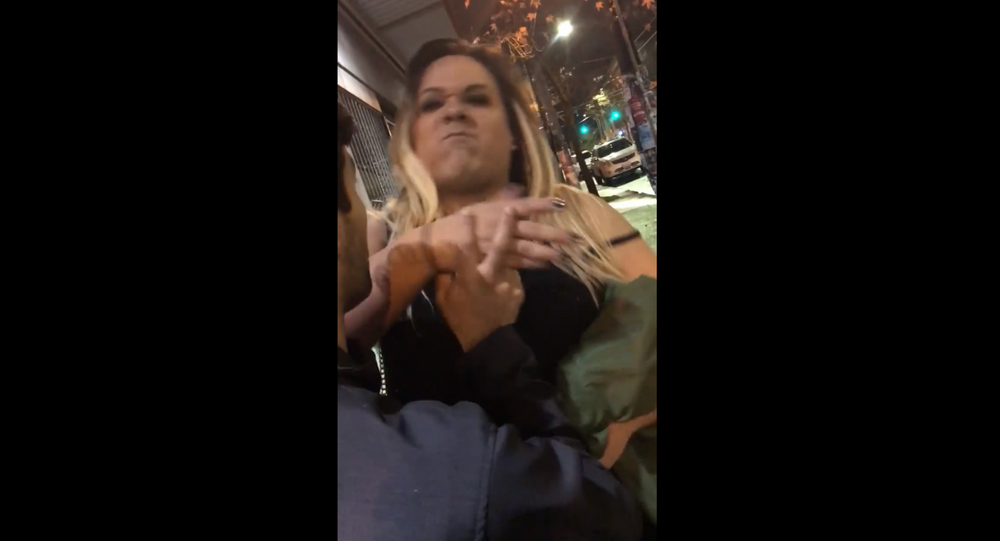 On Saturday, Aditya Sastry, Joey Velez and Tom Krajnak were in Seattle, Washington, minding their own business as they lined up to get a pizza when they became the targets of a woman's racist rant.

According to Sastry, who filmed and later posted video footage of the altercation on Facebook, the unidentified woman was already in the middle of verbally assaulting other locals when she chose to zero in on the group of friends.

"Something about us caught her attention and she began a racist, xenophobic rant followed by threats and assault," Sastry wrote in the Facebook post. "The video ends after she slaps my phone out of my hand, shattering it, but the confrontation continued with escalating racism and threats of violence primarily against Joey, the black woman next to me and myself."

"It became quickly apparent that her issue was with Joey and my appearance as we are ethnically Puerto Rican and Indian, respectively," Sastry added.

In the video the woman can be heard repeatedly asking members of the group where they're from and informing them that "you're not white."

Though the group ultimately decided to move away from the woman, their attempt at de-escalating the situation failed as she continued to follow them.

"You ain't white enough b*tch… get the f**k… go back to your own f**king country," she continues. "I'll have you arrested so f**king quick, I have my papers on me b*tch."

The footage abruptly cuts off after the woman smacks Sastry's phone to the ground.

Sastry later wrote in his Facebook post that this was the second time he was "accosted by white Americans claiming this country is theirs."

"Both these incidents occurred in the ‘sanctuary cities' of Boston and Seattle," Sastry wrote. "I was born and raised in this country and have been blessed with opportunities that don't exist or aren't as accessible elsewhere, but I find myself having a more and more difficult time feeling welcome in my own country."

Speaking to Q13 Fox, Sastry explained that the content of the footage is an important illustration that racism can happen anywhere.

"I think the content is very important because you see these things and you think that happens somewhere else. And I've said it to myself many times; however, that's not the case. This happens everywhere," he told the local station.

An investigation has been launched by the Seattle Police Department.