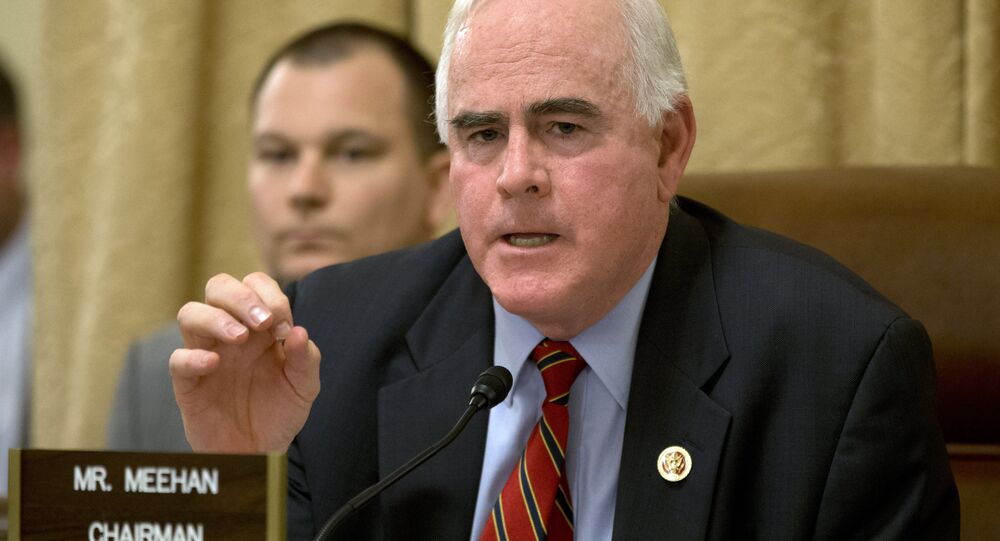 The US House Ethics Committee has opened a probe into the alleged sexual misconduct of Representative Patrick Meehan, who reportedly used funds from his congressional office to settle a complaint filed by his former female aide.

Patrick Meehan, a 62-year-old Republican from Pennsylvania, has claimed that it was his much-younger aide who prompted his intimate communications with the woman, according to the New York Times.

"That I would find later that that was not something that she was comfortable with, really hurts me. This was a person who specifically invited communication with me so that she would be able to have the ability to be there for me," the newspaper quoted Meehan as saying.

His remarks came shortly after the US House Ethics Committee began an investigation into Meehan allegedly misusing official resources from his congressional office to settle the woman's sexual harassment complaint.

The New York Times cited sources familiar with the case as saying that the aide left Meehan's office to file the complaint, in which she alleged that Meehan "became hostile after she rebuffed his romantic overtures."

Earlier, Meehan vehemently rejected all the accusations, saying that he didn't do anything wrong.

Twitter users were quick to react to the scandal, with some calling for the immediate resignation of Meehan.

So it’s been 48 hours and I’ve yet to hear a single Republican call for Pat Meehan to resign. Exposes that they refuse to take sexual harassment seriously.

It's time for @RepMeehan to quit. I don't care what party you belong to. Sexually harass someone? You have to go.#MeehanOUT pic.twitter.com/OTlTlxGYQj

Others commented sarcastically about Meehan blaming his aide for their connection.

Patrick Meehan is really living the dream of every aspiring elected official: skate by in a notoriously gerrymandered district, use taxpayer dollars for sexual harassment settlements, and run for reelection even while it's all falling apart around you

Pennsylvania GOP representative, Pat Meehan, says he didn't sexually harass one of his assistants. Says he only take her out for ice cream. She accused him of sexual harassment. He paid her off with taxpayer dollars

One ice cream cone at a time

Rep. Patrick Meehan has been accused of sexual harassment. He's actually blamed his indiscretions on, wait for it, OBAMACARE!!! I couldn't post the article. I hope you can find it. Unbelievable!!!

The Meehan aide's complaint comes amid the alleged sexual harassment scandals involving world-famous celebrities, including Harvey Weinstein and Kevin Spacey, as well as politicians in the US and several European countries.

In December 2017, Al Franken stepped down from his post as the Democratic Senator from Minnesota due to a spate of sexual misconduct accusations against him.