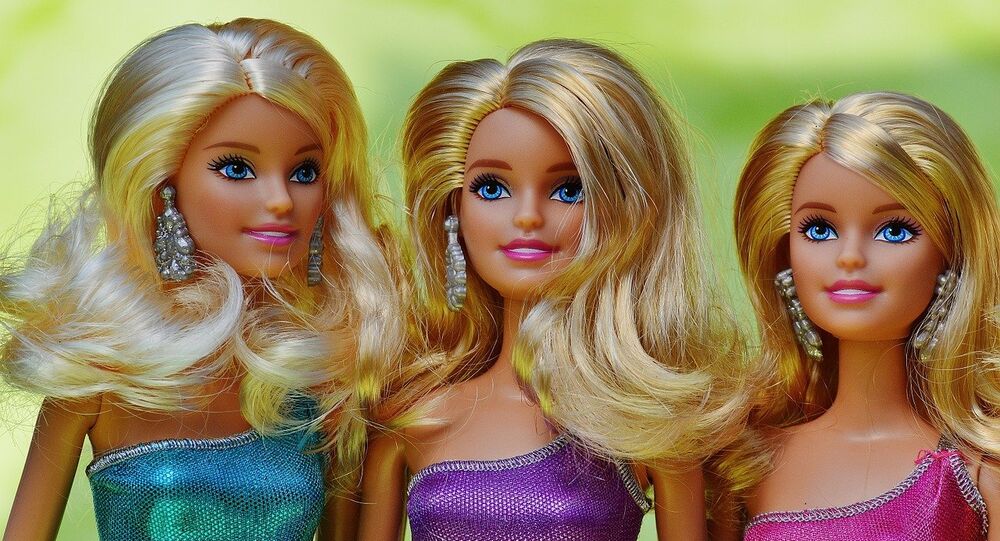 Nowadays people can hide almost any imperfection with the help of plastic surgery and make-up. However, being “humanly beautiful” is not enough for some individuals – they invest maximum effort to transform themselves into living dolls. Take a look at some of the most famous Barbies and Kens who have chosen a fantastic “life in plastic”.

Barbie has always been adored by girls and women from across the globe. Some of them were so desperate to look like the iconic doll that they fearlessly agreed to go under the surgeon's knife not once but as many times as their appearance required.

This 46-year-old lady from South East London, UK, has so far spent more than $25,000 and 11 years to get closer in appearance of her favorite doll. Rachel not only enlarged her breasts and changed the shape of her nose, face and cheeks, but also asked a surgeon to make her lips "freeze" in a permanent smile. "I feel like Barbie, I think like Barbie and I am Barbie. I think me and Barbie are the same person. I am a human doll," Ms. Evans says about herself. She stars in a reality show called My Barbie Body and is looking for a partner who is similar to Ken and ready to raise a child.

A lot of crazy fans come from Barbie's homeland. One of them, Nannet Hammond, a mother of five from Cincinnati, Ohio, owned more than 50 Barbie dolls as a child and always wanted to look like them. Her old dream came true with the help of her husband who paid a fortune for her breast lift and augmentation, changing her lip shape and the placement of dental veneers. Nannet, whose entire transformation cost about $500,000, also bleached and straightened her auburn curly hair, applied permanent make-up and tanned her skin.

The woman with a pink cabriolet actively shares pictures of her beautiful dolly life on Instagram.

Ophelia, a resident of Los Angeles, also loved Barbie dolls since her childhood, asking Santa to bring them every Christmas. As she grew up into a 30-year-old woman, she spent $35000 on fillers, botox and other beauty treatments in a quest to look like the classic doll.

Ophelia, who prefers to be called the Anime Barbie, is not going to stop in her transformation: she is saving money for breast and buttocks augmentation and is considering removing four to six ribs. Every day she wears special lenses and spends a whopping three hours for make-up to visually enlarge her eyes. The woman admits this often wards men off, but she hopes to find a partner among her enthusiastic subscribers on Instagram.

This Russian real-life Barbie, Valeria Lukyanova, has been making headlines since 2012. Though being persistently called the human version of a plastic doll, she boasts a number of talents as a model, a writer, a poet, a singer, a DJ, a lecturer and even a spiritual leader who conducts trainings for astral travels.

Valeria prefers to keep her age a secret and denies having any plastic surgeries except for her breasts. She also insists that her photos are left unedited — she explains the perfection of her appearance by persistent hard work on herself.

This surgery-loving native of the Swedish city of Gävle had three nose surgeries, three rib modifications (and a total of six ribs removed), an eyebrow lift and four breast operations spending more than $140,000 on it. Twenty-six-year-old Pixee claims to always have felt "trapped in her old body" and described her struggle as similar to that of a transgender person.

Angelica Kenova, a "Human Barbie" from Russia's Kurgan doesn't only look like a living doll, but is often treated like one. Since childhood, her parents styled her as a little princess. However, they were strict enough and never let her go out, date boys or have typical adult experiences.

Now Angelica, who claims to be a model, child psychologist and even a ballet dancer, she regularly poses for half-naked photos with her parents' approval.

As it turns out, not only girls admire perfect dolls — some men are eager to imitate the ideal plastic toys too. One of the most famous real-life Kens, Rodrigo Alves was born in Brazil's São Paulo to a family of British migrants 34 years ago. He performed 60 plastic surgeries and more than 103 cosmetic procedures in his lifetime, spending some $700,000 for his perfect appearance. The man, who prefers to be referred to as "Roddy Doll," believes that he was born in the "wrong" body, which is why he constantly tries to fix it.

He doesn't see anything shameful in plastic surgery: in his opinion, this should be a routine practice. Alves visited 56 TV shows around the world and was featured on the pages of Vogue and GQ. The man even considers a sex reassignment surgery, saying that women grow old in a more beautiful way.

This 36-year-old man from the US decided to go under the knife after being inspired by the show Lifestyles Of The Rich And Famous, where all participants were doing plastic surgeries. "That's what the rich do," this is how Justin, who grew up in a poor family, explained his passion. Since the age of 18, he has focused on his transformation, saving money on journeys, cars, furniture and even Christmas presents. In total, he has performed 190 operations and more than 340 cosmetic procedures. He removed ribs and inserted several implants into his back to look like a superhero.

For three years Jedlica was happily married to a rich businessman who encouraged his hobby, but in the end this constant race for perfection tore them apart. Now Justin is single and is looking for a soulmate.