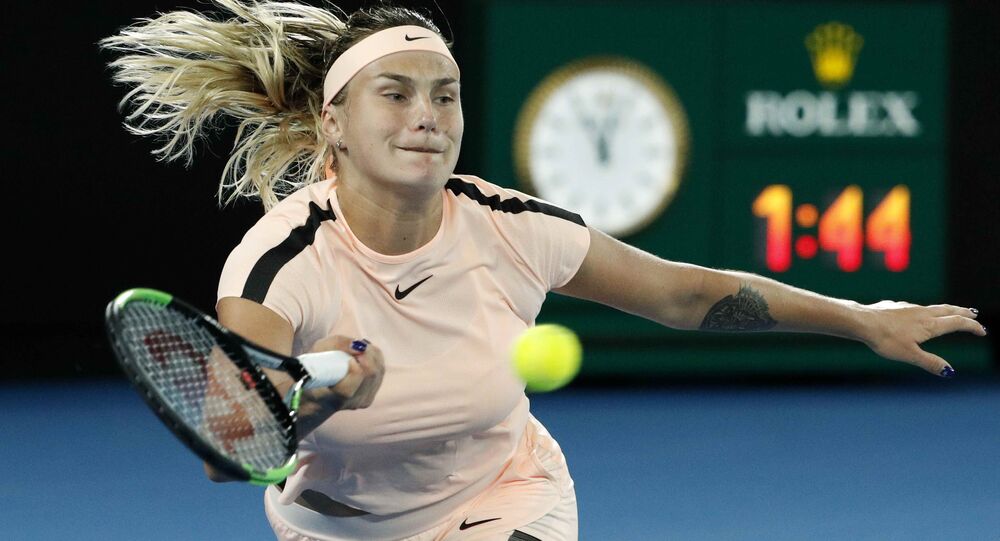 The crowd at the 2018 Australian Open showed no mercy on Aryna Sabalenka as they ruthlessly mimicked loud grunts of the hard-hitting teen player during her match on Tuesday night.

On January 16, Ashleigh Barty beat Aryna Sabalenka in all three sets; however, this Australian Open match held in the Rod Laver Arena will most likely be remembered not for the Australian No1's victory but for the criticism levelled at her Belarusian opponent's grunting.

🇦🇺 @ashbar96's fighting spirit on display in this point. @SabalenkaA has maintained her aggression, and Barty's guile has come to the fore. #AusOpen #7Tennis pic.twitter.com/qXHTzk3w1m

As the 19-year-old pro tennis player from Minsk screeched after almost every strike of the ball against Barty, the pitiless audience started to openly mock Sabalenka's screams between points.

"Ladies & gentlemen please, during the rally, do not scream."

At one point, the umpire asked the viewers to stop imitating the sounds as a courtesy to the players but they only responded by making their grunts even louder.

Barty, who was seen shaking her head, didn't seem to be pleased by the crowd's behavior at all. After the game, she was asked if her opponent's screeching had affected her.

"I think if something that small can irritate you, that's a bigger issue in itself," she said. "I knew it was coming. I was prepared for it," the Australian player told the media as reported by Australian Broadcasting Corporation.

People who watched the match on TV took to Twitter to express their concerns over the issue.

It's totally unacceptable the amount of 'noise' coming out of Aryna Sabalenka's mouth as she hits most of her shots. It must be a distraction to Ash Barty. It's ruining the match. #AusOpen

I do love everything else about Sabalenka's game, and hate that the grunting is going to overshadow it for so many. Wildly bold, heavy metal tennis. #AusOpen

Just imagine (well, you don't need to, I have a video) how bad other sports would be if we had to endure Aryna Sabalenka's grunting. Interestingly, the crowd can't make a sound. Ah, tennis. pic.twitter.com/rUlfyhTfmq

Nice player #Sabalenka but something needs to b done about her noise and grunting on court!!!! @WTA change channel #watchsomethingelse

Good on them, screaming was excessive, pointless and unnecessary.

She deserves to be mocked

Other netizens took Sabalenka's side, feeling bad about the disrespectful way Barty's fans treated her.

Disgusting crowd, @AustralianOpen should do something about it, peole like that can't be allowed to disrespect players like that 😒

I will forever stan Aryna Sabalenka. What a talent. And what a bad behavior from the crowd…..

Anyone who complains about women tennis grunting especially Sharapova or Sabalenka or Schivone or Vika or Serena or Venus or Konta etc etc. can turn the channel. It is 2018. They grunt. They play. They fight. They win. GET OVER IT 👋🏼 #wta #ausopen #dblstandard

Respect for Ash's disapproval at the crowd mocking Sabalenka. It's gross, she's 19.

Controversy over grunting tennis players is nothing new, with Maria Sharapova, Victoria Azarenka, Novak Djokovic, Rafael Nadal and the Williams sisters known as loud vocalists on the court.

Meanwhile, the WTA said in a statement to AFP that Sabalenka's actions weren't an issue in their eyes.

"Grunting is a natural part of the game; there is a correlation between breathing, a forceful exhale and power," the WTA noted. "Excessive grunting doesn't seem to be an issue that affects players."