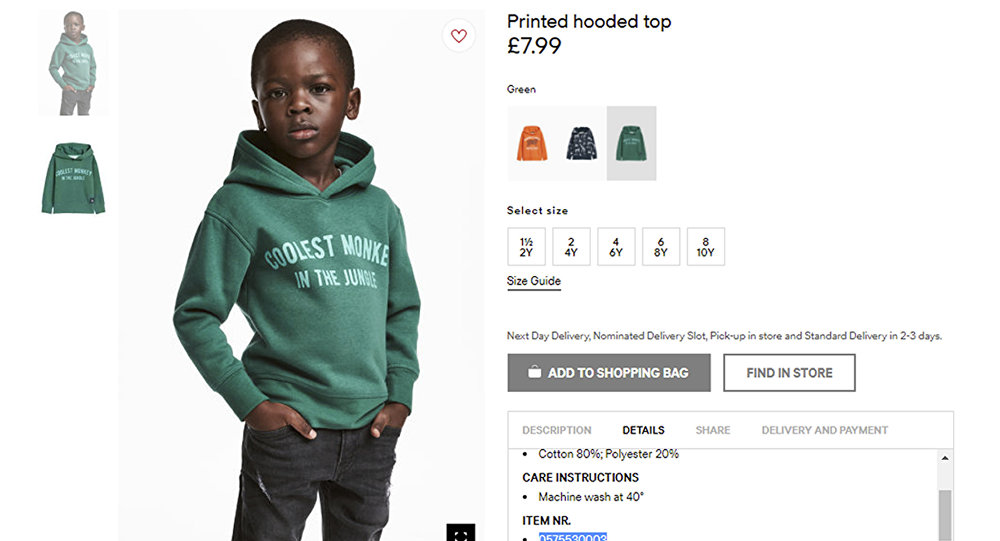 The family of the black child model has moved out of their home in Sweden for security reasons after inadvertently becoming the focal point of the uproar caused by the clothing giant H&M's controversial ad, which many deemed "racist."

According to Terry Mango, the mother of the child, the family had to leave their home in Stockholm for security reasons. The boy's father Frank Odhiambo concurred he was worried about the family's safety after the story received worldwide attention.
Last week, an H&M catalogue photograph of five-year-old Liam Mango, clad in a hoodie that read "the coolest monkey in the jungle," went viral on the social media, with many accusing the clothing retailer of being racist.

Many black celebrities like The Weeknd, Diddy and LeBron James slammed H&M for the seemingly tone-deaf campaign, forcing H&M to apologize and retract the photograph. Terry Mango, however, denied any racist undertones, claiming it was an innocent outfit. By her own admission, she did not even recall her son posing in the outfit in question until the image surfaced online, causing the uproar.

"I respect other people's opinion on the issue. I know racism exists, but does the shirt to me speak racism? No it doesn't," Mango told BBC.

Is there something wrong with these pictures? People do not not be fools! Everything is not a rascist attack against you. pic.twitter.com/vVsAy5C4wg

​Mango claimed to have been a victim of racism before and admitted it was a huge problem. However, she also added that other black people have attacked her for not agreeing that the advertisement was offensive.

"It's like I am a sell out to them, I am an embarrassment to the black and African-American people. It's like I sold my son for money," Mango said.

Why do you want to interview me? We live in a world where so many tragedies and useful information abound, and your journalistic pursuits involve a boy wearing a hoodie? https://t.co/pqsCVHJnj6

​By Liam's parents own admission, the boy loves modeling and was contracted to the H&M campaign through a modeling agency in Stockholm. Mango said young Liam was oblivious to the racism controversy surrounding the image and believed he had become a superstar following his good job as a model.

The mother of the black boy from the H&M picture has spoken and she doesn't see the big deal about the sweater. Do you agree with her? If not, does that make her a bad parent? Leave your thoughts.. #SLDH #StarlifeDancehall #DoBetter #Culture #Youshouldknowbetter #History pic.twitter.com/tNq8Io2bLA

Despite apologies from H&M and pleas from Terry Mango to "get over it," some refused to accept it. On Saturday, violent protesters in South Africa stormed H&M stores in Johannesburg. In the protests organized by the radical Economic Freedom Fighters' party, six stores were trashed, prompting the company to temporarily close all stores in order to keep staff and shoppers safe.

Diddy offered this young H&M model a $1 million contract after he was featured in a 'racist' photo pic.twitter.com/DwlO8IfiC6