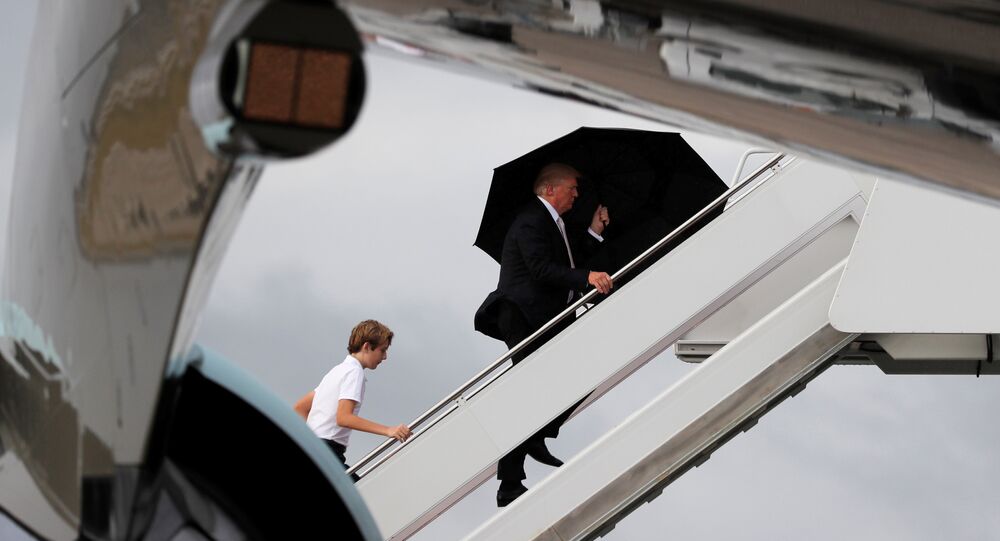 Some Knight You Are! Mr President Hogs Umbrella While Rain Soaks Family

The media have been widely discussing Donald Trump’s recent gesture, where he held a big black umbrella over his own head in the rain as though completely forgetting about Melania and 11-year-old Barron trailing right behind.

The family were their way back from their Mar-a-Lago resort to the White House after a long holiday weekend when Trump exposed his lack of gentlemanly manners.

Once he safely got inside his Air Force One plane, he shook the brolly off making sure he kept his famously yellowish bouffant dry.

The news has immediately set Twitter alight, with netizens vigorously commenting on Trump’s "knightly" gesture, causing Melania and Barron to fend for themselves:

What a gent! Donald Trump makes sure umbrella protects his famous locks but Melania and Barron are left to fend for themselves — https://t.co/e31zYpbC8T

What a rude, self-absorbed asswipe. https://t.co/uyWYgujDHF

Trump's alleged racism-charged comments were not overlooked either, with some users in all seriousness viewing the umbrella incident as a "white supremacy act":

Valiant Donald Trump keeps umbrella to himself while Melania and Barron are rained on https://t.co/yoLcxiRSah HOW DID THIS LOW LIFE PO💩 get in the WH? This is WHITE SUPREMACY TRASH! Republicans are defending this WS💩 w their LIFE

Some ironically remarked why on Earth the family had only umbrella to share:

@realDonaldTrump #trump most powerful nation in the world and you have only one umbrella?

Some pro-Trumpers also engaged in the discussion, choosing to draw parallels with "wimpy" Obama:

I look at this photo & I see President Trump holding his own umbrella, unlike Obama who would have had several folks holding his umbrella for him.
As for apologies by President Trump I fail to see proof that our President actually said anything wrong other than salty language.

Unlike wimpy Barack Hussein, Trump always carry his own umbrella