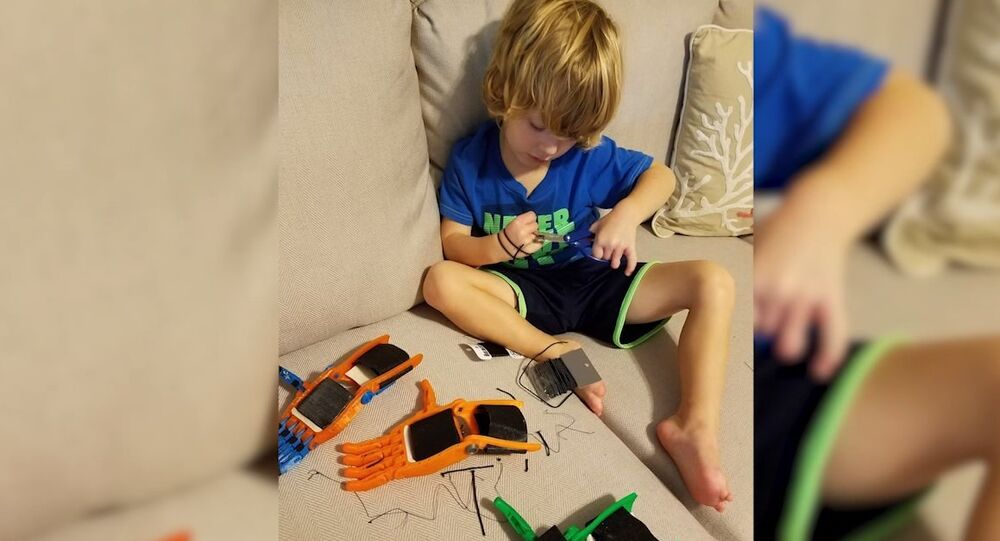 This story of an extraordinarily humane little boy going on a grown-up mission to help kids his age who are in need is sure to blow your mind.

This is Cameron Haight, an adorable five-year-old from the US state of North Carolina, who was born with a severe genetic impairment that fused his fingers together. However this hasn't stopped him from becoming the youngest sculptor in the world to have taken up the challenge of designing a 3D-printed-hand for disabled kids.

Having undergone as many as 15 operations to make his hands and fingers functional, Cameron knows firsthand how troublesome and painful it is to operate with webbing or half amputated fingers.

Assistive 3D hands, however, arrived right in time, prompting the youngster to reflect on the greater problem and embark on an ambitious project to help other impaired kids. Thanks to his 3D printed hands, Cameron views his deformity most positively, calling it his 'cool robot hand' and encouraging others to use them too.

Assisted by his mum, he has designed and created prosthetic hands for kids with limb impairments, even supplying them with a special holder for nerf guns, kitchen utensils and pencils – for now, a total of 44 devices to spread around the US, Canada and Japan.

"He's only five-years-old now, but he's really good at it, he goes on the printer, finds the files, sizes, scales and prints them, then we assemble them — it's really fun to watch him in action," The Daily Mail quoted his mother Sarah as saying.

"He's the youngest one 3D-printing hands for all the others that we've heard of; he loves putting them together as well […] Knowing my little boy is now making hands that are changing other people's lives, just as his hand has changed his life, is just an incredible thing to be a part of," Sarah noted most inspiringly.

Cameron first hit the headlines a year ago, when he just started his 3D hands project he himself called the Imagine Tool 5000. Shortly after, the innovative US MORE Foundation launched a new program that would use 3D printing technology to create low-cost, high-quality prosthetic hands for children in need so as to give them the ability to grip, hold and toss objects.

Getting Ready to Surf the Roads? Talented Raccoon Learns to Ride Scooter