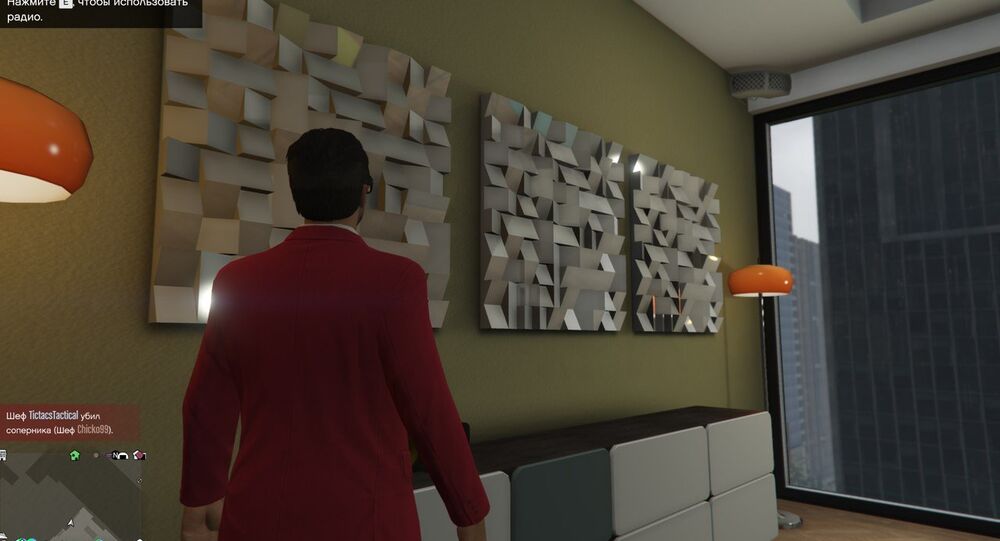 Blown away by an intricate installation he saw in the fifth game of the Grand Theft Auto series, one man decided to make a real one for himself.

Some creative people don't need to seek inspiration — their muse will find them anywhere, no matter what they are doing. This is exactly what recently happened to resident of Volgograd Ivan Belkin as he was playing GTA V.

"It was not only the plot that stunned me, but also the elaboration of the game's virtual world. For many hours I just traveled around Blaine County [fictional rural area of the State of San Andreas featured in the game], looking at architecture and interiors," Belkin said, sharing his thoughts on Russian social network vk.com.

© Photo : Ivan Belkin
Ivan Belkin and an art object he created, being inspired by Grand Theft Auto V.
He was especially impressed with one peculiar art object on the wall of a virtual apartment. "The sun was playing on its edges, the geometric figure was fascinating," Belkin admitted.

That's when the man came up with the idea to try his hand at creating the same panel for his real room. He designed a model in a graphics editor program, made several corrections and then assembled the object from foamcore and metalized paper; the entire process took him about 15-16 hours.

© Photo : Ivan Belkin
Ivan Belkin working on an art object, being inspired by Grand Theft Auto V.
According to Ivan, he has been fond of assembling models from designer paper for about a year. After the enthusiast shared pictures of his creations on local social media, his story quickly went viral. Belkin has even received an offer to make a similar art object to order; however, the man declined it, since he prefers for it to remain an unpaid hobby.
...
Reddit
Google+
Blogger
Pinterest
StumbleUpon
Telegram
WhatsApp
131

A Selfie in Foam: Coffee Art Reaches Peak in This Beijing Café