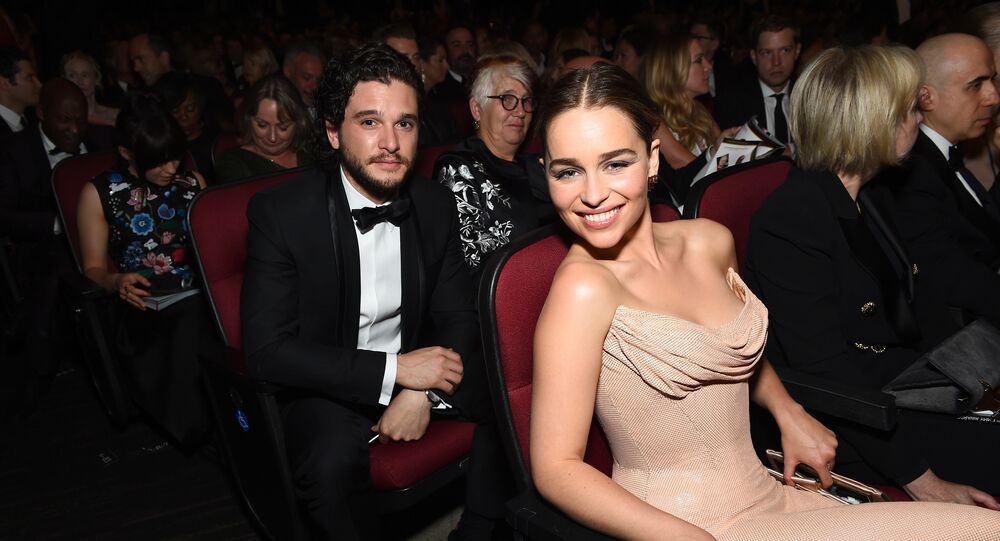 Winter had certainly arrived on Friday night, as Game of Thrones star Kit Harington was standing outside a New York bar in nearly freezing weather with no coat on. He was arguing with a bouncer who had just booted him out of the venue. After 24 hours he joined his co-star Emilia Clarke at Sean Penn's charity bash in Hollywood.

Kit Harington was apparently in better spirits when he appeared with his co-star Emilia Clarke on Saturday night at the 7th Annual Sean Penn & Friends HAITI RISING gala party in Hollywood.

The GOT colleagues made a perfect color match as Clarke was wearing a gorgeous red maxi skirt and Harington chose to put on a black ensemble comprising a smart suit and a fitted black sweater with matching velour shoes, just a day after the drunk-fueled row over the pool table.

Harington had to be physically "removed" from NYC's Barfly on Friday night, after he came back there having been verbally requested to leave.

In a video, obtained by TMZ, 31 year-old Harington, who rose to fame as much-loved Jon Snow in the wildly popular HBO fantasy production "Game of Thrones," was being held back by the bar security staffers during a heated alcohol-fueled debate.

He reportedly hovered over the pool table and grabbed the cues. He addressed some customers who presumably were attempting to play pool, before being escorted to the exit.

The Internet community seems to be divided over whether this is yet another arrogant escapade by a celebrity or just an innocent holiday-maker’s wrongdoing:

"Sorry this is too funny. He is not asking for a fight he seems to just want a pool cue! Most of us get drunk and say and do silly things, men especially get lairy. Give the guy a break! It’s not like he was punching the crap out of someone for no reason,” wrote one commentator on the Daily Mail website.

Others pondered on the arrogance of the boozed actor not to behave himself:

"Just another arrogant, self-obsessed luvvie who believes the world revolves around him. @ssholes like him deserve only one thing… a hefty smack in the mouth!" –another Internet user wrote.

READ MORE: 'Now My Wait Begins': No Game of Thrones Until 2019, Netizens Nuts Over News

Harington is reportedly one of the highest paid actors on television, making $500,000 for an episode, according to a Variety report published last summer.

The final, story-ending six-episode season of award-winning "Game of Thrones" is due to come out in 2019.