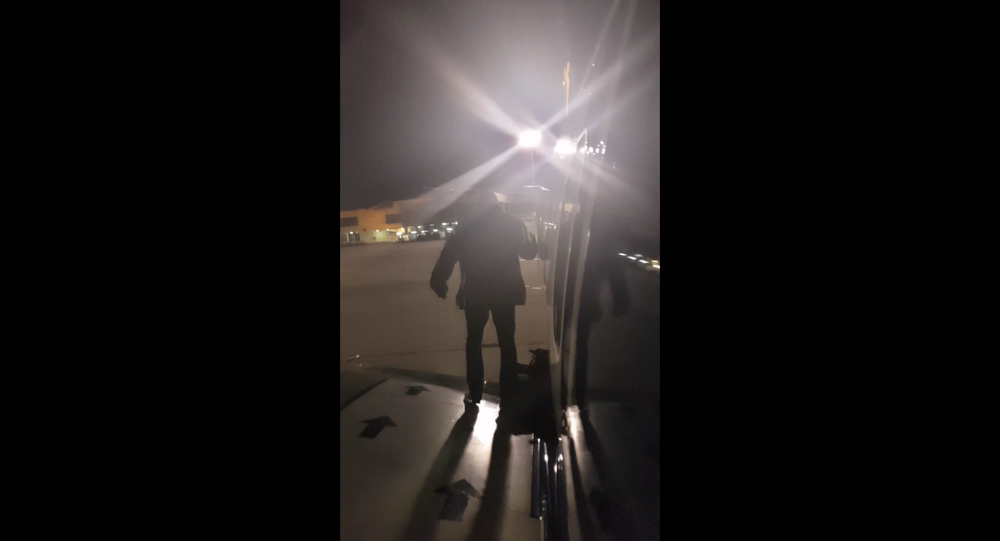 Frustrated with the repeated delays on his Ryanair flight to Malaga, Spain, Monday, a 57-year-old Polish national chose to take his leave of the situation through the plane's emergency exit instead of waiting for flight attendants to begin disembarking procedures.

The first of the delays began when the traveler at London's Stansted airport, saw his flight to Malaga pushed back an hour. The second delay came after the flight finally made it to Spain — passengers were kept on board for an estimated 30 minutes before being let off the plane.

​Filmed by Fernando del Valle Villalobos, a fellow passenger, the video shows the frustrated flyer walking on the plane's wing and seemingly contemplating whether to jump off or stay put. He ultimately chose to sit on the edge of the wing.

"This man decided he wasn't going to wait any longer," del Valle captioned the video. "He activated the emergency door and left, saying: ‘I'm going via the wing.'''

Speaking to the Daily Mail, del Valle told the outlet that the man "sat on the wing for quite a while until the crew managed to get him back inside."

Once officials were able to get ahold of the passenger, it was a done deal. He was soon arrested by local police.

In response to the incident, a spokesperson for Ryanair labelled the ordeal an "airport security breach."

"Malaga airport police immediately arrested the passenger in question and since this was a breach of Spanish safety and security regulations, it is being dealt with by the Spanish authorities," the statement added.

Another passenger, who was sitting next to the unidentified escapee, told reporters that the Polish man was motivated to open the emergency hatch because he was suffering from asthma and was having difficulties breathing.

"I don't blame him. If a plane is at standstill for over 30 minutes and you have no freedom and a health condition, you are bound to do something," Mistry added.

This, as it turns out, is not the first eyebrow-raising incident that the airliner has had to deal with, according to Channel News Asia. In 2016, a passenger in Madrid jumped from a disconnected bridge and sprinted across the tarmac to catch a Ryanair flight. The passenger reportedly mistook the departing flight for one he was scheduled to be on.