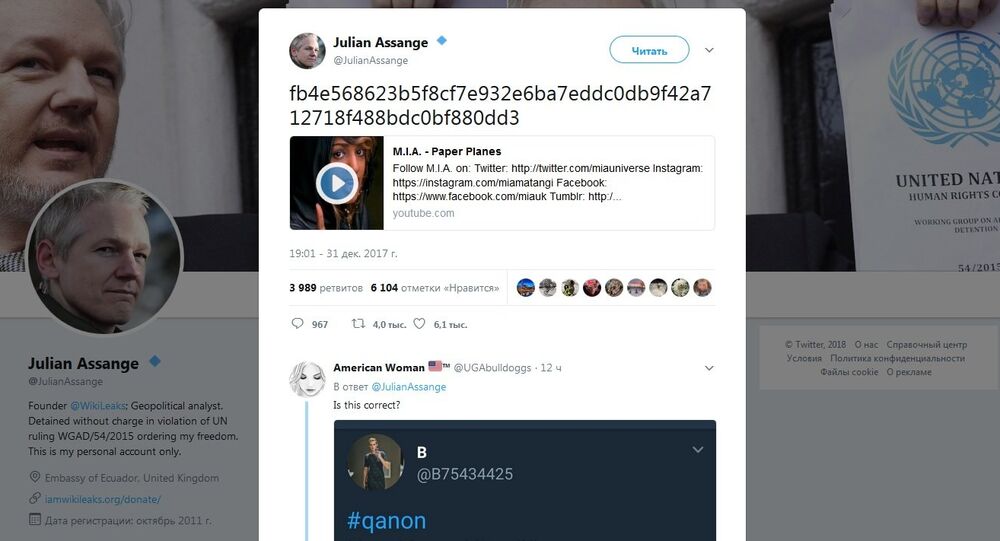 An odd, cryptic tweet by WikiLeaks founder Julian Assange featuring some sort of code and a link to the video of a 2008 rap song has sent Twitter into speculation mode over its meaning.

The tweet, which remains Assange's last entry as of 5pm GMT, includes a 60 character code composed of letters and digits, along with a link to M.I.A.'s Paper Planes, a song featuring the chorus "All I wanna do is (gunshot, gunshot, gunshot, gunshot) and (click, ka-ching) and take your money" and the lines "If you catch me at the border I got visas in my name" and "I've got more records than the KGB, So, uh, no funny business."

The message has led to a flurry of speculation over what exactly Assange was trying to say. Was it an encryption key indicating that a fresh batch of WikiLeaks files was on the way? Or a code for a 'dead man's switch' triggered to release its cache of 'life insurance' files in case the freedom of information activist was assassinated?

It signals another Wikileaks drop is imminent.

Is that a….dead man's switch?

Other users voiced hopes that the post was an indication that the Trump administration had pardoned Assange. Others still said that the artist from the accompanying rap video was an important piece of the puzzle.

M.I.A. = Missing in Action, maybe meaning he's not where we think he's at. Rumor has it he's been trying to make a deal with Trump for information. Maybe the deal has been made. I hope so, the man deserves a pardon.

"Paper planes" = Julian extracted/ safe?
"Take your money" = Frozen assets?
"More records than the KGB" = He has the info?

Others didn't attempt to guess the post's meaning, and turned to posting memes indicating their bewilderment, or simply wished Assange all the best.

What could this mean….?

I hope your freedom comes this New Year, @JulianAssange. You deserve the best life has to offer! <3#FreeAssange #SafePassageForAssange #JusticeForJulian pic.twitter.com/BN3Nb0HPPr

© AP Photo / Kirsty Wigglesworth
Julian Assange's Twitter Account Again Available Hours After Being Deleted
WikiLeaks has been known to use mysterious 60+ character codes in the past, including a series of odd three 64 character 'pre-commitment' messages in October 2016. NSA whistleblower Edward Snowden has also used similar code.

Assange has been living in the Ecuadorian Embassy in London since 2012, for fear of being extradited to Sweden on trumped up sexual assault charges. In 2015, the UN Working Group on Arbitrary Detention ruled that Assange's detention was arbitrary, but the UK and Swedish governments have refused to recognize the legitimacy of the UN's conclusions. Launched in 2006, WikiLeaks has released millions of classified documents related to espionage, war crimes, torture and other human rights violations. WikiLeaks' release of tens of thousands of files on Democratic presidential candidate Hillary Clinton is thought to have played a role in her defeat in the 2016 US presidential campaign.