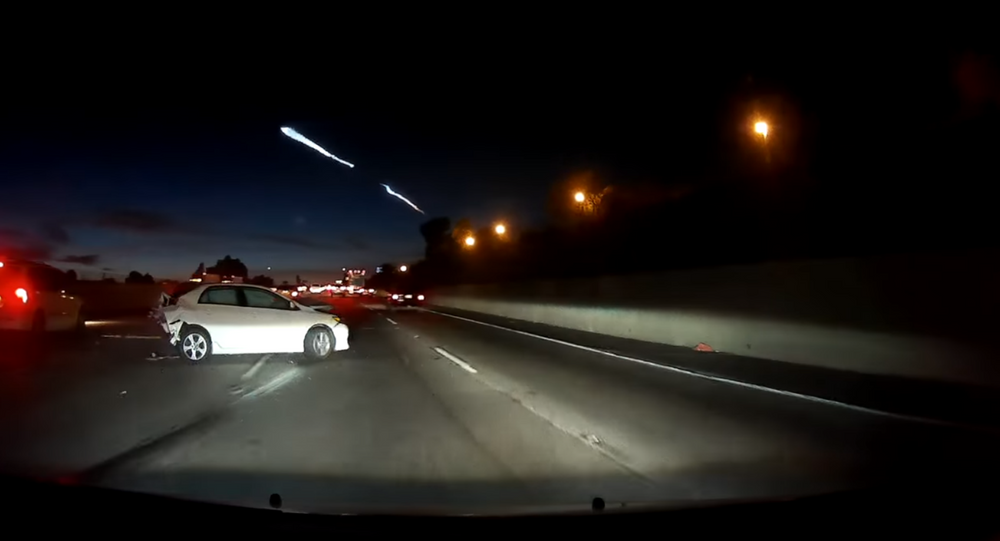 Soaring the skies above central California, SpaceX's Falcon 9 rocket not only garnered thousands of hits on social media - it also caused actual hits between cars.

A few short minutes after Falcon 9 was launched — Friday at approximately 5:27 p.m. — from Vandenberg Air Force Base, a three-car collision was recorded by a driver's dashcam.

​The video, filmed along Cali's Interstate 10 in Banning, first records a conversation between a man and woman discussing what the mysterious shape could be. Then the accident happens: just as a child chimes in to say that a rocket was making the smoke, a minivan pummels into the trunk of a white Toyota Corolla, which is then pushed into a Toyota RAV 4 SUV, Business Insider reported.

"Oh sh*t, oh sh*t," the man is heard saying in the video. "This guy is not paying attention… damn… but look at [the rocket], though!"

To which the woman in the car simply yells out, "Can you please pay attention?"

As speculation spread like wildfire, with many calling the phenomenon evidence of a UFO sighting, even Elon Musk, SpaceX's CEO, got in on the chatter.

​According to SF Gate, Friday's launch, which carried 10 satellites into low-Earth orbit, was the 18th and final SpaceX launch of the year.