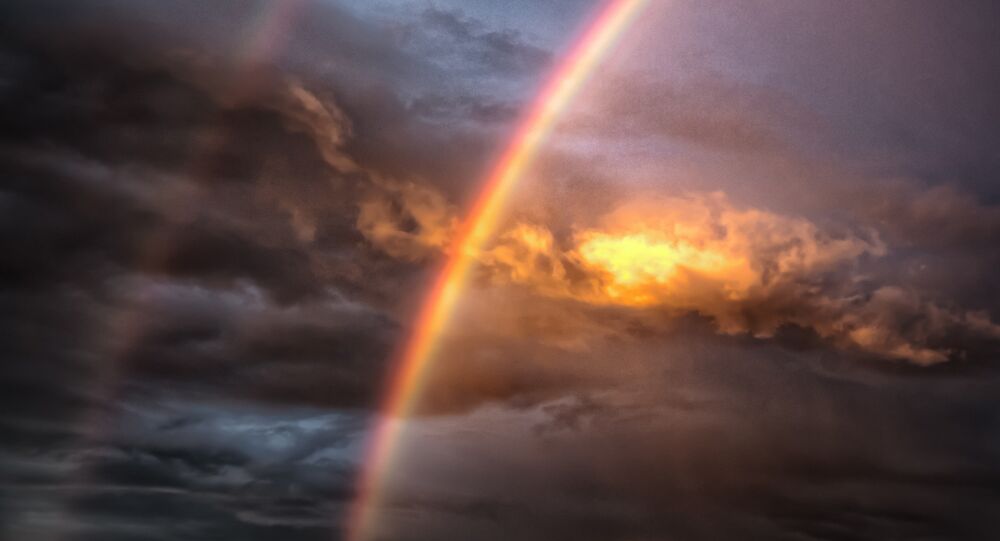 While not infrequent in summertime, rainbows are an exceptional sight during the winter. Locals in parts of Norway have had the rare chance to witness a full-circle rainbow stretching over a snow-covered landscape.

The majestic display of light was admired by lucky Norwegians living in parts of Hedmark and Oppland, as well as parts of Oslo county on Tuesday. In Trysilfjellet, people were skiing with a giant rainbow above them.

"A winter rainbow is something that does not happen very often. But sometimes, under lucky circumstances it does happen," meteorologist John Smits told Norwegian national broadcaster NRK.

According to Smits, a seldom combination of coinciding factors must occur for this phenomenon to occur. Since visible raindrops are an imperative requirement, rainbows almost never occur in wintertime, when the temperature mostly lies below zero in Scandinavia.

"First off, you have to have the sun visible in order to see the rainbow, and the sun has to be behind you. Today, it was mostly clear in the east and the sun was about to rise over the horizon. At the same time, there were clouds with a small rainfall from the west, and then a rainbow appeared amid a rainfall," Smits explained, attributing the sight to the freezing rain.

According to Smits, what started as snow in the clouds was confronted with hot air as it approached the ground. This caused snowflakes to melt into rain, which eventually became frozen again as they fell onto the ground.

The Meteorological Institute was bombarded with pictures taken by happy Norwegians delighted by the rare display. The inhabitants of Elverum who got to witness a double full-circle rainbow were particularly lucky.

"This is pretty special. Pictures should be taken and shared with people," John Smits said.

A rainbow is a meteorological phenomenon in the form of a multicolored circular arc caused by reflection, refraction and dispersion of light in water droplets resulting in a spectrum of light appearing in the sky. Rainbows caused by sunlight always appear in the section of the sky directly opposite the sun.

Rainbows occur frequently in folklore. In Norse mythology, the rainbow bridge Bifröst connects the world of men, Midgard, with the realm of the gods Asgard and is guarded by a god named Heimdallr.