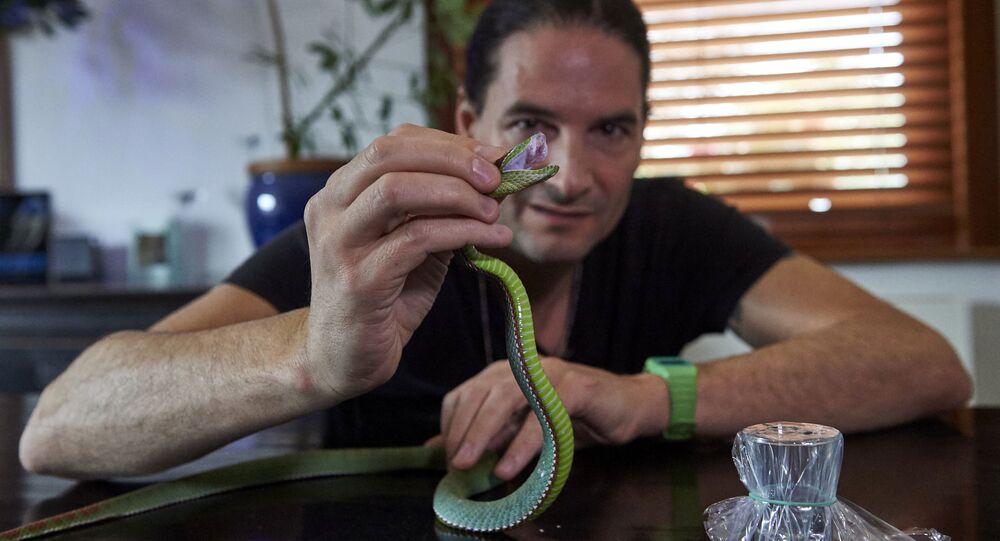 A team of Danish researchers have completed an artificial library comprised of copies of antibodies made by the rock singer's immune system in response to his injections of snake venom.

For 25 years Steve Ludwin has been injecting himself with venom from some of the most venomous snakes in the world. While he at first diluted extremely low doses of venom with water, he has since increased the dosage gradually. So-far, he has a repertoire of more than 35 species of snake, the website ScienceNordic reports.

While there is currently no scientific evidence to actually support his cliam, Ludwin believes that his immune system is strengthened by the venom injections, and that it helps him stay young.

© CC0 / Pixabay
Russian Researchers Learn to Control Nanoparticles in Human Body
This has given scientists a unique opportunity to study how the immune system responds to snake venom. The Nordic website goes on to write that the library compiled by the Danish researchers is now being used to screen for antibodies that have the ability to neutralize particular toxins found in venom and that might be used in developing anti-venoms.

"With Steve's help we now have a unique, tailor-made library, that potentially contains neutralising human antibodies against snake toxins, which could eventually be used to treat snakebite victims," Brian Lohse, associate professor in chemistry and molecular biology at the University of Copenhagen and leader of the research project, told ScienceNordic.

While there are already anti-venoms in existence for a multitude of venoms, snake bites remain a big problem for many countries, killing upwards of 150,000 people annually and leaving 400,000 in need of amputation, according to ScienceNordic.

The researchers flew Ludwin to Copenhagen, and while they were able to take samples of his blood, these did not include sufficient amounts of B-cells. Instead, they had to extract some of his bone marrow to get the sufficiently many B-cells to isolate them.

"Steve had to think about it for a couple of days, but Steve's a tough nail, and said yes. That was what it took to finally get over the hurdle. We were finally able to extract enough of the B-cells and isolate his DNA and RNA," says Lohse.

The Danish scientists now have the funding to start screening the library for binding antibodies that can be used to combat snake venom, with the first step being to locate the specific antibodies that fought off the most venomous toxin proteins in the venoms Ludwin injected himself with.

The hope is that in the future, the scientists will be able to develop antibodies inside animal cells, which could help them turn the neutralizing antibodies into an antidote, which can be used for treatment and produced on an industrial scale, writes ScienceNordic.

However, Lohse is keen to point out that this should not be taken as an endorsement of Ludwin's venom-injecting hobby.

"The fact that he does this and has survived so long is almost a miracle. You might not only get liver and bone damage, you could die. The University of Copenhagen absolutely does not encourage anyone to do what Steve has done. It is important for us to point out that Steve started this long before we came into the picture, and hence we could not have encouraged Steve to do what he does," Lohse pointed out.