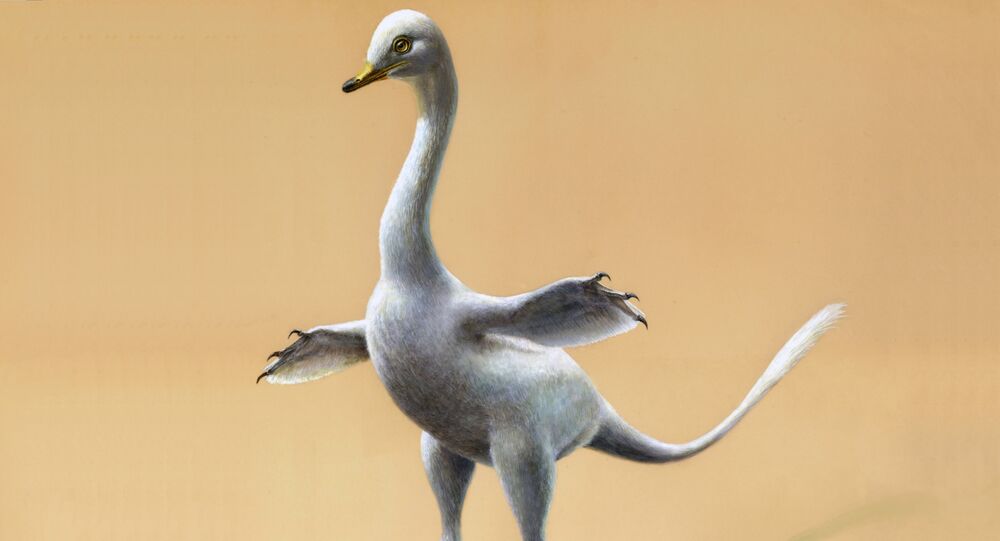 A newly discovered dinosaur has made headlines, mostly due to its literally nightmarish appearance, as it turns out to have a bill like a duck and teeth like a croc, coupled with a swanlike neck and double claws – on its hands and feet.

This tiny, turkey-sized dinosaur, dubbed "Halszkaraptor escuilliei" after the late Polish paleontologist Halszka Osmolska, roamed more than 75 million years ago in what is currently Mongolia, a study in the journal Nature suggested.

"It’s such a peculiar animal," said Dennis Voeten, a paleontology researcher at Palacky University in the Czech Republic. "It combines different parts we knew from other groups into this one small animal."

© AP Photo / Pierre Jayet
This photo provided by the European Synchrotron Radiation Facility shows a Halszkaraptor escuilliei fossil at the ESRF facility in Grenoble, France
© REUTERS / Courtesy Lukas Panzarin
A dinosaur, named Halszkaraptor escuilliei, a turkey-sized, bird-like dinosaur that boasted a swan's neck, arms resembling flippers, long legs and a mouth full of needle-like teeth staked out a unique amphibious lifestyle in rivers and lakes about 75 million years ago in Mongolia is seen in this artist's reconstruction image released on December 5, 2017

Paleontologist Kristi Curry Rogers of Macalester College in St. Paul, Minnesota, who didn’t participate in the study, called it "a pretty crazy chimera: a swan neck and dinosaur body, but with a mouthful of tiny teeth and hands and feet that look like they might be good for swimming."

Judging by its physiological makeup, the species could run and hunt on the ground and fish in fresh water, its multiple teeth perhaps petrifying away the prehistoric fish, investigators came to believe.