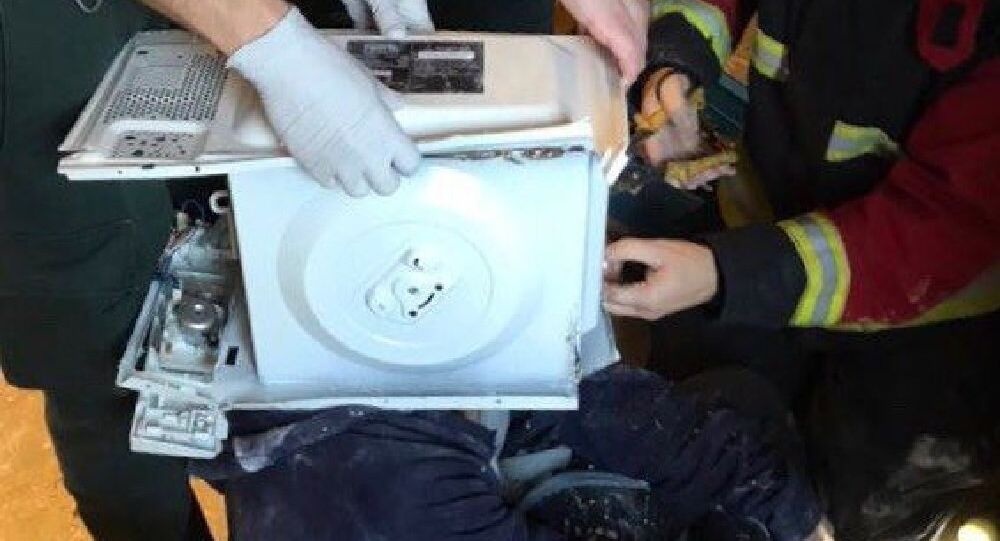 Dumb and Dumber: British YouTuber Cements His Head in a Microwave (VIDEO)

A YouTube prank gone awry resulted in a young man ending with his head stuck in a microwave full of wet cement, leaving the local fire department which leapt to his rescue "seriously unimpressed."

Jimmy Swinger, a 22-year old Briton and one of the authors of the TGFbro YouTube channel managed to land himself in a bizarre predicament after he deliberately stuck his head into a microwave oven filled with wet cement.

The YouTuber and his friends apparently intended to use the microwave as a mold, but then something went wrong and Swinger found himself unable to extricate his head from the cement. Fortunately, his friends managed to slip Swinger an air tube to enable him to breathe, allowing the hapless prankster to survive until the emergency services arrived.

Shaun Dakin, West Midlands Fire Service Watch Commander and the officer in charge of a response crew that rushed to Swinger’s aid, pointed out that “taking the microwave apart was tricky, because a lot of it was welded,” adding that his team had to call their technical rescue colleagues, according to Metro.

It took the five firemen about an hour to rescue the hapless YouTuber, leaving the fire service "seriously unimpressed."

We're seriously unimpressed 😡.
Five of our firefighters were tied up for an hour this afternoon, freeing a YouTube pranker whose head had been 'cemented' inside a microwave oven. Read more: https://t.co/6bZReGuKQX (Photos © West Midlands Fire Service) pic.twitter.com/2ch2UhszeH

​Swinger’s ordeal left Twitter audience baffled and amused, with people cracking jokes and wondering how the prankster came up with this idea in the first place.

1. Why did you cement your head in a microwave?

2. How did you call 999 with your head cemented in a microwave?

3. Why did you cement your head in a microwave?

It’s best to cement your head into a washing machine drum. Using a microwave is just silly.

​At least one person took offense with the West Midlands Fire Service’s tweet, blasting them for allegedly being unimpressed by "responding to a call where someone’s life is in danger."

Unimpressed? For what, saving a mans life? surely its your job to respond to a call where someones life is in danger. How can you be unimpressed.

If you're unimpressed with having to save a man while doing your job then I dont think you've chosen the right career.

​Others however pointed out that Swinger basically forced the responders to devote precious time and resources to rescue him from a rather stupid, albeit dangerous, predicament which could’ve been easily avoided in the first place.

A complete waste of resources devoted to this mess. Sometimes we need to remember Darwin! If you’re stupid enough to cement your head in a microwave, at least be smart enough to have a back up plan that does not revolve around emergency services. https://t.co/lHsiy1W8Rm

THEY COULD HAVE BEEN HELPING SOMEONE WHO DIDN’T CEMENT A MICROWAVE TO THEIR HEAD FOR VIEWS. https://t.co/PrpJQBo2uC

An Ass in a Hat! Diver Captures Least Expected Thing to Stumble Upon in the Sea