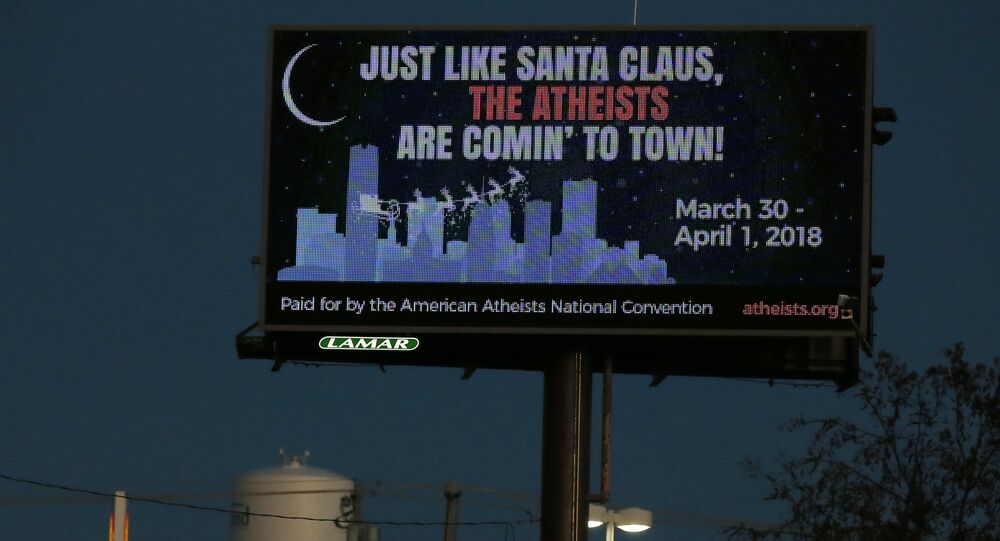 Setting off a wave of pearl-clutching in the US, the American Atheists group has set up shop in New Mexico and Texas with a billboard that says, "Just Skip Church, It's All Fake News."

Posted in Albuquerque and Dallas-Fort Worth, the billboards, which will only be up for the month of December, also include an illustration of Christianity's famous manger scene and a "Happy Holidays from American Atheists" message.

​"Everyone knows that the stories we're told in church aren't the truth," David Silverman, president of American Atheists, said in a statement. "People ignore that fact because they enjoy the community, the friendship and the traditions that go along with religion. But we're here to tell them that churches don't have a monopoly on any of that."

"Spend time with your friends and family, give gifts, do charitable work, and enjoy the season. You can do all of that while also celebrating the truth," Silverman added.

As you can imagine, people were not exactly thrilled with the message.

"I think it's terrible because Christmas is almost here for one thing and that's not the way I wish to celebrate the holidays," Connie Lindsay, an upset Albuquerque local, told KRQE.

Unlike Lindsay, fellow New Mexican Greg Aguilar believes that "inclusion is important," though he was unsure whether or not the billboard was really "necessary."

YouTube/Caters Clips
Trust Issues: Husky Anxious Over Christmas Decor
"It's just not in my belief system," Aguilar told the outlet.

And yet, despite the misgivings residents in the area may have, Nick Fish, the national program director of American Atheists, says that the boards are really just "a great way for us to, in a kind of lighthearted way, start those conversations and get people talking."

The group also has boards posted in Oklahoma's Tulsa and Oklahoma City to promote the American Atheists 2018 National Convention in March. The second design shows the Oklahoma City skyline with the words: "Just like Santa Claus, the Atheists are coming to town!"

No stranger to the billboard game or to aping US President Donald Trump's slogans, the organization also put up boards in 2016 that read "Make Christmas Great Again… Skip Church."