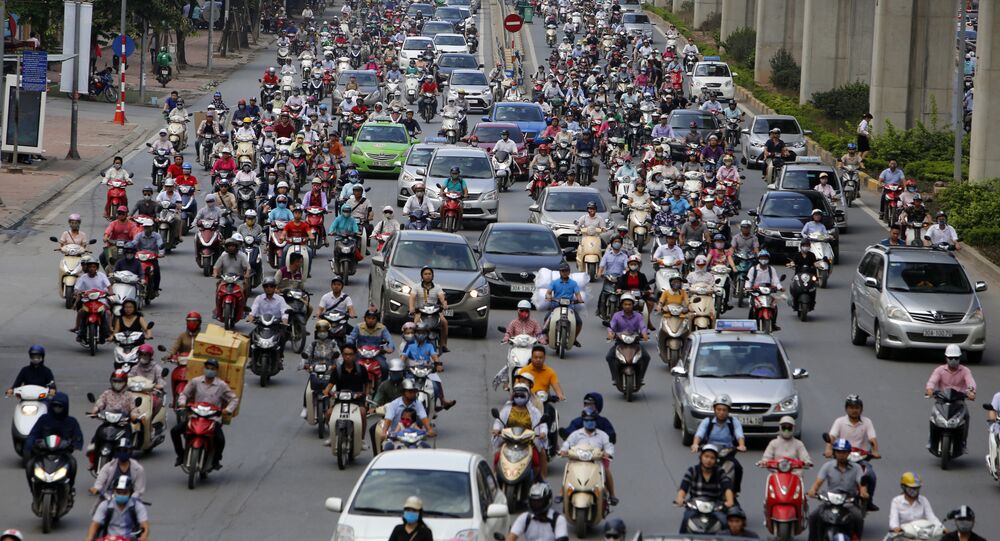 Away From Capitalism: Soviet Bikes Take Hanoi by Storm

The USSR-made motorcycles are the latest fad in Vietnam, as the country's youth turns away from flashy scooters towards sturdy Soviet machines

Speaking to CNN, tour guide Steve Christensen pointed to the growing popularity of the Soviet-built Minsk motorcycles amongst the Vietnamese youth, who are spearheading the bike's return to the country's sport and cultural life.

"In 2010 these bikes started to make a comeback among young people, and all of a sudden there were a lot more events and races."

© Sputnik / Fred Grinberg
Soviet Youth as You've Never Seen Before
21
Christensen noted that the Vietnamese teenagers and young adults prefer the retro bikes to the modern scooters for their vintage style and anti-consumerist message.

"Some young people are turning their backs on overt displays of consumerism in Vietnam and instead embracing this vintage motorbike style and their DIY spirit — embodied in the Minsk."

The Minsk bikes, aka M1A or M1NSK, first entered Vietnam in the late 1960s, quickly becoming the country's most popular motorbike for the next quarter of a century.

Co-founder of Hanoi Backstreet Tours Tommy Nguyen noted that close connections between the USSR and Vietnam enabled the flow of the much-sought bikes into the country.

"Many of the Minsks were brought to Vietnam in the late 80s by Vietnamese people working in the former Soviet Union," Nguyen told CNN.

"They would buy bikes really cheap there and sell them in Vietnam for a profit. There were not many bikes available then and they could get them in the country for little to no tax compared to a Japanese bike at the time."

Every time I see the Top Gear Vietnam special I want to fly to Vietnam and buy a Minsk bike and follow the same path they did.

Although the Minsk faced some competition from its East German counterpart, the Simson, it "was more favorable as it is much stronger and bigger."

Despite the collapse of the Soviet Union and the introduction of modern Western and Japanese scooters, the Minsk remained a much-valued item for the Vietnamese farmers due to its reliability and strong performance.

© Sputnik
Need for Speed, USSR-Style: Seven Legendary Cars Made in Soviet Union
"Using a scooter like a Honda Dream was not an option for farming communities. The Minsk were strong and could carry heavy loads," says Christensen.

In the late 1990s, the Soviet bike returned to its glory days with the first Minsk Club established in Hanoi in 1998.

More recently it reasserted its cult status amongst the Vietnamese youth, who organize numerous sports competitions and express their rebellious anti-consumerist ideals by choosing the rough, yet functional, Soviet bikes instead of their glamorous Western counterparts.

"Over the past few years, more and more young Vietnamese have taken up the Minsk out of a sense of adventure," Christensen stated.

"They are turning away from the status symbol of a flashy city scooter and, instead, exploring their country and roughing it in the old Soviet-era style."

"These kids really love their bikes and the sense of freedom that it brings," he added.

Similarly, Nguyen noted that the switch towards the no-nonsense Soviet machines signify the rejection of the Western capitalist system and its consumerist paradigm, and the return towards more traditional values.

"Minsk are strong and manly. They're rude in the maze of back streets of Hanoi."

"It is a trip down our memory lane, when Vietnamese people to think about the era of collectivism," Nguyen concluded.