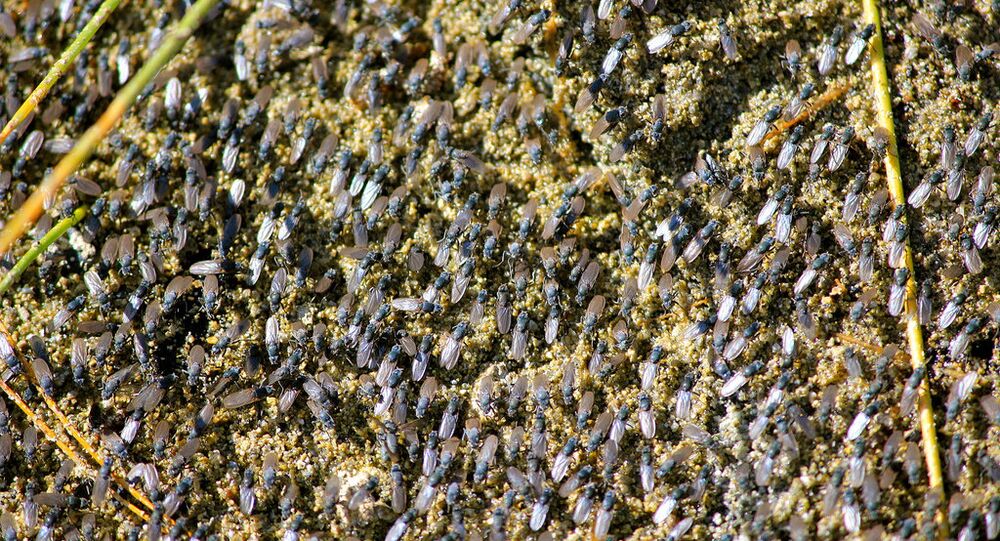 The survival secrets of the exceptional hairy fly endemic only to the salty and highly alkaline waters of Mono Lake in California have been revealed. The body hair of the fly, whose trademark appearance has earned it the alias "hipster," helps it create an air bubble functioning like an external lung, which allows it to dive safely.

The hairy alkali fly (Ephydra hians) has long fascinated researchers with both its out-of-the-ordinary bearded appearance and unorthodox lifestyle in which it dives into the toxic waters of Lake Mono to feed and lay eggs.

The trendy hirsute appearance, however, was found to be key to its survival under extreme conditions and not just a fashion fad. The hair on the fly's body helps the insect develop a waxy coating, which allows it to become encapsulated in an air bubble, which, in turn, repels water and facilitates the diving process. After having had its fill, the fly floats back to the surface when the air bubble bursts.

"The flies in Mono Lake are getting more hairy, like hipsters," biologist Michael Dickinson of the California Institute of Technology told Swedish national broadcaster SVT.

Mono Lake's alkali flies are making headlines! These unique, hairy flies can trap a bubble of air around themselves when they walk under water so they can breathe while eating algae off of tufa towers. Photo by @FlorisBreugel. https://t.co/vDe7mAPBk5 pic.twitter.com/oDfmneYsQP

​Mono Lake is not like any other lake. Due to its specific chemical composition it is often perceived as "wetter." Nevertheless, the fearless fly manages to keep dry under water, which may be deadly for its insect peers. During the diving process, the fly must exert forces 18 times its body weight.

"To keep dry when diving to the bottom, the flies have developed superhydrophobic properties which make them water-resistant," Michael Dickinson explained.

​The researchers' theory is that the fly's nonconformist behavior was spurred by the pursuit of food. Mono Lake has no fish, which means that there are no major enemies to the bearded diver. The only known creatures that inhabit the lake year-round are photosynthetic algae and a species of tiny shrimp.

"To take care of all the free food in the form of algae available, they had to develop special properties to keep them dry underwater. Had there been fish there, it would have been a suicide mission to dive in this way," Michael Dickinson explained.

Youtube / Sputnik
Bugged Out: Insect the Size of a Human Arm
According to Dickinson, the scuba-diving fly's unique characteristics might inspire engineers who develop materials with repellent surfaces.

​The unique ways of the Ephydra hians, also known as the brine fly, were noted by writer Mark Twain.

"You can hold them under water as long as you please — they do not mind it — they are only proud of it. When you let them go, they pop up to the surface as dry as a patent office report, and walk off as unconcernedly as if they had been educated especially with a view to affording instructive entertainment to man in that particular way," Mark Twain wrote in his autobiographic work "Roughing It."

"This fly survives by encasing itself in a bubble" https://t.co/iBy1We8MiC pic.twitter.com/9yudg6SA0v

Mono Lake is currently 6,381.4 feet above sea level, an amazing 4.2 feet higher than a year ago! pic.twitter.com/tRW4Wx4G2y

Video of 'Alien' Insect Will Leave You Sleepless for Days