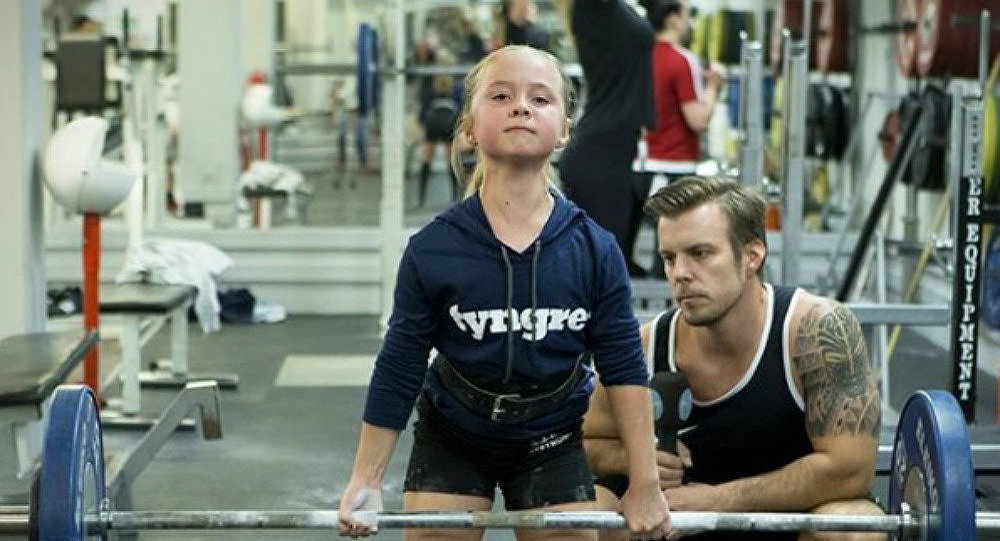 A ten-year-old Swedish girl has stunned her compatriots with her unparalleled prowess in weightlifting and is poised to become the world's strongest lady, punching well above her weight.

Indra Lundqvist can deadlift 65 kilograms. This is no mean feat for a girl and all the more astonishing given that Indra is only 10 years old.

"It was quite heavy, but I believe can handle 70 kg with sumo technique [which uses a broader foot position]," the young powerlifter told Swedish national broadcaster SVT.

In the absence of official statistics, her father Daniel Lundqvist was unable to find out how Indra stacks up with her, peers, but for the girl in question, the goal is clear.

"I want to become the strongest in the world, and I also want to win the World Cup and so on," Indra said. "I think it's fun, but sometimes my friends can get a bit sour when I get all this attention because I'm strong," she added, reflecting on the attention she receives.

Indra Lundqvist has been weight training since the age of seven under the supervision of her father Daniel, who is both a power lifter and a physiotherapist. In recent years, the approach to children doing strength training has changed markedly, after abundant research has shown that properly executed exercises are quite safe.

08:00am on a thursday with mum and little sister😗#morningworkout #tyngre

At the same time, Daniel Lundqvist pointed out that the heavier lifts are not his doing, as his own training method largely involves lighter weights.

"It's Indra who is keen on the heavier stuff while I hold her back. Sometimes we do raise it a bit heavier, but never put on a weight she cannot handle," Daniel Lundqvist explained.

Lundqvist's Instagram account, which has over 4,600 followers, boasts other records by the muscular little girl. Her squat record is currently set at 55 kilograms, while her bench press record is 30 kilograms.

In her home country, Lundqvist has plenty of strong women to imitate. One of the possible idols is acclaimed powerlifter Isabella von Weissenberg, whose personal squatting record is a mind-blowing 212.5 kilograms, which is almost three times as much as her body weight of 72 kilograms.

Double at 185kg (407.8lbs) followed by triples at 180kg (396.8lbs). Technically small PR since bw was at ~71.8 before the session and I’ve only repped at these weights when I’ve been around 74-75kg. Meaning, celebratory pizza coming up 🍕 I’ve been squatting almost every other day now for the past three and a half weeks. I have one more heavy session to go, but I think at least two rest days in between would be appropriate for that one because my quads feel a little out of it from this frequency.

👹🌸 When you look sweet but you're really not. From a photoshoot earlier this spring, with @barebells and photographer Marcus Syvertsen. #tyngre #barebells #marcussyvertsen #noxbox