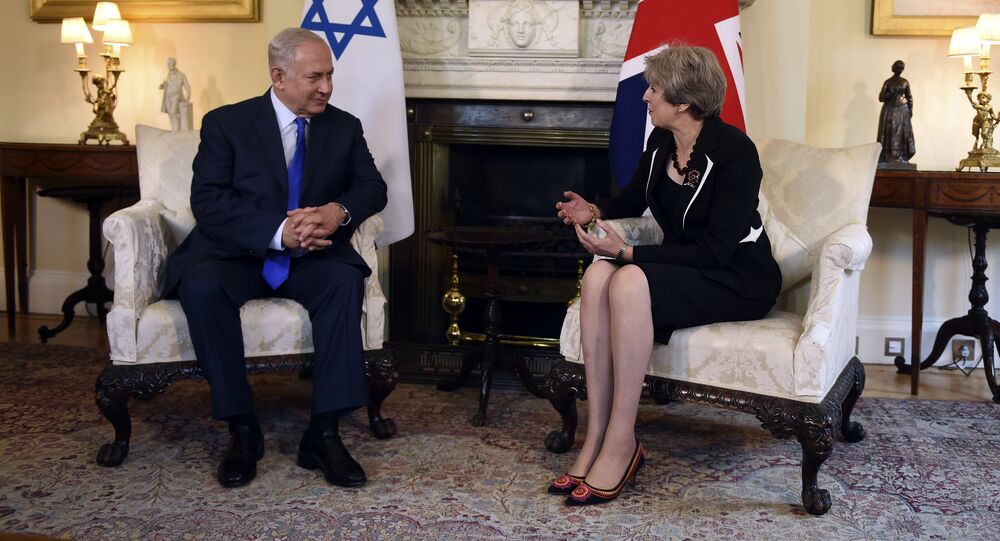 Theresa May has rejected calls for the UK to apologize for the Balfour Declaration, which paved the way for the establishment of an Israeli state in Palestine; however, her speech during a dinner with Benjamin Netanyahu has been criticized by many who say the British bear responsibility for the ensuing Israeli-Palestinian conflict.

Social media users have reacted with criticism to UK Prime Minister Theresa May's statement that the UK is "proud" of the Balfour Declaration, a letter sent from the UK Foreign Secretary on November 2 1917 which declared support for the establishment of the state of Israel in Palestine, then still a region of the Ottoman Empire.

"We are proud of our pioneering role in the creation of the State of Israel," May said, as she hosted Israeli President Benjamin Netanyahu for a dinner on Thursday to commemorate the centenary of the declaration.

Theresa May greets Benjamin Netanyahu at No.10. This evening she'll host him to mark 100 years since Balfour Declaration. Corbyn snubbing. pic.twitter.com/4j8TTKaVKl

​"When some people suggest we should apologize for this letter, I say absolutely not," May said.

The Balfour Declaration stated that the British government "view with favor the establishment in Palestine of a national home for the Jewish people," and would endeavor to bring this about.

Balfour D.
nothing shall be done which may prejudice the civil and religious rights of existing non-Jewish communities in Palestine#パレスチナo pic.twitter.com/pZmjEq07VT

​The wording was later incorporated into the British Mandate for Palestine which was issued by the League of Nations after the war. It declared that the Allies of World War One were "in favor of the establishment in Palestine of a national home for the Jewish people.'

Exactly 100 years ago today, Great Britain gave away Palestinian land to the Jews in the Balfour Declaration.

Britain did its utmost to break its #BalfourDeclaration promise. That uncomfortable fact was swept under the rug in #Balfour100. pic.twitter.com/7kT4fc9O9j

​​Twitter users were quick to criticize May's view of the declaration. On the one hand, some Israelis accuse the UK of breaking its promise; in 1939 Britain issued a white paper which limited Jewish immigration to Palestine and Jews' rights to buy land from Arabs.

@theresa_may celebrating #balfour reflects her insensitive nature & the failure of UK to recognise their role in sufferings of palestinians pic.twitter.com/7NYqREOEF0

​Palestinians regard the document as the beginning of a historical injustice in which a colonial power claimed the right to give away their homeland.

​I’m not interested in a British “apology” for Balfour Declaration. What we need is justice. Full restitution first, apologies later.

What a #shame! @Theresa_may says she will celebrate centenary of #Balfour declaration with 'pride'. This #caricature says it all. pic.twitter.com/RgAVFb45p1

​To mark the occasion, the British street artist Banksy organized a mock "apology party" for Palestinians outside his Walled Off hotel in the West Bank city of Bethlehem. However, the party was interrupted by Palestinians from the nearby Aida refugee camp.

​"We came because we didn’t like the use of the British flags or the way they were using Palestinian children," Aida activist Munther Amira, who planted a large Palestinian flag in the middle of a cake, told the Guardian.

On Thursday, the Palestinian Authority's Foreign Minister Riad Malki told Bloomberg that the government plans to hire a British law firm to lodge a legal claim against Britain in pursuit of an apology and compensation as a result of the declaration.

Israel Carries Out Airstrike Against Syrian Targets From Lebanon's Airspace

At Least 7 People Killed in Israeli Operation in Gaza