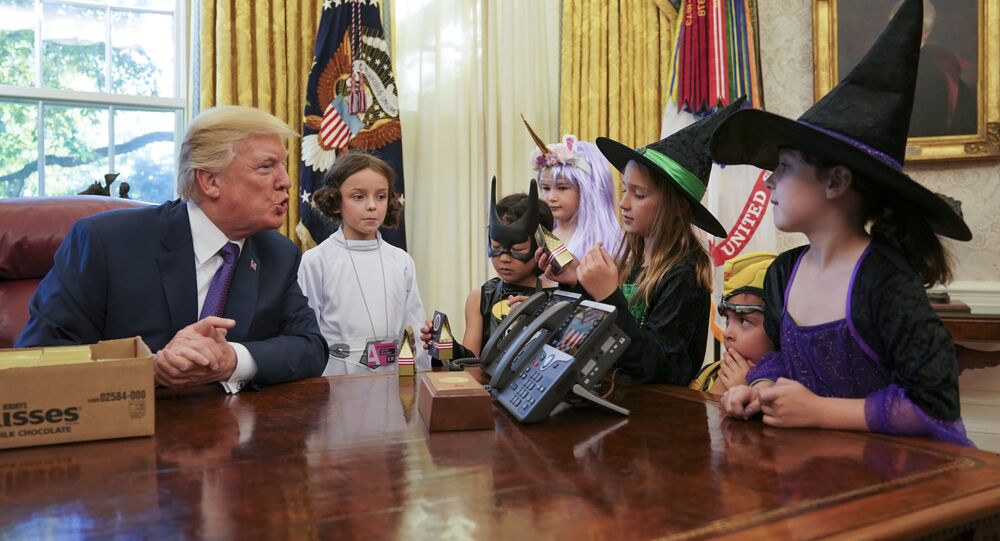 Don’t worry kids, you’ll get your candy – right after the president insults your parents.

US President Donald Trump has said he does not like to take breaks and today was no different, despite being surrounded by the children of reporters at a Halloween event.

Trump opens the trick-or-treat event at the White House complex by announcing he "cannot believe the media produced such beautiful children," before inviting them over with a tap of his hand. "How the media did this, I don't know," he mused.

​Before long, an apprehensive Batgirl catches his eye and after learning of her Japanese descent, informs the stoic child he's "going to be in Japan in a couple of weeks."

Before rewarding the children with candy, President Trump asks, "you gonna grow up to be like your parents?" and quickly stops himself when one princess responds with a deadpan stare.

Always one to champion healthy living, the president cheerfully observes, "you have no weight problems, that's the good news," as he passes out White House candy to the kids.

Twitter, predictably, had a field day with the exchange:

Dear. The Turkey pardon is going to be priceless this year. Just priceless.

Poor #princessleia costumed little girl was like nope, not getting too close to this one. pic.twitter.com/4J6VOTkpHY

​To be fair, Trump played his role well, because undermining a group of children's parents right in front of them is indeed pretty spooky.

Has Halloween Gone to the Dogs?