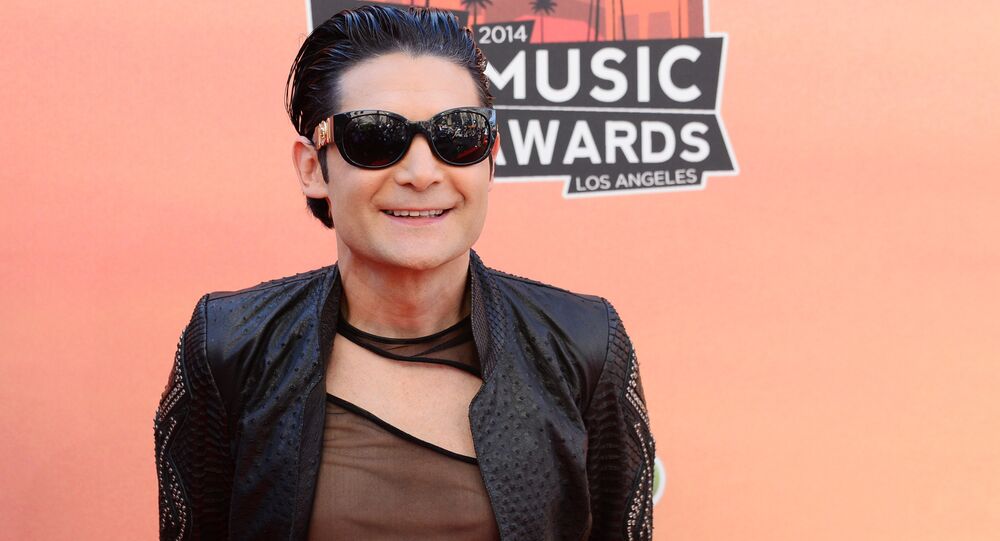 Actor Corey Feldman, who has been making claims about sexual abuse in the US movie industry for years, has announced a $10 million plan to crowdfund a no-holds-barred film that will reveal all about his experiences as a child star; his remarks sparked a strong reaction on social media and supporters have already pledged almost $100,000.

Corey Feldman, who has long made allegations about sexual abuse in Hollywood, has launched a crowdfunding drive in an effort to make a film that will uncover a pedophile ring which he claims is operating in the US film industry.

Feldman, 46, has claimed that he and fellow child star Corey Haim were sexually abused when they were child actors in the 1980s.

​He first made the explosive accusations in his 2013 memoir, Coreyography, in which he said that Haim was raped at the age of 11, Feldman was sexually assaulted as a teenager, and that they spent their teenage years in the film business constantly surrounded by pedophiles.

Feldman didn't reveal the identity of the alleged abusers, but said that Haim's rapist was "one of the most successful people in the entertainment industry" and that he feared for his and his family's safety if he revealed their identities.

We American Patriots support you! Please be careful! Thank you for your bravery! #IStandWithCorey
End #PedoWood pic.twitter.com/aXj3fAiySg

​A picture of Feldman and Haim in the 1980s, when they were known as the "Two Coreys."

On the IndieGogo crowdfunding site, Feldman is asking for $10 million in donations so he can implement a "plan that I believe can literally change the entertainment system as we know it," and "potentially bring down a pedophile ring that I've been aware of since I was a child."


"Right off the bat I can name six names — one of them who is still very powerful today, and a story that links all the way up to a studio. It connects pedophilia to one of the major studios," he said in a Youtube video posted on Wednesday.

By Thursday, Feldman's campaign had raised $94,982 of his total, donated by 1873 backers. Feldman says he needs the money to produce and distribute the movie, as well as ensure extra security for himself and his family due to security threats.

ALSO LET ME ADD, THIS IS NOT ABOUT FEAR OF BEING SUED! YES THATS A REAL POSSIBILITY BUT THE BIGGER REASON IS SAFETY 4 MY FAMILY!

​Feldman's plan has been met with a mixed reaction. While some users dismissed his campaign as a "scam," many others used the #IStandWithCorey hashtag to express their support.

anybody that donates is a sucker…telling the #truth is free, we don't need to anguish through a biopic

To all'a'y'all who keep saying "@Corey_Feldman should just name his abusers": he did. To the police. In 1993.

Why make a movie of your life to get your story out? This is clearly a scam. This whole thing has been nothing but a way for you to profit.

Pls donate to Corey Feldman’s indegogo to finance his film, provide him & his family w protection.
He’s incredibly brave to take this on.

Corey Feldman should just go on every network he can get on and tell his story raising money to make a film takes too much time.

While there is justified anger over #HarveyWeinstein please BELIEVE Corey Feldman- Hollywood Pedophilia https://t.co/xcWAx3eXnE via @YouTube

​​​Some users called on Ronan Farrow, the author of the New York Times expose on film producer Harvey Weinstein's sexual harassment of women in the entertainment industry, to take on Feldman's cause.

​Feldman's announcement comes after he posted a tweet several days ago to say he was "working on a plan" to "get actual justice" for victims of child abuse.

THAT SAID I AM WORKING ON A PLAN THAT MAY B A WAY FORWARD 2 SHED SOME LITE ON THIS SITUATION! IF I CAN FIGURE OUT A WAY 2 GET ACTUAL JUSTICE

​Last week, Feldman and his band, Corey Feldman & The Angels, were apprehended by police in Louisiana for marijuana possession. Some sought to connect the incident with the allegations he had made; Feldman himself called the timing "ironic," explaining that he received a misdemeanor charge and that the marijuana was used by a member of the band for medical purposes.

Corey Feldman was arrested on drug charges Saturday night. I'm sure his arrest was purely coincidental to his allegations resurfacing. 👌

I DO FIND THE TIMING OF ALL THIS IRONIC! BUT HAVE NO FEAR, WE R HEADED 2 HOUSTON, & WE WILL PERFORM THE BENEFIT CONCERT 2NITE 2 HELP RAISE $

CREW HAVING MEDICAL MARIJUANA, WITH A LEGAL CA PRESCRIPTION, I HAD NOTHING ON ME, BUT WAS CHARGED BECAUSE ITS MY BUS. ALSO 5 OTHERS WERE