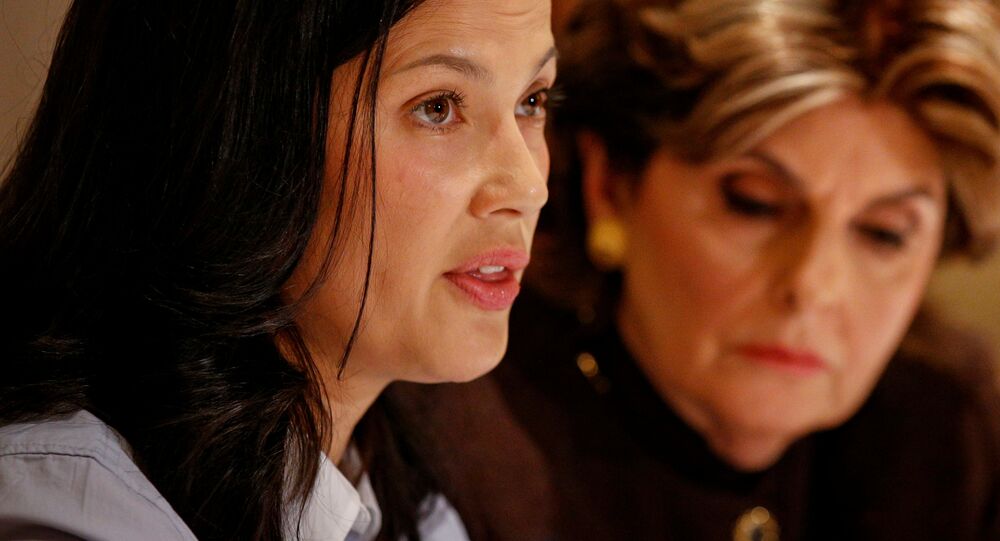 Accompanied by laywer Gloria Allred at a press conference in New York on Wednesday, Malthe said that the incident happened after she met Weinstein at the 2008 British Academy Film Awards, also known as the "BAFTAs."

She says he  "put on the spot" at the award ceremony and asked her what hotel she was staying at in London. Malthe reluctantly told him her hotel and was later woken in the middle of the night by "repeated pounding" on the door, with Weinstein shouting, "Open the door, Natassia Malthe, it's Harvey Weinstein."

Malthe says that she opened the door because she was "mortified and humiliated" that other people in the film industry staying at the hotel would hear the commotion and "think that I was sleeping with him."

When she opened the door, Weinstein looked dishevelled and Malthe suspected that he might have been on drugs. He "barged into" her room, "took off his pants" and sat on her bed, which led the actress to feel "panicked," Malthe says.

"He began speaking about various A-list actors who he claimed had slept with him. He told me that these actresses had gotten to where they were because of him and because they had sex with him."

"He told me that every female Oscar winner had to thank him when they received their Oscars because he had made that possible. He said that he could give me a movie part in an upcoming film, with the implication being that I had to sleep with him in order to get it," Malthe alleged.

Referring to an earlier meeting in a hotel room at which Weinstein had asked her to perform a sex act on him, in the company of another actress, Malthe says she "told him that I do not give blow jobs in response to him asking for one."

"I was sitting on the bed, talking to Harvey, when he pushed me back and forced himself onto me. It was not consensual," Malthe said. She added that Weinstein "did not use a condom, however he did not ejaculate inside me," but "after having sexual intercourse he masturbated and ejaculated."

Malthe says she was "completely grossed out" and "disassociated during that time he was having sex with me. I laid still and closed my eyes and just wanted it to end. I played dead."

Malthe, a Norwegian-born actress who has starred in the movies "Elektra," "Skinwalkers," and "DOA: Dead or Alive," says that the day after the alleged rape, Weinstein sent her a script for the movie musical Nine.

Variety reports that she auditioned for the film's director but ultimately withdrew from the project after another hotel room meeting with Weinstein, where the producer asked her to perform a sex act on him, along with another actress.

Weinstein has also been accused of rape by the actresses Rose McGowan and Asia Argento and his former production assistant Mimi Haleyi. On Tuesday, Haleyi told reporters that she was raped by Weinstein in a child's bedroom when she visited his loft apartment in New York in 2006.

© REUTERS / Danny Moloshok/File Photo
Producer Harvey Weinstein and his estranged fashion designer wife Georgina Chapman, who announced she has left him amid the scandal
Scores of woman, including Gwyneth Paltrow, Angelina Jolie and Lena Headey, have come forward with allegations of sexual assault against Weinstein since the New York Times ran an expose on October 5, which alleged that Weinstein had paid off women who'd accused him of sexual assault since the 1980's.

While some of Weinstein's colleagues in the film industry such as Quentin Tarantino had admitted that they knew of allegations that Weinstein sexually assaulted woman, others such as George Clooney and  Meryl Streep maintain that they didn't know.

As a result of the scandal, Weinstein has been fired from the board of the Weinstein Company, which he co-founded with his brother in 2005. They also founded the Miramax production company in 1979. Weinstein has been expelled from the Oscars' academy, which awarded him the 1998 Best Picture Oscar as producer of Shakespeare in Love. He was also nominated for Gangs of New York in 2002.

© AP Photo / Matt Sayles
'I Knew': Tarantino Finally Speaks Out About Weinstein Sexual Harassment Scandal
The scandal has reverberated across the film industry, with actors accusing other film industry figures of sexual harassment.

On Monday, the Los Angeles Times reported that Oscar-nominated writer James Tobin has also been accused of sexual misconduct toward scores of women looking to work on his projects, or simply sexually harassing women on the streets of New York City.