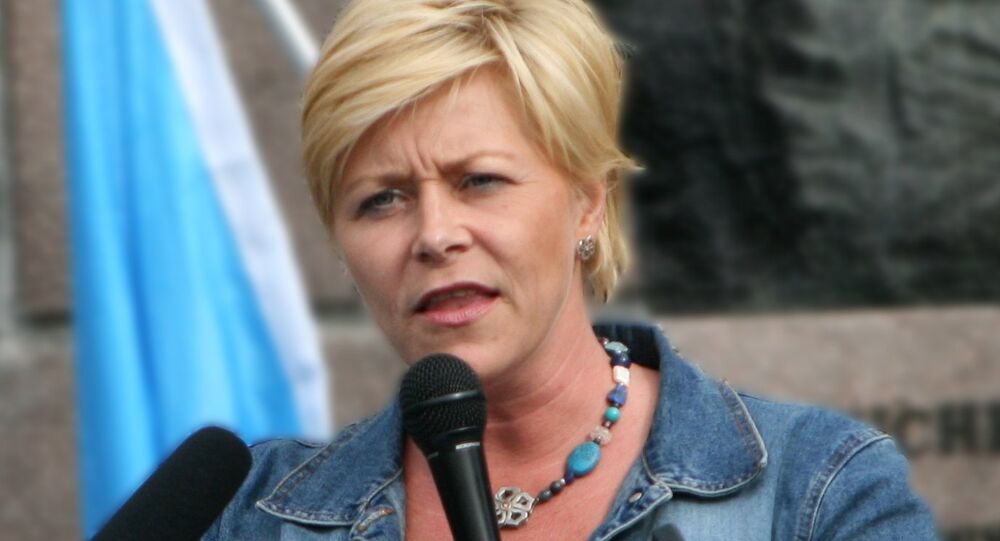 Norwegian Finance Minister Siv Jensen has landed in hot water after sporting a Native American outfit during a costume party at her ministry. A seemingly harmless photo has triggered a nationwide debate, with Norway's ethnic minorities accusing Jensen of bad taste and cultural appropriation.

The photograph of Norway's Finance Minister Siv Jensen of the Progress Party taken during a Wild West-themed party at her ministry has ignited a polarizing debate in the Nordic country. Many local politicians and celebrities joined the dispute dubbed #kostymegate ("costume gate"), expressing opposing opinions.

"When someone uses a costume like this, I believe they don't understand indigenous culture and the oppression these groups have experienced," Kenzie Allen, a PhD student at the University of Wisconsin-Milwaukee, assistant at the Faculty of American Indigenous Studies and a member of the Native American Oneida tribe, told Norwegian national broadcaster NRK. According to her, Native Americans' heritage often gets portrayed as a travesty.

This attitude was shared by members of Norway's own indigenous community, the Finn-Ugric Sami people, who inhabit the northern parts of the country. Aili Keskitalo, the newly elected president of the Sami parliament, argued it was "tasteless" of the finance minister to use the symbols of a threatened people as a "humorous gimmick."

"This is an example of cultural appropriation. I know exactly how it feels when I see a fake Sami jacket — it cuts my eyes. I do not think Siv Jensen would put it on, as she herself would see it as tasteless. This is why I don't understand why she wore that costume either," Aili Keskitalo said, as quoted by the Norwegian daily Verdens Gang. She also argued that behavior was rooted in colonialist attitudes and went on to post a picture of herself in a traditional Sami outfit tagged "not a costume."

Norwegian actress Ulrikke Falch, known as from the youth series Skam ("Shame") joined the chorus of critics by writing "Human culture is not a costume" on her own Instagram account. In an opinion piece published by Verdens Gang, Falch went on to accuse Siv Jensen of cultural appropriation.

"It is also noteworthy that those who support Siv Jensen's use of the costume are mostly white, older men," Ulrikke Falch wrote.

© CC0
Everything Butt: Norwegian Bare Bottom Craze Sweeps Internet (PHOTOS)
On the other hand, Norway's former Culture Minister Hadia Tajik, who is of Pakistani origin, turned out to be supportive of Siv Jensen.

"I believe Siv Jensen made a nice Pocahontas, I am more critical of her policy," Hadia Tajik tweeted, adding that Jensen was ready to borrow from her, should she want to dress up as a Bollywood princess.

"I believe that most Norwegians perceive this to be a completely harmless party outfit. Some dress up like pirates, others like Superman, cowboys or Indians," Tvedt told the Norwegian web newspaper Nettavisen, ensuring that people enjoying themselves did not anything to do with ridiculing minorities, indigenous people or other groups. "This harassment hysteria from the USA, we don't need it in Norway," Tvedt added.

On social media, many Norwegians were skeptical about the uproar the outfit created.

"The safest bet is to cancel Halloween this year. For the sake of Indians, Transylvanians, strippers, Eskimos, nurses, princesses, cowboys, pirates, etc.," a user tweeted sarcastically.

Incidentally, Jensen's unfortunate choice of clothes coincided with a hot debate in America about the use of such costumes. Last week, Walmart Canada pulled a number of native American-themed Halloween costumes from its website, including "native princess" and "chief," pledging to begin a consultation process to revisit its guidelines addressing cultural sensitivity, CBC reported.

​Ironically, Danish Countess Alexandra, the ex-wife of Prince Joachim of Denmark, donned a Pocahontas outfit earlier this month during a similar Wild West-inspired party in Copenhagen, without causing such a stir.

Cutting Edge: Norwegian Army Has $5Mln of Earplugs That Make Your Ears Bleed