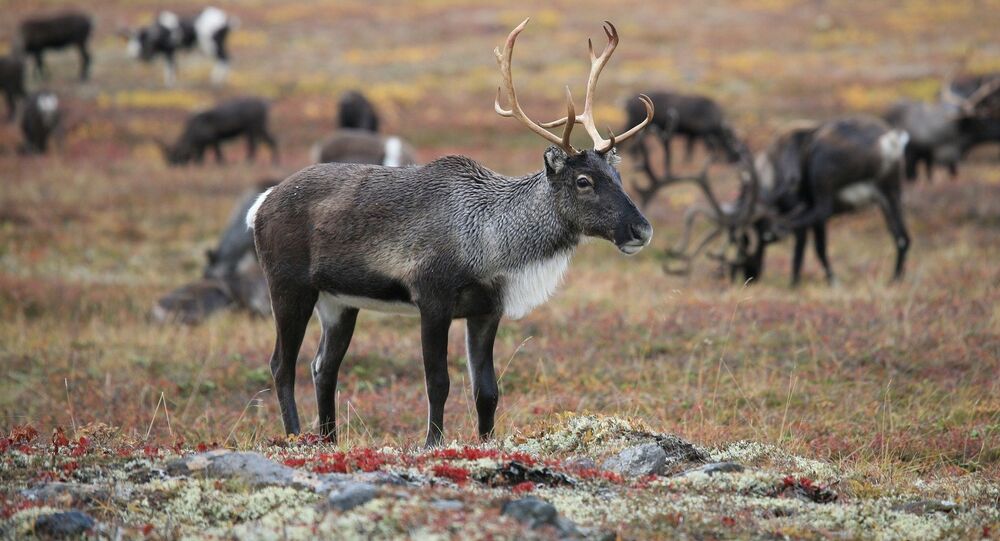 Harmless reindeer crossing the border between Norway and Sweden have caused a bitter conflict between the two nations who otherwise enjoy peace and harmony.

Norwegian Agricultural Minister Jon Georg Dale, representing the nationalist Progress Party, acrimoniously broke off attempts to broker an agreement with Swedish authorities over reindeer moving across the border. The minister has instead begun work to limit the number of animals migrating over the frontier.

"The challenge is that the number of Swedish reindeer on Norwegian pastures is increasing, whilst we on the Norwegian side must regulate reindeer movement because we have insufficient pasture ground," Jon Georg Dale explained to NRK, venturing that Swedes "had only themselves to thank" for the reindeer row.

© Photo : Youtube/ Dagbladet
Norwegian Shepherd Forms Giant Heart for Wife Using Hundreds of Reindeer (VIDEO)
The law allowing the indigenous Sami people on the both sides of the Norwegian-Swedish border to tend grazing herds in either country has existed for centuries in one form or another. The most recent agreement effectively lifting the barriers for the Sami people was signed in 1972, but expired in 2005.

At present, the two Nordic nations are using slightly different legislations, which results in conflicts between the corresponding authorities. Furthermore, Dale claimed the Swedish authorities have deliberately delayed the negotiations process by repeatedly declining an extension of the existing agreement.

To add fuel to the fire, the President of Sweden's Sami Parliament Per Olof Nutti said that Norwegian politicians fail to understand the rights of the Sami on the Norwegian side and claimed them to "lack the prerequisites to do so." Nutti also called on politicians on both sides of the border to take responsibility for an agreement to be finally reached.

"We are two countries basing our management of different laws. On the Norwegian side, we are concerned with ecological sustainability, so I can understand the demands," Ellinor Marita Jåma told NRK, nevertheless voicing her disappointment that no deal has still been reached. She also added that she was hoping for concessions from the Swedish authorities.

At present, there are an estimated 20,000 Sami living in Sweden, as opposed to over 50,000 in Norway. About 10 percent of the overall Sami population engages in reindeer herding as a means of subsistence.

#41: The #Sami are an indigenous ethnic minority with their own distinct culture, language and parliament, mainly living in the North. pic.twitter.com/1knuTJlyQo

​There are an estimated 275,000 reindeer in Sweden, with an annual branch turnover of approximately SEK 230 million per year ($29 million). In Norway, the population of herded reindeer is estimated at 250,000. A staggering 45 percent of the Nordic country's area is used for reindeer herding.

This is how the Sami people separate the neighbours' reindeer from their own herds. _ Video by NewsLab. _ #visitnorway #norway #travel @northernnorway #natgeo #insta #reindeer

Not a Unicorn, But Close Enough: Majestic Snow-White Moose Filmed in Sweden