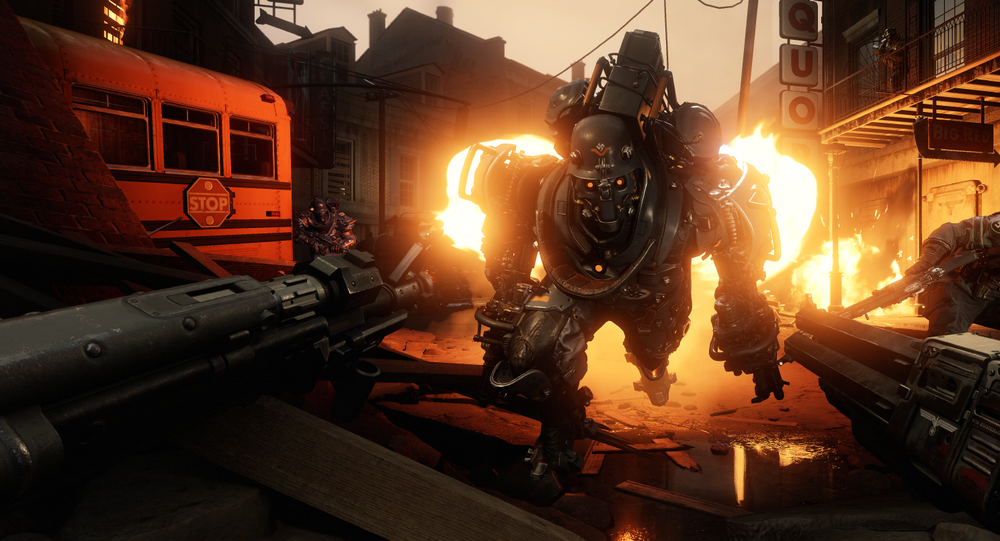 So depicting the Nazis as bad guys and promoting the idea that America should be free of this horrible idea has resulted in a massive keyboard war erupting online.

The official Twitter account of the Nazi-killing video game "Wolfenstein II: The New Colossus" posted a trailer for the upcoming release. The tweet also read "Make America Nazi-Free Again." The 13-second-long video shoes heavily armored soldiers marching in the streets of an American city under Nazi flags. The message in the video reads, "Not My America."

The slogan has sparked controversial responses on social media, with some angry with the game publisher, Bethesda Softworks, for making a game depicting Nazis as bad.

imagine seeing the words "no more nazis" and reacting like this pic.twitter.com/5L9b8CPm3s

The amount of people legitimately upset by the new Wolfenstein trailer is equal parts sad and hilarious pic.twitter.com/icrl0CfiyO

In particular, some were angry over the similarity between the game's slogan and the line "Make America Great Again" made famous during Donald Trump's presidential campaign.

Seriously @BethesdaStudios @wolfenstein, the issue isn't that you are anti-Nazi, it's that you implied Trump is one via slogan parody.

However, there have been many of those who see no controversy in the words that America should be free of Nazis, expressing support for the righteous message of the game.

Imagine somehow being offended by a video game which is against Nazis…
Keep it up @wolfenstein #nomorenazis pic.twitter.com/XaBlMnZA6n

Fun Facts! If any of y'all didn't know, this is what a Nazi is supposed to look like. #NoMoreNazis #MakeAmericaNaziFreeAgain @wolfenstein pic.twitter.com/XGEaEM4c6p

Anyone who refuses to denounce Nazis is a threat to liberty. #NoMoreNazis

I support #Wolf2 and their goal of #NoMoreNazis. Nazis don’t belong in power, they deserve to be all over the room after being exploded.

Meanwhile, Pete Hines, Bethesda's VP for PR and marketing, stressed that anti-Nazism is what the "Wolfenstein" games have always been about.

"Wolfenstein has been a decidedly anti-Nazi series since the first release more than 20 years ago. We aren't going to shy away from what the game is about," Hines told Gamesindustry.biz.

"Wolfenstein 2: The New Colossus" is the sequel to the highly-acclaimed "Wolfenstein: The New Order" that was released in 2014. The new game is set in 1961, in an alternative timeline where Nazi forces occupy the United States. The game is scheduled to be released on October 27.