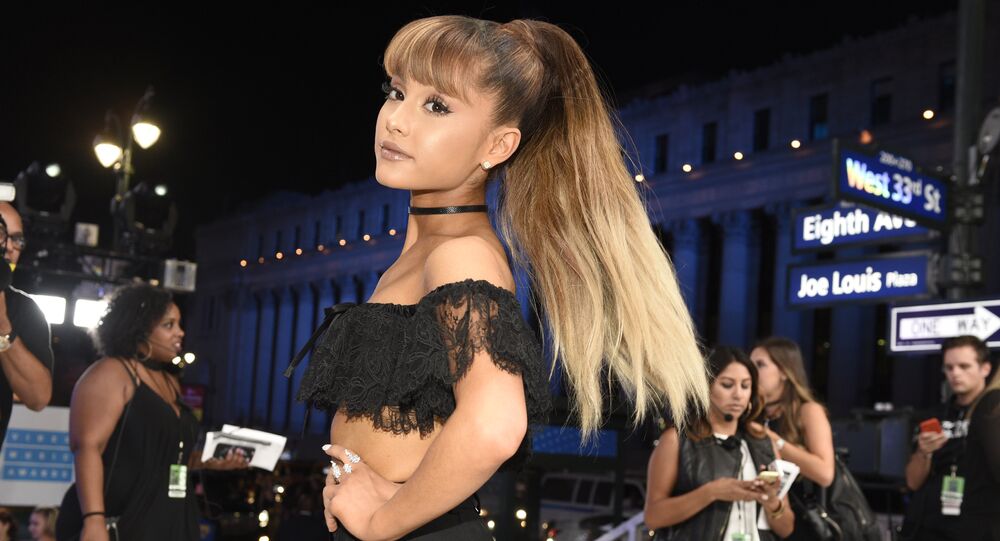 Ariana Grande has called for "gun control" in the wake of the Las Vegas massacre and also called it "terrorism." Many celebrities joined the singer, whose concert in Manchester was bombed earlier this year, in paying tribute to the victims.

Ariana Grande, whose concert in Manchester was bombed in May, has called the Las Vegas massacre "terrorism," a word US President Donald Trump has assiduously steered clear of using for the murder of 58 people.

Grande, who has 53 million followers on Twitter, also gave her support to gun control.

My heart is breaking for Las Vegas. We need love, unity, peace, gun control & for people to look at this & call this what it is = terrorism.

​Many other celebrities also tweeted in a similar vein, with Lady Gaga saying it was "terrorism plain and simple."

There's nothing I can tweet that will heal the heartache being felt today, but all my heart is with Las Vegas. This is domestic terrorism.

The worst mass shooting in US history occurred in Las Vegas. A white man opened fire on a music festival. Call it what it is. Terrorism.

50 dead. Over 400 in the hospital. And we continue to call this a LONE WOLF? Call it TERRORISM because that's what it is.

I feel sick and heartbroken by this act of terrorism inside of our country. I have no words.

MY HEART ACHES HEARING ABOUT THE SICKENING HORROR IN LAS VEGAS. THIS SENSLESS ACT OF TERRORISM WILL NEVER DIVIDE US.

It sickens me the ease in which a TERRORIST can be sold a GUN. Is the ease really worth all these lives?! This needs to stop.

Thousands of country music fans were watching singer Jason Aldean on stage when Stephen Paddock starting firing at them from the 32nd floor of the Mandalay Bay Hotel and casino in Las Vegas on Sunday night, October 1. The death toll has reached 59, with 515 people injured, making it the worst shooting in US history, overtaking the Orlando nightclub shooting in Florida last year.

​But although that case was described as "terrorism" because the gunman Omar Mateen, 29, swore allegiance to Daesh, few US politicians have used the same phrase to describe Paddock's attack.

Police found 23 guns in the hotel suite where the 64-year-old shot himself as a Swat team closed in and another 19 firearms and thousands of rounds of ammunition in his home in nearby Mesquite.

Trump referred to the killer as "pure evil" without commenting on his motivation or his possession of so many guns.

​"He brutally murdered more than 50 people and wounded hundreds more. It was an act of pure evil," said Trump.

Several critics of the US President pointed out that Trump had mentioned "god" six times in his 574 word speech but never mentioned "guns" once.

In February, Trump made a speech in which he praised the National Rifle Association — the main gun lobby group — and promised to protect the Second Amendment, which is the right of Americans to "bear arms", even in some cases automatic weapons.

​Nevada has some of the most relaxed gun laws in the US and people do not even need a permit to buy a weapon.

It is perfectly lawful to bring a gun to a casino or a bar and it is also legal to own military-style assault weapons, like the type Paddock used to gun down hundreds of people.

US Gun Laws to Be Discussed 'As Things Go By' - Trump