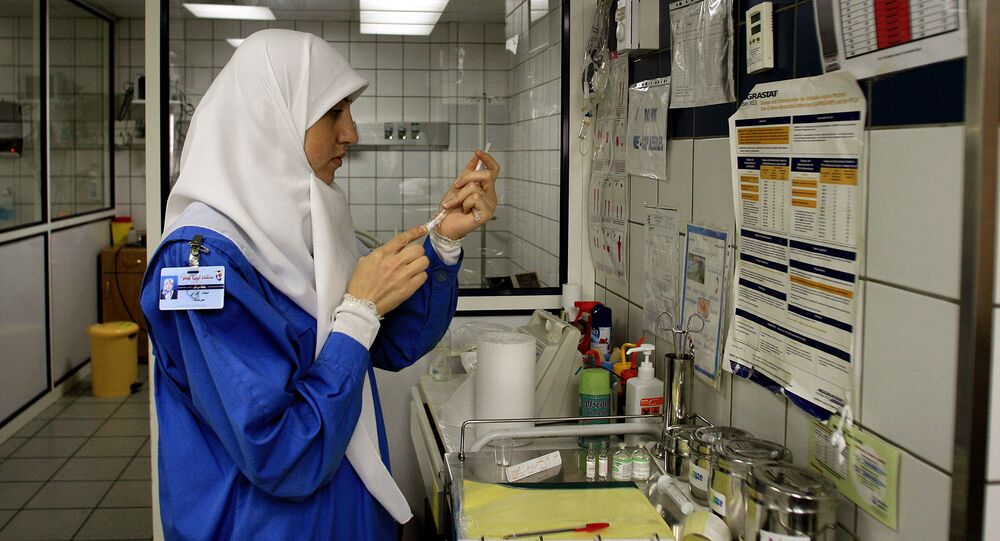 A Muslim nurse who was previously banned from wearing Islamic clothing at work for sanitary reasons has been supported by the Swedish Ombudsman for Discrimination, which thus ranked religious reasons above hygienic considerations in a ruling that may set a precedent for the future.

A Muslim woman was employed as a nurse at the maternal ward at Södersjukhuset Hospital (SÖS) in Stockholm and was immediately informed that long-sleeved clothes were not to be used due to the institution's hygiene rules.

The woman then tried using removable disposable arms to shield herself from men in accordance with the mandates of Islam, but was also denied this option. The woman decided that she was being discriminated against because of her religion and reported the hospital to the Anti-Discrimination Ombudsman's Office (DO), which, perhaps surprisingly, took the woman's side, the trade newspaper Dagens Juridik reported.

© CC0
Breaking Barriers: Sweden's First Muslim Party Hopes to Make Way Into Parliament
Although the hospital clarified that all staff must work with naked forearms for the sake of hygiene and patients' safety, the DO contended that such rules only were justified if given a "legitimate purpose."

The DO ruled that there was nothing in either the National Board of Health's regulations or in the Stockholm County Council's basic hygiene routines that prohibited single-use protective clothing, provided that they are replaced with each new patient.

"According to the DO's evaluation, neither of these regulations or hygiene routines therefore prevents SÖS from allowing healthcare professionals to wear disposable arms for religious reasons in cases where risk assessment shows that it is acceptable," the DO ruled.

The Muslim woman's claims that the SÖS systematically violated the anti-discrimination law were thus supported as "not bearing any risk of contamination."

Previously, the DO sparked a controversy by arguing that a Muslim school that separated its pupils by gender on a school bus acted in full accordance with the Nordic country's discrimination laws.

Earlier this year, a documentary by Swedish broadcaster TV4 featured footage of the privately-run al-Azhar Primary School in a Stockholm suburb, showing boys entering a bus from the front, and girls from the back. This led to a public outcry and criticism from politicians, including Prime Minister Stefan Löfven, who argued that it went against the grain of Sweden's long-standing commitment for gender equality.

The school justified its actions by claiming some of the boys were being unruly and disruptive. The al-Azhar school describes itself as having a Muslim profile, yet claims to be open to students from all backgrounds. Around 80 percent of the staff are non-Muslims, according to its vice principal.

© Photo : Kalle Alm/facebook
Arab-Speaking Swede Rises to Internet Stardom in Muslim World
In yet another case involving a clash between secular ethics and Islamic norms, the DO sued an interpreter company that interrupted a job interview when it was found that the jobseeker refused to shake hands with persons of the opposite sex. The DO claimed that the woman, who justified her refusal with religious beliefs, had been discriminated against and demanded SEK 80,000 ($9,800) in compensation.

Iranian-born Maria Rashidi, the founder and the chairperson of the Swedish NGO Kvinnors Rätt ("Women's Rights") accused the DO of "ethnocentric thinking" in her recent opinion piece in the Swedish daily Dagens Nyheter. Rashidi claimed that religious rights were prioritized above human rights, which she described as "increasingly relativized" and "multiculturalized." Rashidi also called on everyone to adapt to the laws of the country in which they live.