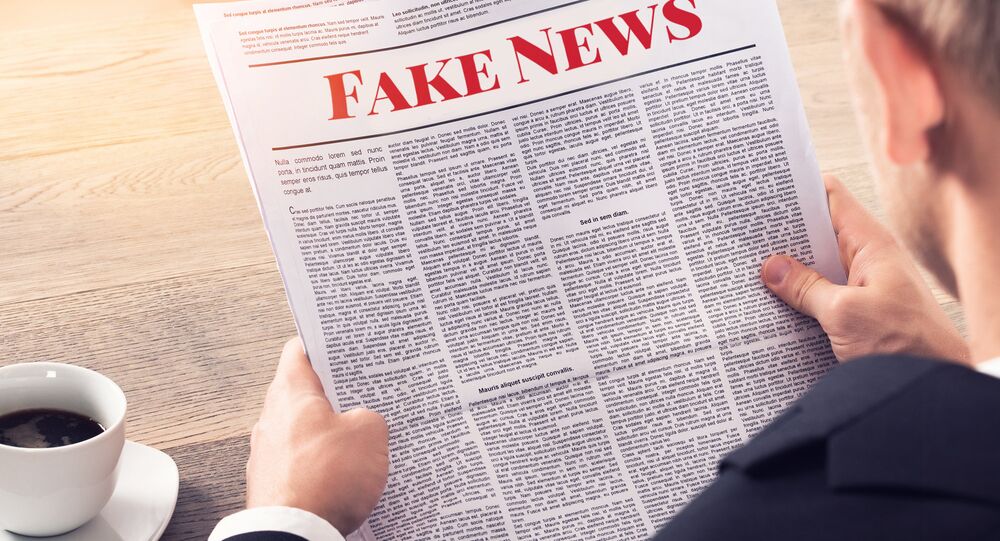 Paul Horner, the famous fake news writer who boasted that his articles had helped get Donald Trump elected, has been found dead in his bed in his home outside Phoenix, US media have reported. Sputnik rounds up the most infamous Horner articles that politicians, companies and the media fell for.

The Maricopa County Sheriff's Office confirmed Tuesday that authorities found Horner on September 18, adding that he may have suffered an accidental prescription drug overdose, according to CBS. Horner was reported to have had a history of using and abusing prescription medications.

Not So Humble Beginnings

Horner began his career in fake news in 2013 as the lead writer with National Report, a 'satire' site occasionally mistaken by some as a serious news source. Possibly his first claim to 'fake news' fame came later that year, when he wrote an article claiming that then-President Barack Obama would use his own money to keep a Museum of Muslim Cultures open during a government shutdown. The 'story' became an instant hit, making it to Fox News, which took it and reported it as fact.

© Photo : Pixabay
'Natural Order of Internet Has Been Disrupted': Twitter Users Shocked by Social Network Super-Sizing Posts
The same year, after going after conservatives, Horner took aim at liberals with the claim that Arizona governor Jan Brewer had announced a program to turn the state's gay schoolchildren straight using 'conversion therapy'. The story went viral, leading liberals to freak out over their 'fascist' governor's horrifying 'plans'.

Horner garnered another hit in the internet world in 2014 with the claim that Banksy, a famous anonymous Britain-based graffiti artist and political activist, had been caught and arrested. The story was picked up by several semi-serious news sources before being outed as a fake.

Horner scored another success in 2014 with the claim that Facebook was preparing to charge users a $2.99 monthly user fee. That story also got picked up online, making it into several tech-focused news sites and tabloids.

The Birth of a Fake News Empire

Horner left the National Report in late 2014 to set up a small fake news empire, launching the News Examiner, purchasing foxnews.com.de, usatoday.com.co, ABCnews.com.co, nbc.com.co, and a host of other sites with names similar to real news sites, some of them even mistakenly picked up by Google News.

© CC0
Coal Exports Banned? No Problem: North Korea Goes Bitcoin Mining
The writer had another a splash with the claim that the Yelp review service was suing the creators of the cartoon South Park for $10 million, prompting the company to issue an official response. Another story, claiming that a doctor in South Africa had successfully performed head transplant surgery, also gained popularity. That same year, two more Horner pieces went viral, including the claim that a Vermont pastor received prison time for refusing to marry a gay couple, and that a 'former secret service agent' had revealed that Barack Obama was a secret gay Muslim.

Horner subjected the residents of the small town of DeQuincy, Louisiana to numerous hoaxes, with local authorities threatening to arrest him and some residents threatening to cause him physical harm thanks to stories about the town legalizing polygamy, banning twerking and refusing entry for people from Korea.

In 2016, a Horner story claiming that drug kingpin El Chapo had escaped a third time prompted Mexican authorities to publish pictures of the criminal behind bars. Another story, about the NBA moving the 2017 Charlotte All-Star Game, was also picked up by national media, prompting the NBA to issue a statement assuring fans that this wasn't the case. A separate hoax, taken seriously by at least one NBC executive, claimed that Breaking Bad was planning a sixth season.

© AFP 2021 / LIONEL BONAVENTURE
Hacker's Delight: Tinder Tracks, Stores Everything Users Do
In the meantime, Horner also continued his political satire, with a story about President Obama signing a ban on the sale of assault weapons going viral and another suggesting the president would appoint a Muslim to replace Justice Antonin Scalia in the Supreme Court, provoking the ire of conservative Facebook users.

As the 2016 presidential race heated up, Horner created his most-read fake news story yet, duping Eric Trump, Sarah Palin, Ann Coulter and even then-candidate Donald Trump into believing that the Clinton campaign was paying protesters thousands of dollars to crash Trump rallies.

Horner wrote a slew of other political fakes, claiming that the Amish had committed to voting Trump, and that comedian Bill Murray would be running for president.

© AP Photo / Mary Altaffer
'Bad Day' and 'Existential Crisis': Kelly's 'Facepalm' During Trump's UN Speech Causes Internet Meltdown
Following the 2016 race, major news sources, including the Washington Post, ran profiles on the writer, providing him with minor celebrity status. Some of these same media sources even claimed that Horner had influenced the 2016 election, with the writer admitting that it was true that Trump supporters had repeatedly picked up his stories without fact-checking them.

Setting his sights on the new President, Horner continued his media trolling campaign into 2017, writing a fake story about Trump's resignation, another about his order to cancel the comedy sketch show Saturday Night Live, another about the President being forced to delete his Twitter account, and another still claiming that Trump had signed an executive order allowing for the hunting of bald eagles. All these stories prompted resources like Snopes and Politifact to conduct investigations into the stories' authenticity.

Horner's style consisted of the use of real people, events, or images, lending credibility to the rest of the (made up) material. At his peak, it was believed that he was making up to $18,500 a month for his stories, or even $10,000 a day during peak periods, thanks to Google AdSense.

In a post on News Examiner, updated just days before his death, Horner, going under the pseudonym Jimmy Rustling, insisted that his writing consisted of "stories with a purpose, things I see wrong in society and stuff that I feel passionate about. In the past, the articles that I wrote were always called political satire, hoaxes, pranks, and shenanigans, but now with the whole 'fake news' epidemic going on out there, I'm lumped into just that single category. Personally, I think everything that is happening right now is a great thing. With Donald Trump calling everything he doesn't like 'fake news', and me doing what I'm doing, the general public is finally waking up to the reality of questioning the news you read and the importance of fact checking. That was always a goal for me when I started out doing this, so now that all of this is actually happening, I'm really happy."

Sputnik has not been able to independently verify Mr. Horner's death.