English football fans can "absolutely" wave national flags in support of their team at the 2018 World Cup in Russia this summer despite warnings by a police chief in Britain, according to a spokesperson for Visit Russia office in the UK.

Speaking earlier this week, deputy chief constable Mark Roberts stressed that simply unfurling English national flags in public during the championship was inadvisable, adding: "The fact of the matter is you are bringing increased attention and risk on yourself." 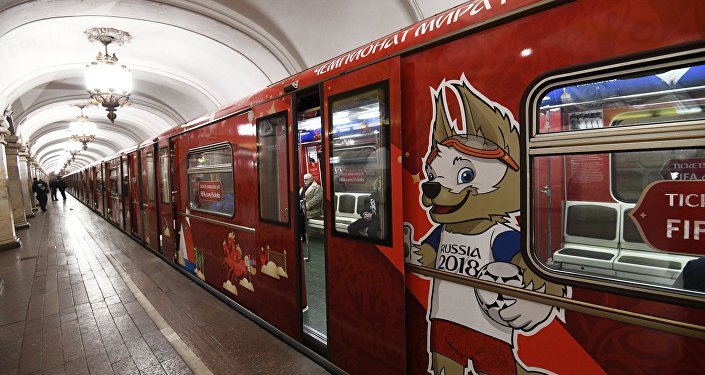 His comments come among what is considered a strain in relations between London and Moscow over a number of political issues, including the removal of British diplomats from Russia, in response to a similar move by the UK following the poisoning of former Russian spy Sergei Skripal and his daughter in Salisbury, UK.

However, a spokesman for Visit Russia office in London Igor Karzov told Sputnik that political tensions have no major impact on relationships between people and British people are still very welcome in Russia.

"Cultural ties between our countries remain strong. We do value and love British culture, literature, language and the country is among the main tourist destinations among Russians."

Mr. Karzov also addressed the issue raised by the UK national lead for football policing, regarding the national flag display in Russia by British fans.

"I can assure British fans that it's absolutely fine to support their teams with the national symbols including flags. And we have good examples of this during recent matches between Arsenal and CSKA.

CSKA Moscow hosted a match with Arsenal on April 11, with British fans traveling to support their team and enjoyed a warm welcome in Russia's capital, despite various warnings voiced in the UK media.

© Sputnik / Vladimir Astapkovich
Escaped Bears, Not Fuzzy Hats: How British Soccer Fans Survived a Moscow Visit (PHOTO, VIDEO)
Mr. Roberts also referred to the fact that England fans have sung about World War II during encounters with German supporters and warned against similar behavior in Russia, especially in the city of Volgograd, formerly Stalingrad. The Battle of Stalingrad, regarded as one of the largest and bloodiest battles in the history of warfare, became a major turning point in the war and paved the way for the subsequent allied victory over the Nazis in May 1945.

Mr. Karzov said he would agree with the UK police chief's recommendation "not to sing provocative songs."

"But we need to understand what it means in this case. Of course World War II (or Great Patriotic War as we call it in Russia) is a very sensitive topic and most of the people, not only in Russia, treat this period in world history with special care. Also, racism and fascism themes/propaganda are forbidden."

The 2018 World Cup in Russia is set to host fans of 32 soccer teams this summer, with matches taking place at 12 venues in 11 cities across the country.

Who Are The Five Greatest Footballers Ever to Have Graced the World Cup?