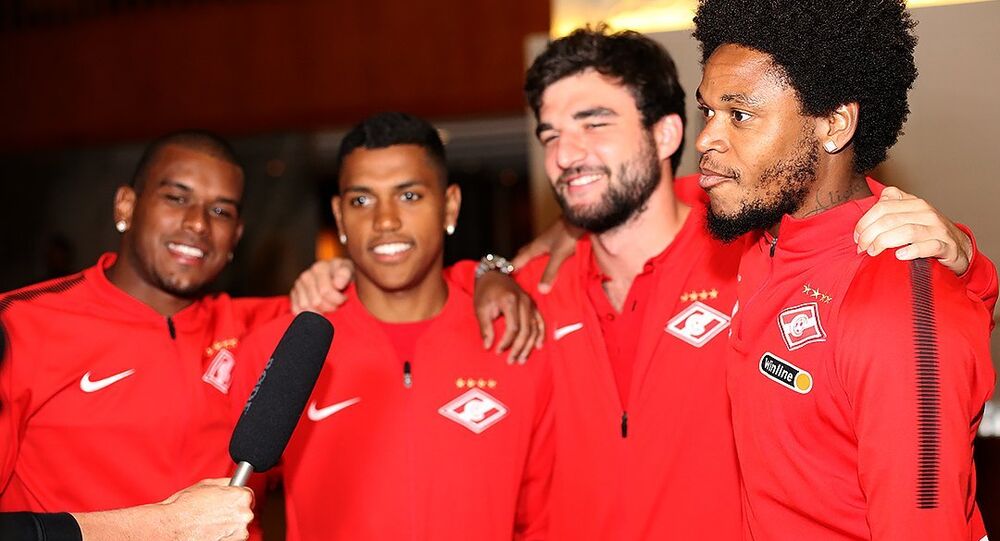 The dust has not yet settled around the Roberto Firmino – Mason Holgate scandal in the English Premiere League, but the British newspapers have found a new scapegoat, and have turned to launching racism accusations against Spartak Moscow just months before the FIFA World Cup in Russia. Was it just a coincidence or a pre-planned campaign?

Let's trace the story from the scratch.

On Saturday, Spartak Moscow and Russia international defender Georgi Dzhikiya was running the 2016/17 champion team's Twitter account and posted a video with a comment: "Watch the chocolates melting in the sun". The video captured three Brazilian players, namely Pedro Rocha, Fernando and Luiz Adriano, training on a pitch in Dubai. It shows the players in a good mood, with Russian-speaking Adriano replying to Dzhikiya's joke with a smile and a typical Brazilian hand gesture.

Triggered: Joke or Not, Let the Racism Crusade Begin!

This is when the UK media got really triggered, churning out a barrage of nearly identical stories running headlines alleging Spartak Moscow was marred by some kind of shocking racism scandal, while at the same time not hesitating to link the issue to the upcoming World Cup in Russia. They twisted the whole story in such a way that implicitly paints the country out to be racist.

"Russian club Spartak Moscow have landed themselves in the middle of a racism storm after they posted a video of some black members of their squad training in the sun," writes The Independent.

"Spartak Moscow are at the center of a racism row after their official Twitter account posted a video of three black players in training alongside a caption that translates as 'See how chocolates melt in the sun,'" says The Guardian.

"Spartak Moscow found themselves at the center of a racism storm on Saturday after a shocking tweet from the club's official social media channel," reads The Mirror.

"A social media message containing "racist references" posted by Russian club Spartak Moscow "shows a shocking level of ignorance," says the chief of anti-discriminatory body Fare," according to the BBC.

"UEFA will be under pressure to come down hard on Spartak following the disgusting tweet," suggests The Sun.

Actually there is no need to list all of the ways the story is being presented, and the phenomenon has spread beyond the UK-based media. Just type "Spartak racism" in Google to find a slew of copycat materials based on some comments from Twitter users (which are not provided, by the by) and the message from the anti-discrimination group Kick It Out.

'Love', 'Family', 'Friend': What the UK Media Didn't Tell You About the Issue

And here is what the UK media decided not to show, as it simply crushes their racism narrative about Spartak and Russia.

The club was apparently scared into deleting the tweet — though nothing can be lost in the Internet-verse. The team also apologized, underscoring that what was said was a joke, and not an insult.

So after what the UK media presented as "scandal" broke out, Brazilian midfielder Fernando appeared on social media, saying that "There is no racism in Spartak. We are all a close-knit family" in Russian. Before moving to Spartak from the Italian championship in summer 2016, Fernando had played in Ukraine and speaks Russian, and can distinguish between jokes and insults.

A following video showed the three buoyant Brazilian players from the Twitter post and Georgi Dzhikiya in a friendly posture, commenting on the "scandal".

"We have no racism in our team, we are all brothers, a big family," begins "the filmmaker."

"This is my friend, my brother, a legend", continue Luiz Adriano and Fernando, referring to Dzhikiya and bursting into laughter together.

"I love you, my friend," Adriano says, getting a kiss on the cheek from his Russian teammate.

"There is no racism in Spartak," Fernando reiterates, as they end the clip with everyone in a good mood.

However, the voices of Spartak players — the ones designated as victims by the UK media — were simply ignored. Well, who cares if they say they were not subjected to racism, when we decide they were!

It looks like this very real instruction was carried to the letter this time, as if completed using a template.

Thus, the UK media continued in their established tradition of demonizing the association football championship host country. This was initiated soon after the Euro 2016 in France with a BBC "documentary" trying to scare away people from Russia, where "monstrous" fans would rip them apart. The film quickly landed in hot water with even one of the interviewed fans exposing the lies in it.

To combat the hype instigated by foreign media outlets, Russians adopted the #Gentlefan practice of giving foreign fans blankets and raincoats during bad weather — but this story has been ignored by the British press.