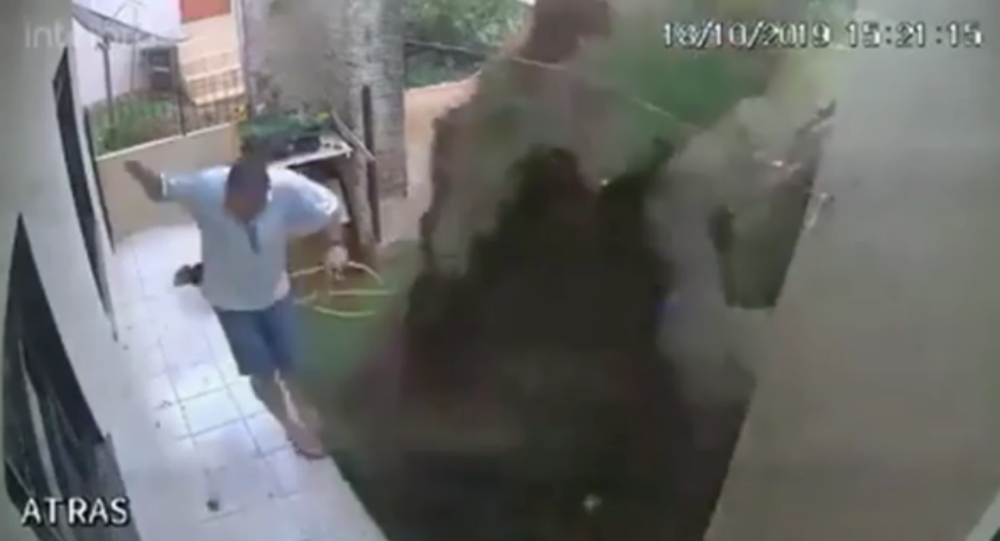 Cesar Schmitz, a Brazilian man hailing from the country’s Paraná state, learned a hard lesson on October 18 after his attempt at ridding his backyard of cockroaches led to a massive explosion and sent his dogs running to safety.

Home surveillance footage shows Schmitz lighting matches and throwing them toward the nest as his two dogs watch from opposing sides of the yard. But then, just seconds after he throws the third match, the entire yard explodes, sending massive chunks of turf into the air. The once-seated dogs are seen scampering away as a shocked Schmitz stumbles backward.

What the video doesn’t show, however, is that Schmitz had actually first deployed a spray for killing beetles, which sent the roaches out of their nest, and that he then proceeded to toss in a small dose of gasoline before dishing out the matches.

Citing an interview Schmitz did with Focus On News, the Daily Mail reported that it had completely slipped the Brazilian man’s mind that the combination of chemicals could cause such an explosive scene.

“I wish I'd thought this through before. I had no idea that this could happen,” Schmitz said. “Luckily the damage was only contained on the lawn. If I had been standing closer or the table had hit me it could have been fatal.”

Luckily, neither Schmitz nor his dogs suffered any injuries. However, the same cannot be said for the roaches, which are no longer a problem for the homeowner.