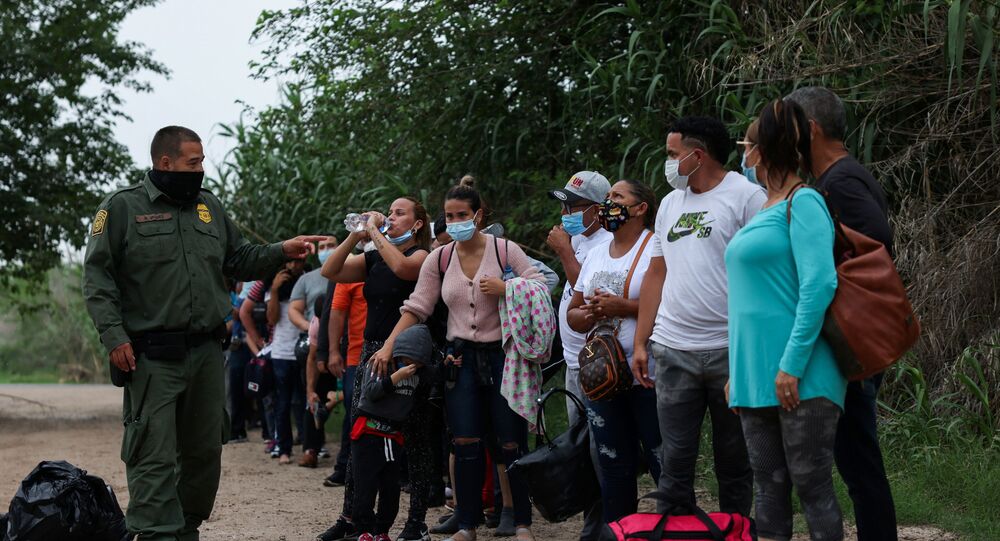 Both the state and the US in general have witnessed an unprecedented influx of illegal migrants from Central America this year. The Biden administration, however, sees supporting countries in the region as the solution, instead of strictly enforcing US immigration laws.

Law enforcement in Texas has started to arrest migrants crossing the US border illegally on charges of trespassing after Governor Greg Abbott declared a state of disaster and issued orders saying state troopers must put illegal aliens behind bars. Several hundred law enforcement officers have been deployed to the US border for this purpose. So far, only three migrants have been sent to jail under the new orders.

"Our fellow Texans and our fellow Americans are being threatened every day. […] Their lives and their properties and their families are being overrun", Abbott said earlier during a visit by Donald Trump to the border in June amid the immigration crisis.

A prison in San Antonio was repurposed at the behest of the Texas Department of Criminal Justice to host arrested migrants. The establishment was built to house 1,000 prisoners. Some $250 million in funding was allocated by Abbott to the new initiative, which sparked concerns among some counties in the state that the order is illegal – traditionally it is the job of federal migration authorities to make arrests related to violations of US immigration laws.

The Texas Department of Public Safety (DPS), however, is not apprehending migrants for violating these laws. Instead, the DPS is arresting those who are spotted on private property with clear no-trespassing signs or fences, thus allowing the authorities to put them behind bars for trespassing.

Not all Texas counties have reacted positively to Abbott's initiative aimed at reducing the influx of illegal migrants. The Rio Grande Valley, El Paso County, and the city of Laredo, regions that have seen the biggest spikes in the number of illegal migrants, have refused to declare a state of disaster, which is usually introduced when a natural disaster occurs, and to enforce Abbott's orders to arrest border crossers.

"We concluded we could not in good faith tell the people of our counties there is an emergency when there’s not an emergency", Hidalgo County Judge in the Rio Grande Valley Richard Cortez said.

Authorities in the "defiant" counties argue that the impact of the increase in illegal border crossings on their societies is not different from similar upticks in immigration seen in previous years. They also claim that the increasing number of illegal aliens arriving from Central America has not affected the crime rate – an apparent response to the talking point of many Republicans, which claim that many criminals come into the US along with the migrants.

While these counties have been exempted from Abbott's 28 June order, the Texas DPS still plans to execute it on their territory, even if local police refuse to take part in the effort. The criteria are the same: if DPS officers spot a migrant entering a fenced private property, they will try to apprehend them for trespassing. These plans, however, have reportedly angered the authorities in the counties. An unidentified Rio Grande Valley law enforcement official told The Wall Street Journal that they wouldn't tolerate such actions and would arrest DPS officers for "official oppression" in such cases.