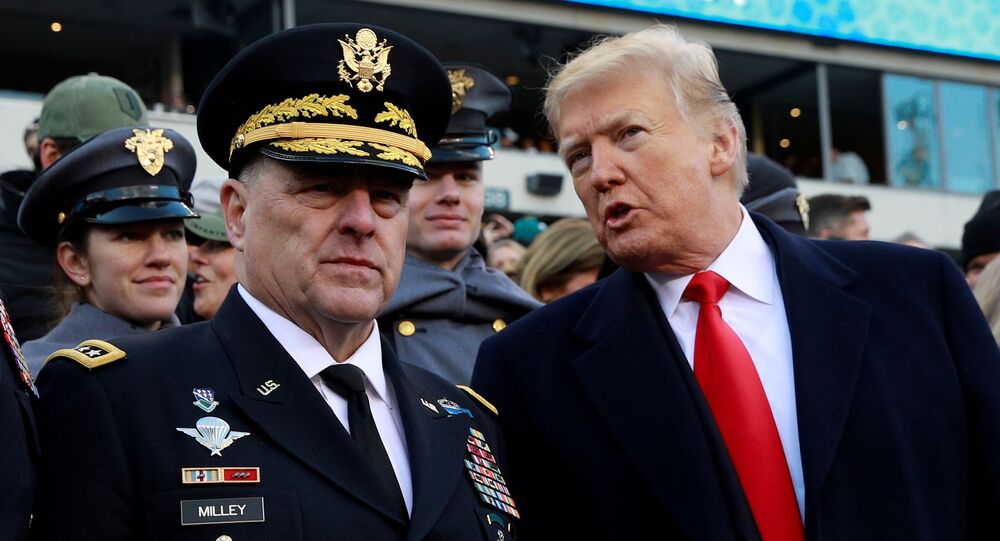 Last month, US media claimed that General Mark Milley was fearful that Trump might use the American military to stay in power after losing the 2020 election.

General Mark Milley, chairman of the Joint Chiefs of Staff, has described the US military as apolitical, declining to comment on reports that he feared a coup attempt in the final days of Trump’s presidency in January.

The top US general told a Pentagon news conference on Wednesday that he had always offered his “best professional advice” to presidents and that it isn’t the military’s job to “arbitrate” elections.

“[…] I want you to know and I want everyone to know, I want America to know, that the United States military is an apolitical institution. We were then and we are now", Milley added.

He was supported by Defence Secretary Lloyd Austin, who claimed later on Wednesday that Milley “doesn’t have a political bone in his body” and that “it’s really important to me that this department remains apolitical”.

The general’s remarks come after Washington Post reporters Carol Leonnig and Philip Rucker asserted in a new book that Milley had repeatedly been worried that then-US President Donald Trump might attempt to use the military to stay in office after losing his re-election bid.

The book argued that the general warned of a so-called “Reichstag moment” on 2 January, almost two months after Trump refused to concede defeat in the 2020 US presidential election.

According to the authors, the general feared that the president would resort to a tactic presumably used by Adolf Hitler, who created a domestic crisis by setting the Reichstag on fire and then came to the "rescue" of the country.

© AP Photo / Caroline Brehman
'I Said You're F***ing in Charge!': Trump, General Milley Blew Up at Each Other Over Racial Protest Response, Book Claims
None of the military-related scenarios purportedly considered by Milley saw the light of day as Trump transferred power to the Biden administration while continuing to allege that voter fraud had taken place during the 2020 election.

On the other hand, hundreds of Trump supporters besieged the US Capitol to stop Congress from certifying the results of the 3 November presidential election on 6 January, an attack that claimed the lives of at least five people, also resulting in widespread damage and vandalism.

Then-President Trump, via his now-suspended Twitter account, later urged his supporters to go home. He was then impeached for a second time over accusations of "incitement of insurrection". Trump's second impeachment trial in the US Senate, which he slammed as a "hoax" and a "witch hunt", came to an end on 13 February after only 57 US Senators voted to convict the ex-POTUS.