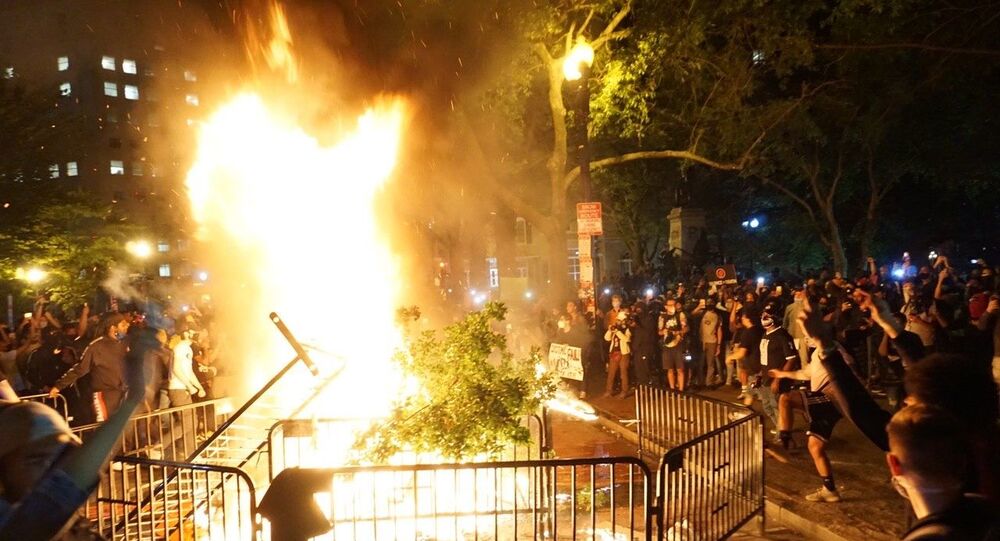 On Monday, Paul Allard Hodgkins, a 38-year-old Florida man who was seen carrying a large red "Trump 2020" flag in the US Senate chamber during the 6 January riot in DC was sentenced to eight months in prison after he pleaded guilty to a single felony count of obstructing an official proceeding.

The man, who had no criminal record, entered the Capitol unarmed, did not engage in any violence or damage any property, hoisted a flag, took some selfies and left. Overall, he spent roughly 15 minutes in the building, according to a court filing. Prosecutors asked for a sentence of 18 months in prison for the 38-year old.

"Although you were only one member of a larger mob, you actively participated in a larger event that threatened the Capitol and democracy itself", stated US District Court Judge Randolph Moss of Washington addressing the Florida man.

Hodgkins is the third person to be sentenced for being part of the DC riots, receiving the longest punishment so far. In June, Anna Morgan-Lloyd of Indiana received three years of probation after pleading guilty to illegally demonstrating in the Capitol, while Michael Curzio of Florida received six months in prison for the same charge.

"On one hand, the minimal sentence for Mr Hodgkins has to come as a disappointment to Democrats", said Dr Nicholas Waddy, associate professor of history at SUNY Alfred and a conservative speaker. "They talked in the aftermath of 6 January about charges of treason and insurrection, none of which have materialised. They talked about unseating Republican Congressmen and Senators for alleged complicity in 'insurrection'. That came to nothing. They tried to impeach President Trump (for a second time), and fell flat on their faces. So now they've put a man in prison for a few months for 'obstructing an official proceeding'".

"Jan. 6 was an act of domestic terrorism" declares the US Attorney overseeing the case of Paul Hodgkins, who was just sentenced to 8 months in prison. Hodgkins pleaded guilty to an "obstruction" charge which involved him taking selfies -- obviously the essence of "terrorism" pic.twitter.com/76QKEbfmzI

​Waddy draws attention to the fact that like others who protested that day, Hodgkins was unarmed: "No one shows up to an 'insurrection' with only a sign or a flag for a weapon against the combined might of the US federal government", he says. "That would be absurd".

Today, Paul Hodgkins will be the first 1/6 defendant sentenced on a felony guilty plea. He engaged no violence. His crime: entered the Capitol wearing a Trump t-shirt, held a Trump flag, took a selfie with Q Shaman. Prosecutors want 18 months in prison:https://t.co/4Olui6BIjc

​There never was an insurrection on 6 January, there was a riot, the professor insists, suggesting that the Florida man's sentence was just.

"Those who rioted should be punished. Fair is fair", Waddy says.

At the same time, however, the same logic should be applied to Black Lives Matter and anti-police rioters as well, he notes, referring to the violent 2020 summer protests in the wake of the death of George Floyd, a 46-year-old African American, in police custody.

© AP Photo / Marcio Jose Sanchez
A protester yells after a march to the Mark O. Hatfield United States Courthouse on the night of the election, Tuesday, Nov. 3, 2020, in Portland, Ore.

The 2020 summer riots claimed the lives of at least 25 people. In addition, the nationwide protests led to up to $2 billion of paid insurance claims over arson, vandalism, and looting, according to Axios.

The report also quoted the Bureau of Alcohol, Tobacco, Firearms and Explosives (ATF), stating that "since the start of the unrest there has been 81 Federal Firearms License burglaries of an estimated loss of 1,116 firearms; 876 reported arsons; 76 explosive incidents; and 46 ATF arrests".

Nevertheless, hundreds of BLM and Antifa rioters who were arrested last summer have seen their charges dismissed. Kristina Wong of Breitbart cites 485 cases in Manhattan, with 222 of them dropped while in the Bronx a whopping 73 cases of 118 were dismissed.

A similar trend was seen in Portland, Oregon, where almost half of the 96 federal cases against rioters involved in crimes, including assaulting federal officers, civil disorder, and failing to obey, were dropped, according to The Wall Street Journal. "Ten people have pleaded guilty to related charges and two were ordered detained pending trial. None have gone to trial", the WSJ summed up in April 2021.

At the same time, the US mainstream media which are now calling the 6 January incident "insurrection" described the 2020 summer unrest as "largely peaceful protests". Furthermore, last summer, Democratic municipal and state authorities were seen green-lighting the creation of crowded CHOPs and CHAZes – acronyms for the Capitol Hill Organized Protest and the Capitol Hill Autonomous Zone (CHAZ) – in their cities and states regardless of coronavirus restrictions.

© Sputnik
Seattle protesters against racism and police brutality in June 2020

Hodgkins' trial is just one example out of hundreds of January 6th defendants' cases that have prompted concerns about a double-standard approach towards BLM and January Sixers among US conservatives.

The Republican senators highlighted that despite numerous examples of violence occurring during the summer 2020 protests, "it appears that individuals charged with committing crimes at these events may benefit from infrequent prosecutions and minimal, if any, penalties".

"DoJ's apparent unwillingness to punish these individuals who allegedly committed crimes during the spring and summer 2020 protests stands in stark contrast to the harsher treatment of the individuals charged in connection with the January 6, 2021 breach of the US Capitol Building in Washington, DC", the lawmakers underscored.

© REUTERS / Shannon Stapleton
Police release tear gas into a crowd of pro-Trump protesters during clashes at a rally to contest the certification of the 2020 U.S. presidential election results by the U.S. Congress, at the U.S. Capitol Building in Washington, U.S, January 6, 2021.

To date the US Department of Justice has charged over 500 individuals stemming from the Capitol riots. In a series of op-eds Julie Kelly of American Greatness listed instances of alleged human rights abuses of 6 January defendants. The political commentator also described pre-dawn raids of January Sixers by the FBI, interrogations without an attorney, instances of handcuffing and intimidating individuals not accused of violent crimes in relation to the Capitol siege and having no criminal record.

When it comes to Hodgkins' case the judge's verdict was unmerciful and unjust, argued Kelly:

"Hodgkins' actions on 6 January on their face did not merit a prison term but the Biden regime must defend their insistence the Capitol breach represented the 'worst attack on our democracy since the Civil War' or that it was comparable to 9/11", she wrote. "They need to pretend that it is something other than political grandstanding. So every top Biden apparatchik, from Attorney General Merrick Garland and Director of National Intelligence Avril Haines to line prosecutors, gladly wields their unchecked authority to make these alleged terrorists pay".

Unaccountable & Armed With Sweeping Powers: What's Behind US Capitol Police Expansion Beyond DC?