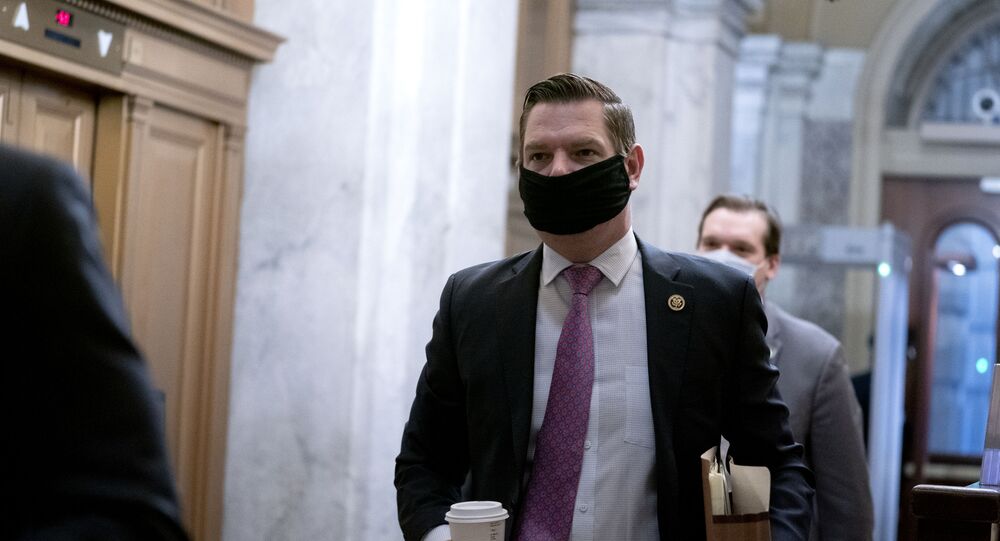 Since last year, Swalwell, known as one of the most outspoken opponents of former president Donald Trump, is in the midst of an ongoing scandal over his purported ties to an alleged Chinese spy, Fang Fang. Now, it has been revealed that the congressman has also a thing for luxury life.

The congressman from the Golden State seems to have been chauffeured in style, with his campaign spending over $10,000 on 26 rides from various limousine and luxury car providers, according to his FEC reports per a Fox News analysis. Swalwell's campaign also spent more than $26,000 on high-end hotels.

According to the LinkedIn profile of Swalwell's wife, more than $20,000 of the campaign cash spent at luxury hotels went to the Ritz Carlton, Half Moon Bay, where she reportedly worked as the hotel's director of sales until 2019.

As for his enthusiasm for alcohol, in nine consecutive orders ranging from $5.79 to $124.86, the lawmaker spent $566 on "Food & Beverage" in Boston, Massachusetts, through the liquor delivery service Drizly.

Swalwell also spent $1,151 on "Refreshments" from seven excursions to Capitol Hill Wine and Spirits, a liquor store on the House side of the US Capitol, and over $4,400 on "Catering" and "Refreshments" at two California wineries on the same day.

And as Fox notes, while the payments to the wineries may have been made as part of a campaign event, it is still unclear whether the seven charges at the Capitol Hill liquor store and the nine Drizly charges were tied to the campaign at all.

According to FEC data, the House Democrat's campaign spent over $7,000 in Washington, DC at high-end restaurants and steakhouses. Swalwell allegedly ate at Charlie Palmer Steak, O-Ku Sushi, STK Steakhouse in Downtown New York City, and other high-end restaurants for a total of 13 meals.

Additionally, Swalwell spent hundreds of dollars on food at expensive restaurants, according to six expenditures marked as "Catering" on the FEC listing, but those expenditures could potentially be from campaign events held in the capital, the outlet figured.

Swalwell also spent $205 on the website The Knot, which allows people to list their wedding registries, according to a file labeled "Supporter Appreciations."

Earlier this month, US media reported that Swalwell, his wife, and other members of Congress have been to Qatar on an all-expenses-paid trip sponsored by the US-Qatar Commercial Council, which is reportedly "dedicated exclusively to enhancing the bilateral business relationship between the US and Qatar."

© Photo : YouTube/FoxNews
'Security Threat': House Republicans Request FBI Briefing on Swalwell's Ties to Alleged Chinese Spy
Swalwell found himself in a media firestorm after it was revealed late last year that he was one of the people acquainted with an alleged Chinese spy named Fang Fang, who pursued relationships with prominent California politicians between 2011 and 2015. Swalwell, who has served on the House Committee on Homeland Security US House and the Permanent Select Committee on Intelligence, claimed he cut off contact with her as soon as he learned she was under FBI investigation.

However, the lawmaker confirmed that Fang helped him raise money for his election campaign, but claimed he never provided any critical information to her.