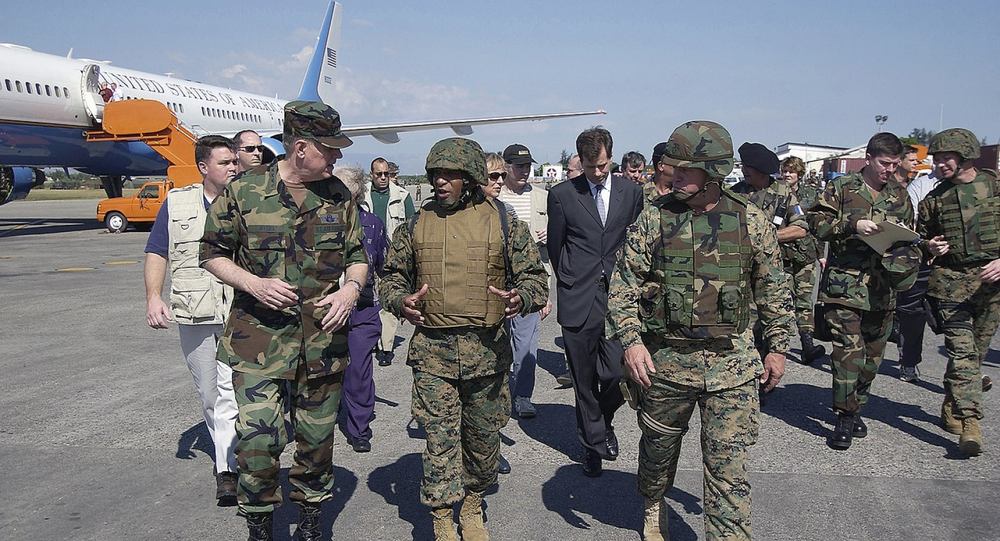 US Uses Slaying of Haitian President as Pretext for Further Occupation of the Country, Observers Say

At least seven of the 25 alleged Colombian mercenaries involved in the killing of Haitian President Jovenel Moise received US military training between 2001 and 2015 while serving in the Colombian armed forces, The Intercept reported last Saturday, citing a US government official.

Last week, the Pentagon confirmed to the Washington Post that a "small number" of suspected Colombian assassins had been trained by the US military. The DoD fell short of specifying how many, or when, or what type of training was provided. However, Adam Isacson, director of the Defense Oversight programme at the Washington Office on Latin America, revealed in an interview with The Intercept that between 2000 and 2018, the US administered the training of more than 107,640 Colombian security personnel, substantially exceeding any other military collaboration the US maintains in the region.

'Moise Used to be a US Puppet'

Although the operation resembled a US-backed "coup d'etat" or high-profile assassination fomented via proxy mercenaries, it appears highly unlikely that Washington is behind it, according to Tamanisha John of Florida International University (FIU).

"I think right now, if anyone can say that there was a definite role that the US played, they would be speculating, because Moise was backed by the Biden administration and also by the Trump administration," she explains. "Under Trump, he recognised Juan Guaido as the president of Venezuela and under Biden – Biden actually did agree with Moise that his term would not end until 2022."

Moreover, Moise was very friendly to the US and could be de facto called a part of the US puppet regime in the country, according to the journalist: "He was able to become president because the Clintons actually went to Haiti under the former president, Michel Martelly, and picked Martelly, who then picked Moise." On the other hand, the press never adequately covered anti-Moise protests in the country, she notes, stressing that his rule had all the earmarks of "dictatorship".

At the same time, it appears that the Moise assassination is being used as a convenient pretext to step up the foreign presence in the region, although the US, France and Canada are already heavily involved in Haiti, according to the journalist.

"I honestly foresee more foreign intervention into the country," John says. "I think that overall, media coverage, especially in the US and also in the UK, tends to have a very biased slant towards being pro-war and pro-intervention."

'US, UN & OAN Can't Fix the Problem They Created'

Moise was "a brutal and oppressive enemy of the Haitian people", says Professor Danny Shaw, author, activist, and professor of Latin American studies: "So we're really talking about the death of a dictator, of a neoliberal puppet, to quote the popular movements in Haiti".

The leftist movements in the country clearly wanted his ouster but they would not seek to assassinate him this way, the professor believes.

However, Moise's death is unlikely to change the deplorable situation in Haiti, according to the academic.

"This is a completely neglected, oppressed, exploited people," Shaw says. "The US sweatshops and US agribusiness continue to churn out their production, paying Haitians an average wage of about five US dollars per day – if that. So to quote the Haitian people, they woke up with hunger on Tuesday, the day before Jovenel Moise’s assassination, and they woke up with hunger on Wednesday just the same."

The further involvement of the US, the Organisation of American States (OAS), and the UN won't fix the situation, according to the professor: "Those responsible for the disease surely cannot also pretend to bring the cure." What they're going to try to do is use this as their rationale for the next US, UN and OAS invasion and occupation of Haiti, as they've done so many times in the past, he believes.

'International Community Should Step Back'

Haiti is the poorest country in the Americas, and has sustained serious political, economic and humanitarian challenges in recent years. Hundreds of thousands of households still need decent shelter following the 2016 Hurricane Matthew as well as the 2018 and 2010 earthquakes, according to a 2020 Human Rights Watch report. The government's failure to tackle the nation's socio-economic problems resulted in mass protests against Moise in 2019 which prompted a police response which some claimed constituted excessive force.

Amid the ongoing political crisis, the Haitian people do not need more interventions but a national dialogue where they can come together as a nation to facilitate the country's development, believes Jean Kinsley, a Haitian youth leader and political activist.

"I certainly hope that we will make the right decision, and the right decision is to have a national dialogue where we can pick a new leader and a new government that can tackle the most urgent issues that we are facing and especially the safety of the Haitian people, security problem," Kinsley says. "And the international community should be willing to accept the decision of the Haitian people."

Monique Clesca, a Haitian journalist, international development consultant and retired UN official echoes Kinsley: "I think a lot of people wish that the international community would step back and not tell us what to do and when to do it," she underscores. "And I think that is the sentiment. We have to try to get back to the Constitution, get back to some normal justice, normal law, something that everyone agrees to. When I say everyone, I mean the various political parties as well as civil society."

Morgan Artyukhina
Activists rally outside the US State Department against US involvement in Haiti, including the potential deployment of US troops after the assassination of Haitian President Jovenel Moise

Meanwhile, it was reported on Monday that Claude Joseph, who has led Haiti as acting prime minister since 7 July, would hand power to Ariel Henry, a 71-year-old neurosurgeon and public official as soon as Tuesday. Henry was appointed by Moïse to the prime minister post two days before the assassination. The former president dissolved parliament in January 2020 and got a free rein to appoint ministers while ruling by decree.

The Moise appointee and Joseph have been engaged in political struggle since the former president's death. However, Henry managed to draw support from the "Core Group", a collection of ambassadors to Haiti, including the US diplomat as well as representatives from the UN and OAS.

Earlier, on Friday, Colombian police officials announced that former Haitian justice ministry official Joseph Felix Badio may have ordered the assassination of Moise, citing preliminary investigation into the murder. Badio has not responded to the accusations so far, his whereabouts are unclear.