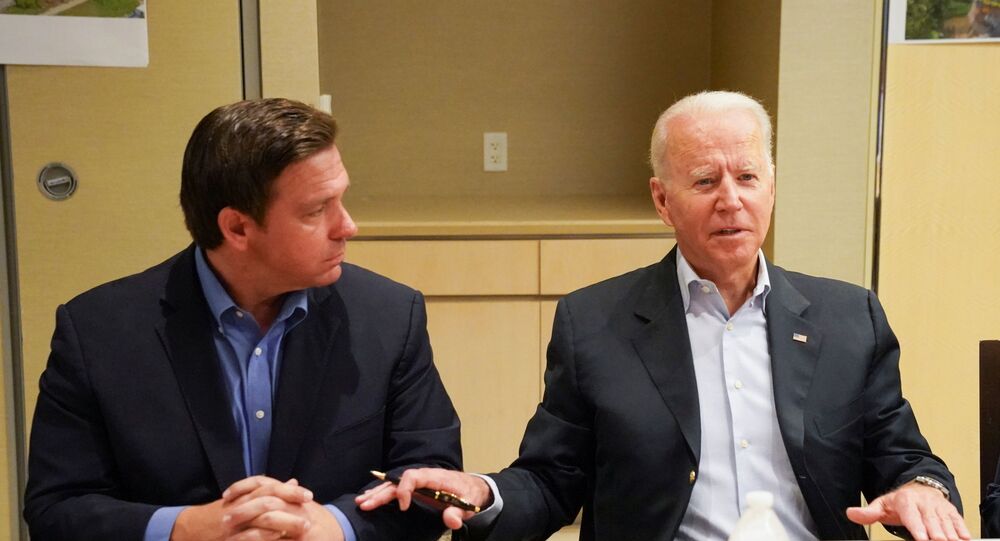 The southern US states are battling a migrant crisis which the Biden administration refuses to acknowledge, and Florida's governor has sent fresh law enforcement resources to Texas to help law enforcement counter a wave of illegal visitors.

Florida Gov. Ron DeSantis has slammed President Joe Biden's administration for a worsening migrant crisis along the southern border of the US, as he warned that many of the newcomers were actually bound for his home state.

Speaking to Fox News during his visit to Texas where some 50 Florida law enforcement officers are now helping local forces tackle an influx of immigrants, the governor said that he had learned from his state’s personnel that Florida was the “ultimate destination” for many of the illegals. And, according to DeSantis, Biden’s government was actually helping them get there.

“When they [immigrants] get turned over to the feds, what the feds are essentially doing is giving them a bus ticket and letting them go where they want to go,” DeSantis said, adding that this will have a huge impact on school systems and social programmes in his state.

The situation along the US' southern border has been a “total disaster” so far, the governor stated.

The disaster at our border is a direct result of the Biden Administration ending Trump border policies that curbed illegal immigration, the influx of drugs, and human smuggling. pic.twitter.com/TXhq8nsp3E

​DeSantis later clarified during the Monday press conference that “almost 70% of everybody that they [Florida law enforcement officers] have interdicted said their ultimate destination was the state of Florida”.

"If you have a huge percentage that are going to try to come to Florida, and I think Biden is paying for tickets on buses and flying folks around,” he added.

The governor pointed out that the crisis did not stop only at the border states, and, as the federal government was “failing” to address the situation and help Texas and Arizona, other states had to step in:

"If you think that having a wide-open border, 1,000 miles, however far it was away doesn’t affect here, you’re wrong,” he said during the press conference.

How Illegals Get Transported Across the US

Speaking from Texas during the weekend, the Republican also blamed the federal government for running a “secret” policy where they would fly “some of these illegal migrants in the middle of the night to different destinations and then house them either at federal facilities or with NGOs”.

“They do not inform the states of this,” he said. “There is no public accountability.”

DeSantis’ words followed a report from Fox News host Tucker Carlson that the Pentagon was using Laughlin Air Force Base in Texas to fly illegal immigrants across the country in passenger planes for “resettlement”.

Pentagon spokesman Chris Mitchell confirmed the base was indeed used by US Immigration and Customs Enforcement agents to transport “non-citizen movement” to other destinations.