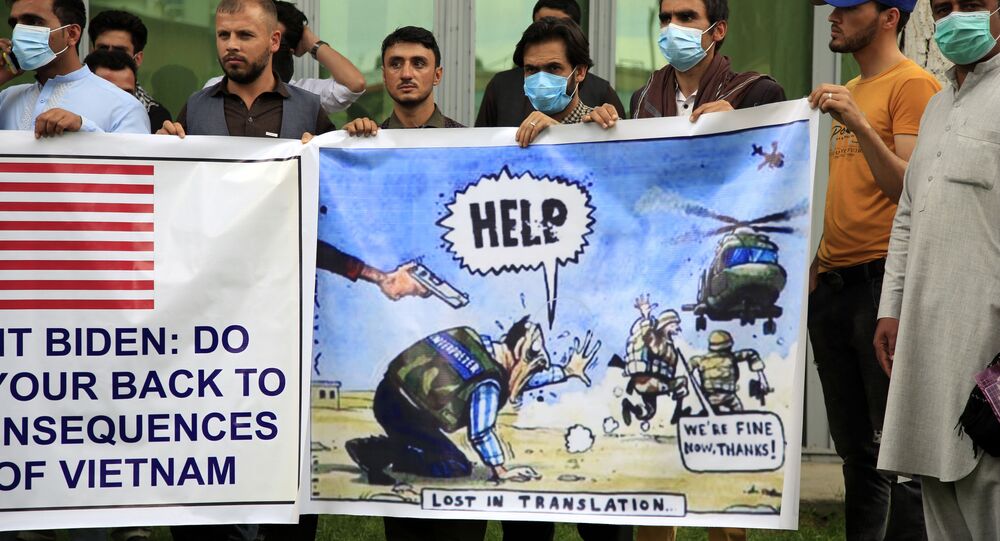 The fate of tens of thousands of Afghans who worked in various capacities to assist US and NATO forces in Afghanistan remains unclear as the Western alliance continues its rapid withdrawal from the war-torn nation after 19+ years of occupation. Some fear these people may be tortured or killed as 'collaborators' if captured by the Taliban.

The Pentagon has agreed to temporarily house Afghan interpreters and families who have completed the vetting process at the Fort Lee Army base in Virginia, State Department spokesman Ned Price has announced.

Speaking to reporters in Washington, DC on Monday, Price said the base would house about 2,500 individuals, and serve as an "initial relocation site" for the "pool of applicants who are closest to completing special immigrant processing."

The US will continue to assist in relocating Afghan nationals "who've been approved for the Special Immigrant Visa programme," the spokesman added.

As of 1 July, about 18,000 Afghan SIV applicants and as many as 53,000 members of their families were awaiting for approval to come to the US. Among them are thousands of people, including interpreters, drivers, security guards, embassy clerks, engineers and others who have worked to smooth the US's generation-long occupation of Afghanistan over the past 19+ years.

© REUTERS / Lucas Jackson
FILE PHOTO: A U.S. soldier from the 3rd Cavalry Regiment walks with the unit's Afghan interpreter before a mission near forward operating base Gamberi in the Laghman province of Afghanistan December 11, 2014.

In recent weeks, the acceleration of the US and NATO withdrawal from the country, combined with the Taliban's rapid advances, has led to fears that these people may be killed amid a bureaucratic backlog which has slowed the application process considerably and left many of them trapped in Afghanistan. Among the options looked at by officials in Washington were proposals to send some of the applicants to third countries before they could apply for a visa. On Friday, a source told Sputnik that Uzbekistan had received a request from Washington to host some of these Afghans. Describing the matter as a "very difficult issue," the source did not specify what Tashkent's response was.

On 8 July, President Biden confirmed that interpreters and others would begin to be evacuated this month, but did not specify where they would be taken or any other details about the evacuation plan.

The Taliban has publicly called on those who have helped the US military to "show remorse for their past actions" and for their "treason" against Islam and the country, with some of those who assisted the US fearing that they would be "slaughtered" if Washington doesn't "keep its promise" to care for them and get them out of Afghanistan.

However, on 9 July, the Taliban promised not to target Afghan translators who worked with the United States, with a spokesman for the group saying it would "guarantee that they can be in Afghanistan and live a normal life...unharmed." As with its other grandiose promises, it remains to be seen whether the militant group will live up to its commitments.