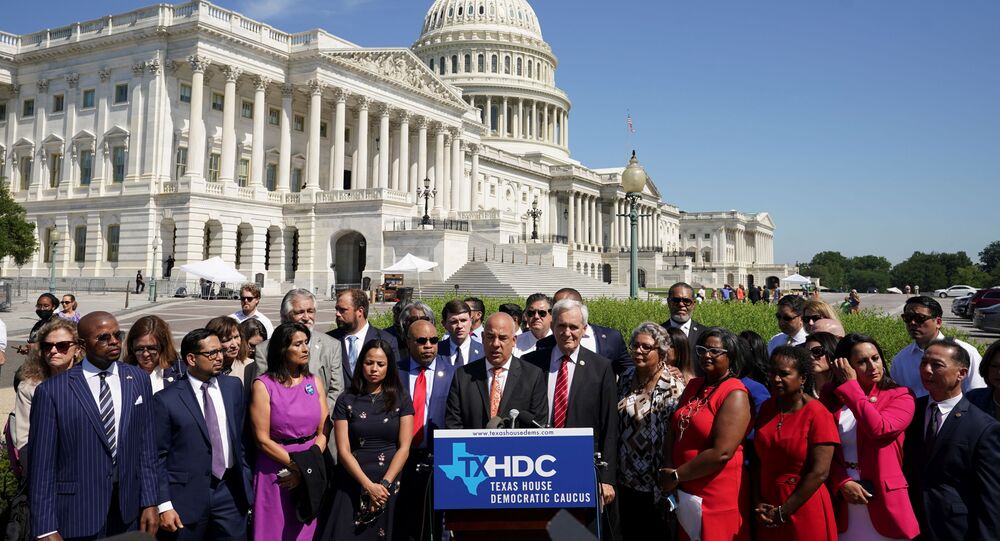 A number of Democrats from the Texas state legislature fled to Washington in a bid to prevent a Republican-led bill that involves a number of additional voting requirements from passing. The Dems spoiled the needed two-thirds quorum for the House of Representatives to vote on the legislation.

A group of Texas Democratic lawmakers has no plans to return to their state in the near future and will instead hold an online conference to discuss their fight against the Republican voting draft law, considered by some to be voting obstruction that targets certain social groups, the Washington Post reported on Sunday.

According to labour leader and civil rights activist Dolores Huerta, the conference, involving lawmakers and activists, will begin Monday and is expected to last through the next week.

Democratic members of Texas House, including Barbara Jackson-Lee and Joaquin Castro, the Service Employees International Union (SEIU) along with Mi Familia Vota, an organization that aims to encourage Latino voter activity, are expected to take part in the conference said to highlight voting practices proposed by Democratic lawmakers.

“With this conference, we will help prepare our voting rights champions for the fight ahead and we will show them that they aren’t alone in defending our democracy and fighting for us all,” Hector Sanchez, the CEO of Mi Familia Vota, said in a statement. “With COVID-19 protocols in place, this conference is the next step in our fight to pass the John Lewis Voting Rights act and the For the People Act.”

State Republicans, who currently control the two-chamber Texas legislature, are struggling to introduce additional securing requirements for future elections. In particular, they propose protections for poll watchers, mandatory ID verification for mail-in voting, video surveillance systems to livestream the larger polling stations and voting hours from 6 am to 10 pm instead of the round-the-clock work of polling stations.

In the 150-seat Texas House of Representatives, Republicans have a solid 83-member majority, against 67 Democrats. For a vote to take place, the presence of two-thirds of the chamber - a quorum - is required.

In total, 57 Democratic lawmakers left the state and plan to remain in Washington DC until August, to await the expiration of an emergency Texas Congress session that began on 8 July and will last for 30 days, at which time the restrictive voting draft laws will be dropped from the agenda.

The state's Senate on Tuesday passed one of the voting reform bills, Senate Bill 1 (SB1), which should have been later introduced in the House of Representatives.

Another bill, House Bill 3 (HB3), initiated by GOP Representatives at the House floor, contains the same provisions as SB1, additionally making it a crime for public officials to offer or provide vote-by-mail applications without first receiving a request from potential mail-in voters.

Due to the absence of the quorum in the Texas House of Representatives, both bills are currently on hold.

The Texas governor earlier last week noted that Republicans could use all legislative possibilities to get the bill passed and stressed that he would continue “calling special session after special session because over time it is going to continue until they [the Democrats] step up to vote.”

The governor also noted that GOP Representatives can request to have their Democratic colleagues arrested, and the Texas House voted on 13 of July to approve arrest warrants to potentially force the Democrats to discharge their duties. Those arrests can only be carried out in Texas.

According to state Democratic Representative Trey Martinez Fischer, the Dem lawmakers who "escaped" have requested a meeting with US President Joe Biden to discuss the filibuster that is obstructing the Democrats voting reform initiatives.

© REUTERS / EVELYN HOCKSTEIN
Ron Reynolds, a democratic member of the Texas Legislature, alongside other members speaks during a voting rights event in Washington, U.S July 15, 2021

Ahead of the most recent presidential elections, many US states, citing the need to comply with pandemic-related restrictive protocols, expanded access to mail-in voting. As the elections, described by Trump and some GOP lawmakers as fraudulent, concluded, some states imposed additional security measures to voting procedures.

So far, 17 US states, including Georgia, New Mexico and Florida, have passed 28 new laws, adding voting restrictions that include a shortening of mail-in voting deadlines, the abolishment of automatically mailing ballots for mail-in voting, and new ID verification requirements.

Republicans claim that their new voting restrictions will help prevent electoral irregularities, while Democrats note that the initiatives are violating voting rights in the US.

The new voting reforms are taking place in the run-up to the 2022 mid-term elections and amid a battle to impart new voting regulations on the federal level in the US Congress.